Botanically speaking, a fruit is the plant part that contains seeds.  Before the invention of modern refrigeration, fresh fruit was only eaten when it was in season.  To enjoy fruits at other times of the year, preservation was necessary.  Drying fruits by burying them in sand or sun-drying them is the oldest method, beginning in ancient Egypt over 6,000 years ago.  Plums, currants and cranberries are all native to northern Europe and Canada, and would have been the most common dried fruits in these areas.  Raisins were being imported to northern Europe in the 11th century, and dates and figs in the 13th.  Dried, rather than fresh, fruits are key ingredients in many traditional northern European and Canadian Christmas dishes.

Cranberries (Vaccinium spp.)
For many people, a Christmas turkey dinner would not be complete without cranberry sauce.  Cranberries are closely related to blueberries and grow in similar habitats: sandy and peaty soil.  Cranberries are sometimes harvested by flooding the entire field and scooping up the floating cranberries.  The North American cranberry (V. macrocarpon) is larger than the European cranberry (V. oxycoccus) or lingonberry.  Dried cranberries are used as substitutes for raisins and currants in fruitcakes, and are sometimes added to the Austrian fruit cake Kugelhopf.  Cranberry kisel is a popular dessert in Russia.  Cranberry or lingonberry sauce is a traditional accompaniment to roast turkey or goose.

Currants (Ribes spp.)
Although similar in appearance to raisins, currants are more closely related to gooseberries than to grapes.  Confusing the matter, a variety of small, dark raisins are called currants as well.  Currants are native to North America and Europe, and grow on shrubs that reach 1-metre.  Many currants have spiny stems and are easily identified by their lobed, palm-like leaves.  Historically, dried, wild black currants were put into fruitcakes and fruit breads by Canadian women before foreign fruits became common. 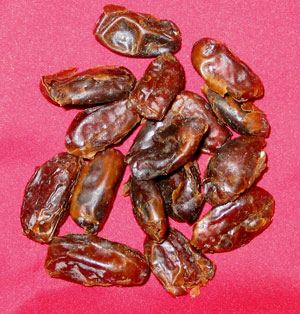 Dates (Phoenix dactylifera)
The date palm is one of the oldest cultivated fruits, being popular in ancient Mesopotamia and Persia.  Date palm trees can grow up to 30-m.  Dates grow in hanging bunches; a single tree can produce 1,000 dates a year.  There are hundreds of varieties of dates but only some are grown commercially.  The word date is derived from the Greek daktulos meaning finger and referring to the elongated shape of the fruit.  Dried dates are popular Christmas snacks plain or stuffed with nuts, almond paste or cream cheese.  Dates are sometimes added to British puddings and fruitcakes and are found in Canadian Matrimonial Cake (date squares). 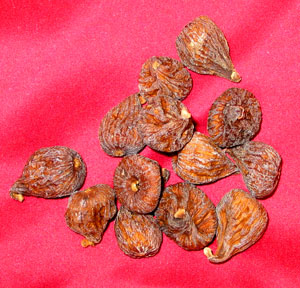 Figs (Ficus carica)
Figs, native to the Mediterranean, have been cultivated since the 4th century.  In fact, baskets of dried figs were found in ancient Egyptian tombs.  Since figs are highly perishable, they are mainly sold dried.  Figs are fleshy receptacles that contain many tiny fruits inside them called achenes.  Figs either self-pollinate or are pollinated by fig wasps that crawl into the fig to reach to flowers inside.  Figgy pudding was immortalized in the carol “We Wish You a Merry Christmas”.  The Greek cake Christopsomo is made with dried figs. 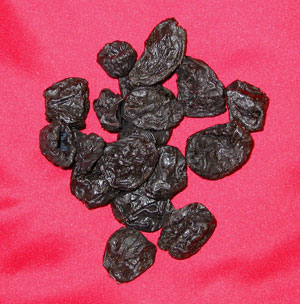 Prunes (Prunus spp.)
Prunes are simply dried plums.  However, only certain varieties of plums, those that dry well without stone removal and have high sugar content, are used to make prunes.  Prunes were traditionally sun-dried but modern drying facilities are used today.  Plum trees are found all over the Northern hemisphere and were the most commonly available dried fruit in parts of northern Europe for a long time.  Prunes are made into juice or added to fruitcakes and puddings.  Ironically, many recipes for “plum” pudding don’t actually contain plums but raisins.  The true identity of the “sugar plums” referred to in “Twas the Night Before Christmas” is debatable but probably refers to boiled, sugar-coated seeds rather than actual plums.

Raisins (Vitis spp.)
The grape varieties used to make raisins are table grapes rather than wine grapes.  The Sultana grape variety is most popular as they are seedless, eliminating the need to remove seeds after drying.  Table grapes seem to have originated in Western Asia and have been cultivated since ancient times.  Grape vines support themselves using modified leaves called tendrils.  Sensitive to touch, tendrils wrap themselves tightly around supports.  Raisins are common in Christmas breads like the Croatian Badnji Kruh, Italian Panettone and Czech Hoska and in the Newfoundland pudding Figgy Duff.  Butter tarts are an original Canadian dessert that contains raisins, dating back to at least 1900. 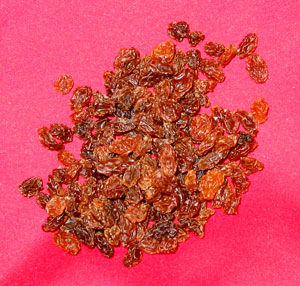 Dried raisins were popular in northern countries before fresh fruit was available in winter.

This blog is part of a series on The Botany of Christmas. Learn more in: