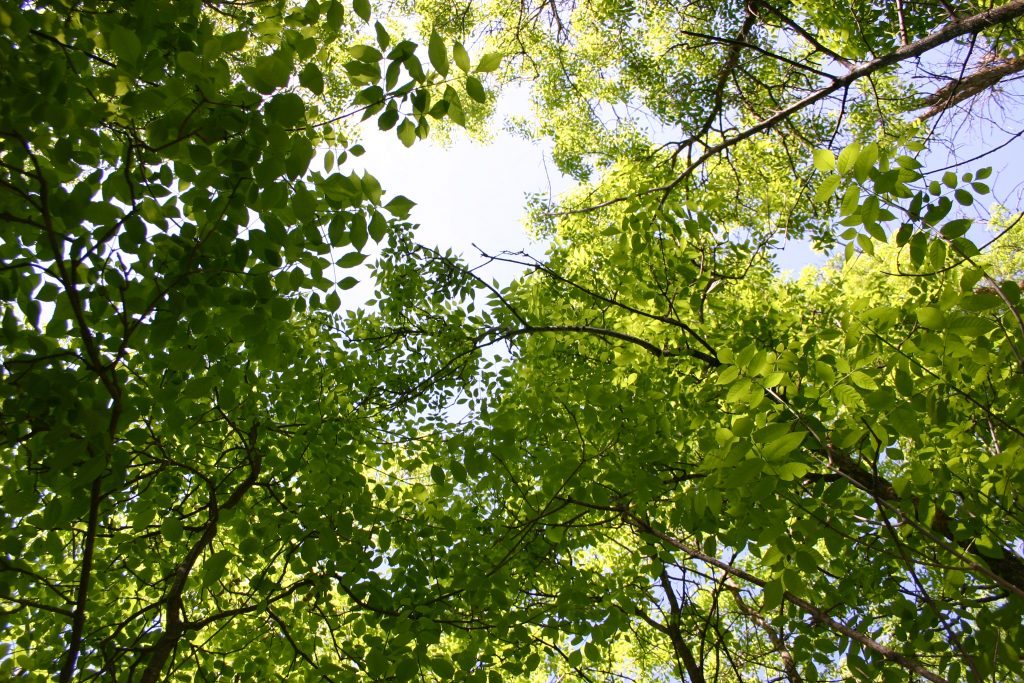 We humans tend to think that diseases affect only animals but plants suffer from them as well.  Diseases are caused by microscopic animals (like parasitic worms), fungi, bacteria and viruses and they affect animals, plants, fungi and even some species of bacteria (viruses that infect bacteria are called bacteriophages).  But it’s not just microorganisms that parasitize species; larger organisms do too. Some fungi are parasites of other fungi and some plants are parasites of other plants.   One good example that you may have encountered while going for a walk in the woods is the Lobster Mushroom (Hypomyces lactifluorum). This species of fungus parasitizes other fungi, often the mushrooms of milk-caps (e.g. Lactarius), distorting the shape and resulting in the bright orange colour.  Although some people enjoy eating these mushrooms, they could be poisonous if the mushroom that was parasitized was poisonous. 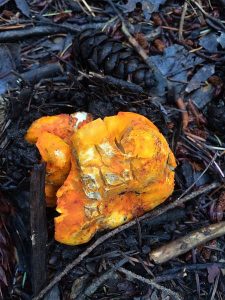 Fungi are sometimes infected by fungal diseases. This is a mushroom cap infected by the fungal parasite Hypomyces lactifluorum. You might recognize it by its common name: Lobster mushroom. Source: Wikimedia Commons

Another common parasite you may have encountered is Dwarf Mistletoe (Arceuthobium spp.).  Mistletoes parasitize trees such as white spruce (Picea glauca), causing strange broom-shaped branches, often called “witches-brooms”.  Mistletoes are actually flowering plants that cannot photosynthesize.  Instead, they have modified roots that can tap into the vascular systems of other plants to steal their sap.  To disperse their seeds, the fruits build up hydrostatic pressure, and then shoot the seeds into the air at speeds of up to a spectacular 80 km per hour!  The seeds are covered in a gluey substance, which helps them stick to the bark of trees.  The germinating seed sends its roots into the tree bark instead of the soil. 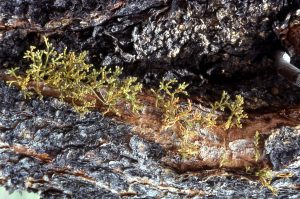 Parasites and diseases are what population ecologists call density-dependent causes of mortality; factors that only affect an individuals’ survival when populations are at high densities.  Other density-dependent factors affecting plant survival include: competition for resources, such as water, light and soil minerals, and intense herbivory (usually by insects).  In general, density-dependent causes of mortality are biotic, that is, caused by other organisms.  Density-independent factors of mortality are usually abiotic (not alive) or environmental: forest fires, drought and volcanic eruptions that bury vegetation in lava are a few examples.

There are plenty of plant parasites and diseases that evolved right here in North America.  However, most native plants have evolved methods to resist these organisms to some degree so it is not always fatal to the plant, unless it is in a weakened state.  During droughts for example, trees are much more likely to die of a disease.  Since the colonization of North America occurred, species of diseases that were not native to this continent have been accidentally introduced, typically with dire consequences.  In my next blog, I will be discussing how three species of native Canadian trees (American Chestnut, American Elm, and Green Ash) are being negatively impacted by introduced diseases, and how we can change our behaviour to protect our forests, both wild and urban.