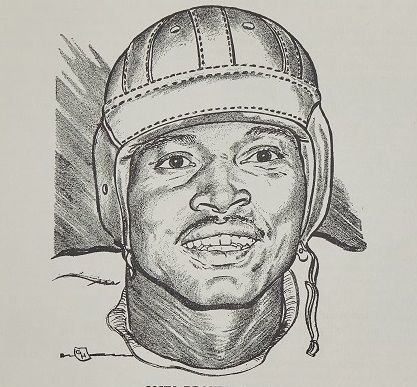 Whether professional or amateur, Winnipeggers love their sports. Winnipeg’s relationship with sports is part of the Manitoba Museum’s Winnipeg Gallery, where over 100 ‘new to the public’ artifacts are on display. Among the artifacts are a Winnipeg Blue Bombers pin and a game programme from 1952. Further information about the team and the artifacts can be found in the digital kiosks in the gallery, but the pandemic means that we’ve had to close the kiosks to the public. That, however, doesn’t mean we can’t take a look at some aspects of the Blue Bombers’ history. 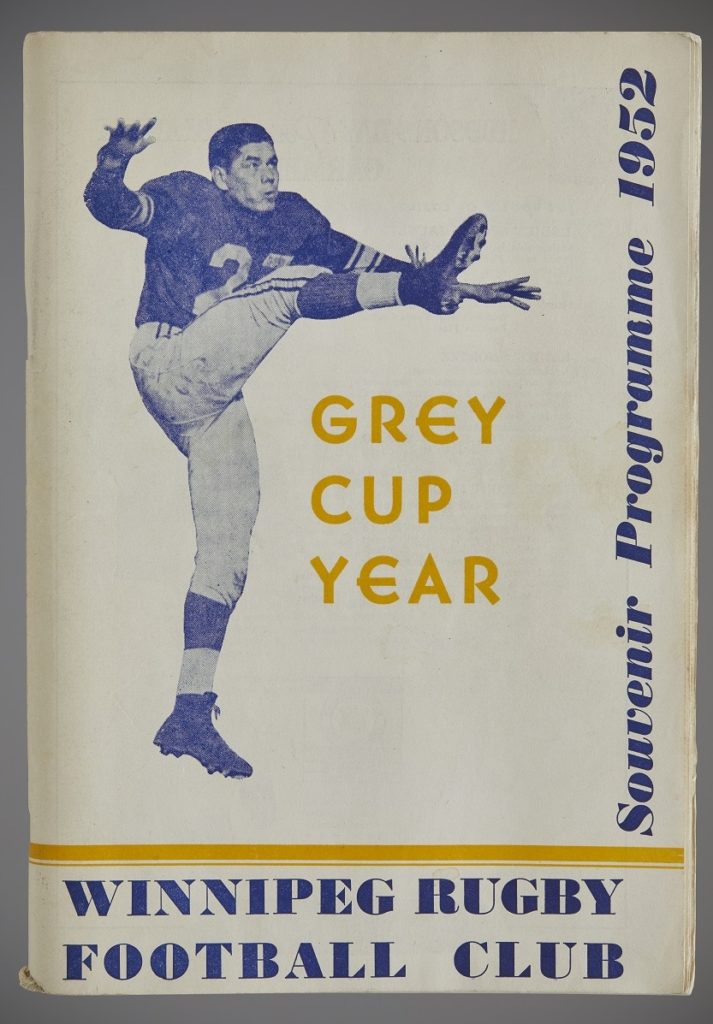 Football has been present in some form or another in Winnipeg since at least 1879. In that year, three teams – the Winnipeg Rugby Football Club, St. John’s College, and the Royal School of Infantry – formed a league. At the time, the sport was often referred to as “rugby football” due to rule similarities. By 1911, there were teams in other western provinces and the Western Canada Rugby Football Union was started. This league had a championship trophy called the Hugo Ross trophy, donated to the league by Winnipeg businessman Hugo Ross. Tragically, Ross was on the Titanic when it sunk. The trophy was awarded until 1935 to the winner of the Western Canada Rugby Football Union and until 1947 to the winner of the Western Interprovincial Football Union.

Has the team always been called the Blue Bombers and have they always worn the Blue and Gold? Well… no. In 1930, the Winnipeg Football Club merged with the St. John’s team. The new team was given what might just be the best name in the history of sports names: the Winnipeg Winnipegs! ‘Pegs for short.

At first, the ‘Pegs’ uniforms were green and white… which may upset some current fans, as those are the colours of the Bombers’ chief rival, the Saskatchewan Roughriders (a team that is unable to count to 13)! Luckily, the ‘Pegs only wore those colours for two years before switching to the more familiar blue and gold. As for the name “Blue Bombers,” legend has it that long-time Winnipeg Tribune sportswriter Vince Leah came up with it prior to a game. Popular boxer Joe Louis had been nicknamed the Brown Bomber and Leah allegedly borrowed from that, calling the team the Blue Bombers. It seems to have stuck! 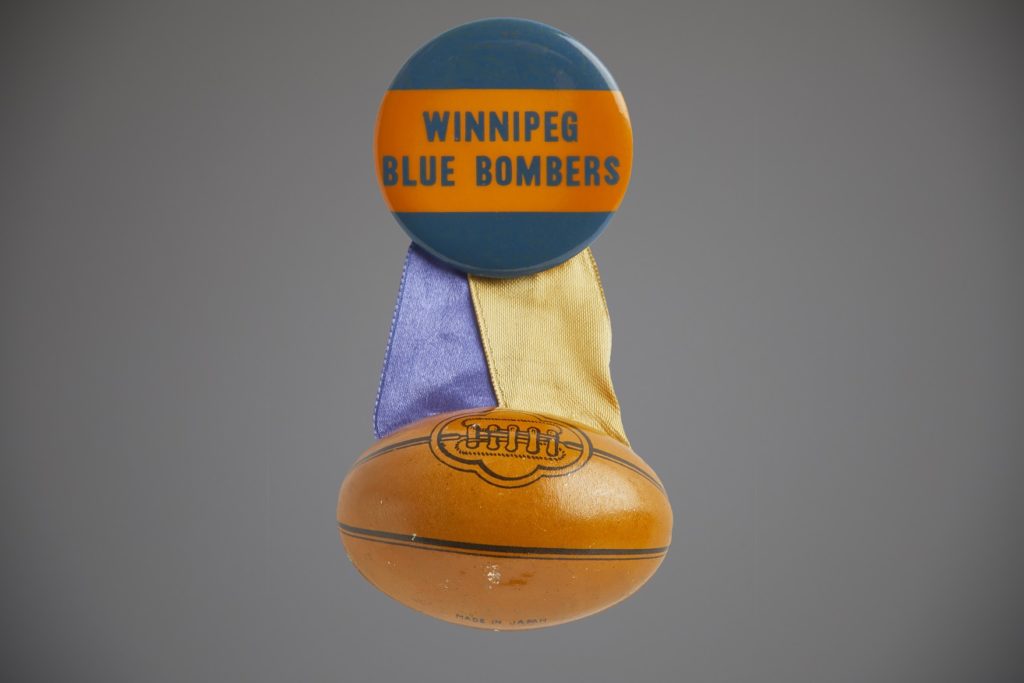 The team played at Wesley Park before moving to Osborne Stadium, near the Legislature, in 1935. They played there until 1953 when they moved to Winnipeg Stadium. Winnipeg Stadium was often referred to as ‘The House That Jack Built,” due to the electrifying play of Jack Jacobs, from the Cherokee Nation, who was the Bombers’ quarterback from 1949-1954. In 2013, they began playing at IG Field at the University of Manitoba campus. Unfortunately, the Covid-19 pandemic led to the cancellation of the 2020 Canadian Football League season. The league is scheduled to resume regular season games in June, 2021, but until then, the Blue Bombers are the reigning Grey Cup champions! 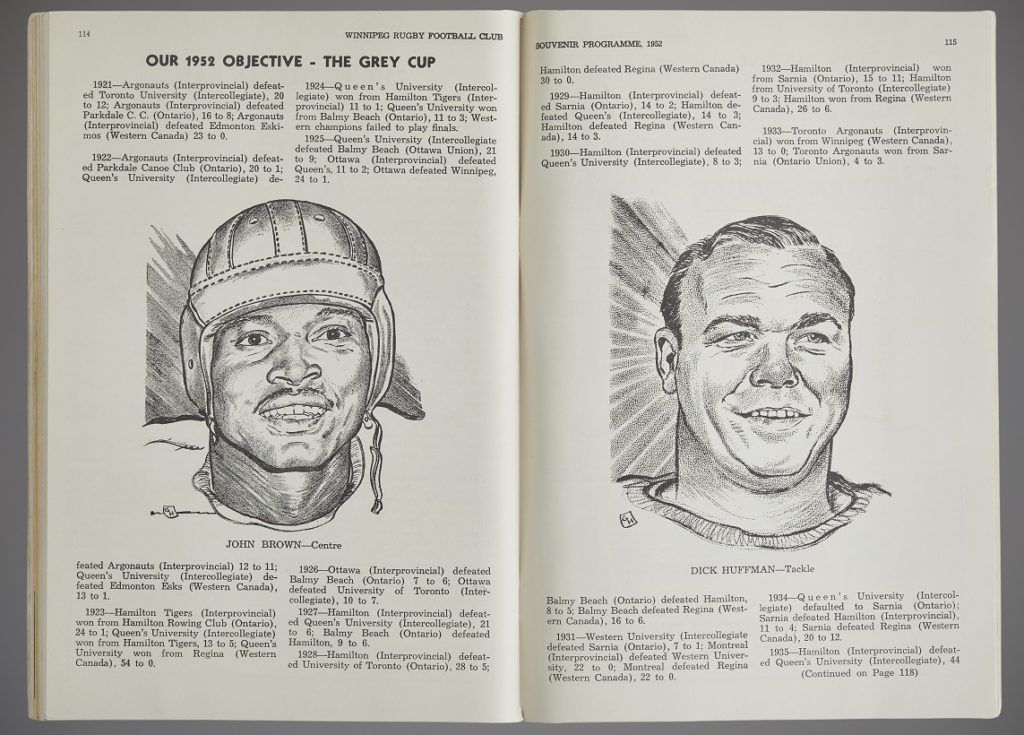