It’s time for the sweaty part of the blog – not the panicky sweating type of emotion I first experienced when large fragile artifacts were being transported all over the city – but literally sweaty in the sense that big artifacts get your muscles moving prepping them for exhibition.  Our first workout began after the stained glass window was delivered to Prairie Studio Glass for its complete restoration. Prairie Studio undertook the joyful task of dismantling the entire window, which started with making a template and numbering over 300 pieces of glass.  Next, the components were taken out of the original wood frame and piece by piece placed into containers.  That’s when the conservation team decided to join in on the fun and help scrub 100-year-old putty and dirt off each individual piece.  After three and a half hours, and only a small section of the puzzle back together, Conservation Technician Loren Rudisuela and I decided we would leave the rest up to Prairie Studio Glass staff.

The second time the Loren and I went back to the studio was to help squish new putty in-between the lead came after the pieces were put back together in their new frame.  This was a lot of elbow and thumb grease to make sure everything would be secured.  A few weeks later and the big day arrived for the window to be installed into its new wall niche, again making me sweat a little more watching it being hoisted about fifteen feet in the air after having it painstakingly restored.  But everything went according to plan and you can now see this amazing artifact on display in our new Winnipeg Gallery! 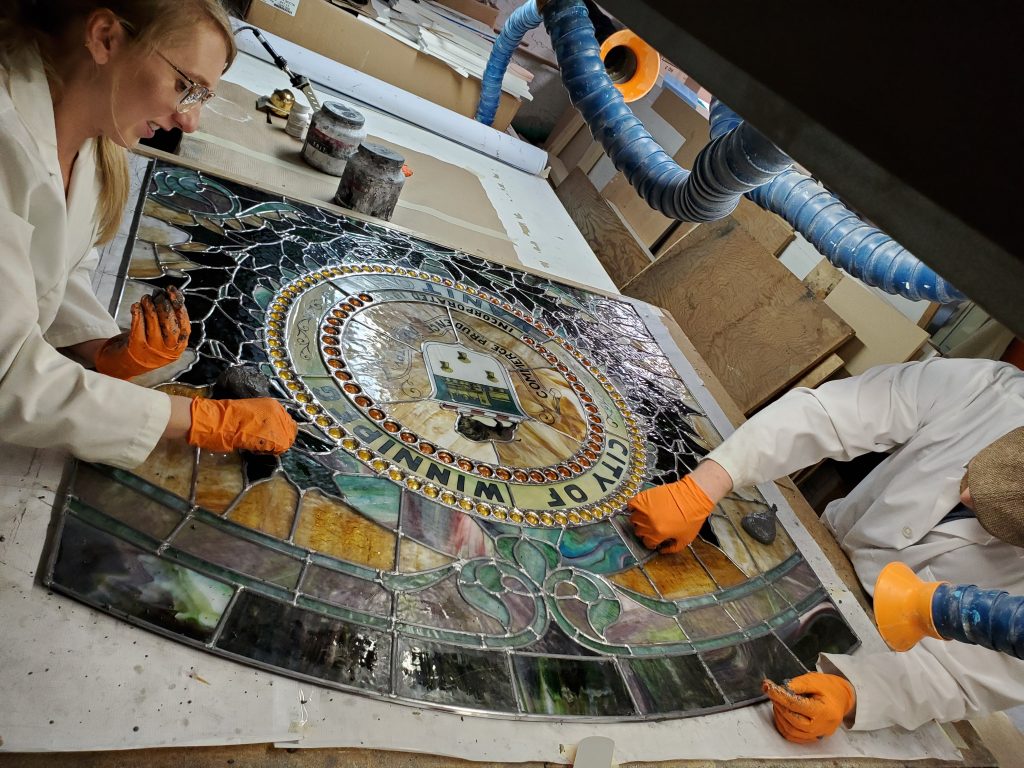 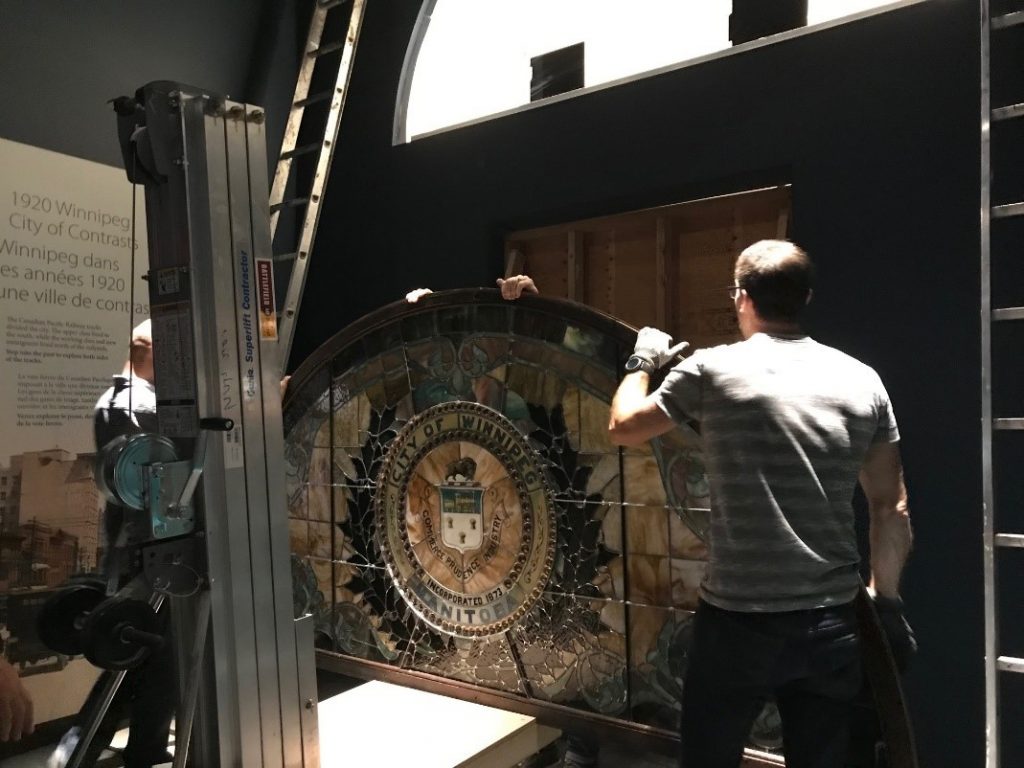 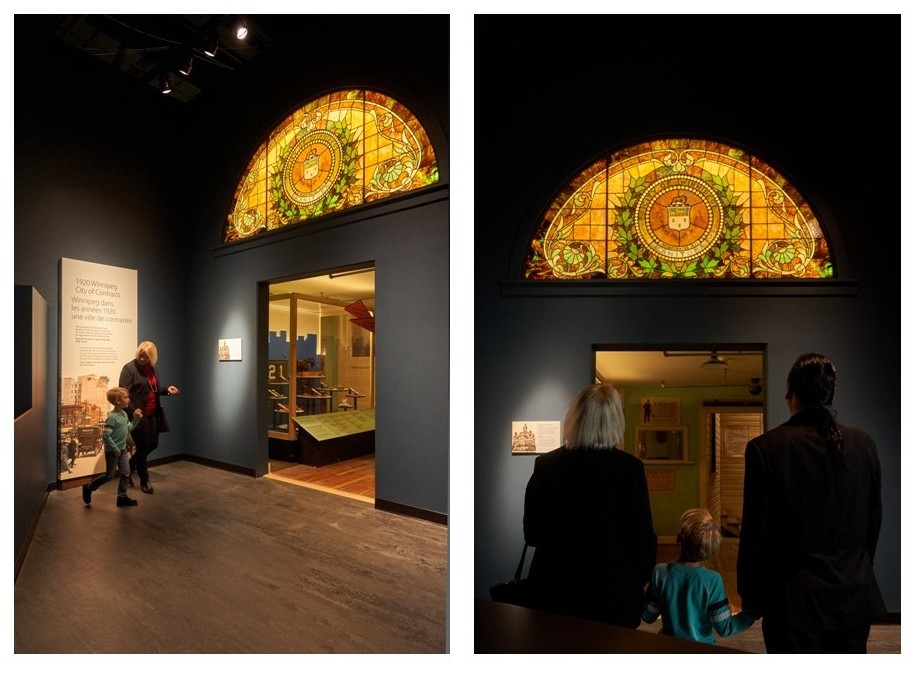 Another big workout was prepping the Eaton’s lintel for its debut and installation.  Architectural features are beautiful to look at, however harsh outdoor environments can really change the finish to some of the materials.  For our Eaton’s lintel, the visible deterioration was mainly on the brass components where years of oxidation, rain, snow … lots of snow … and pollution left a layer of thick corrosion along the surface.  Once again, we rolled up our sleeves and spent several days scrubbing off the corrosion. 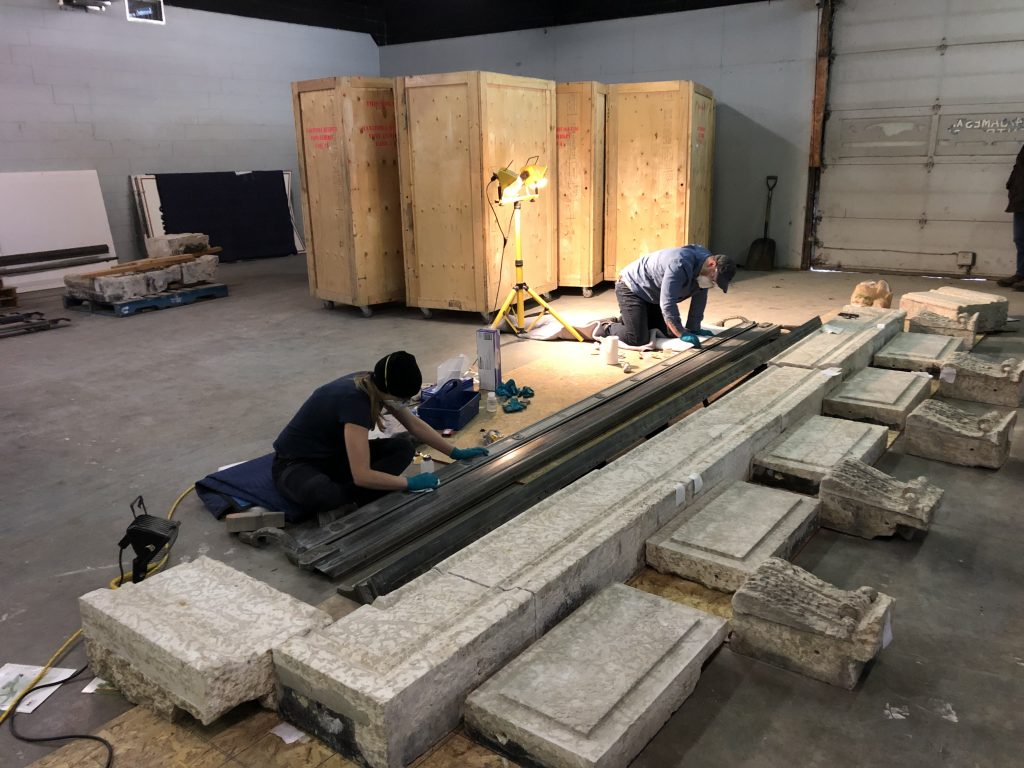 Carolyn and Loren cleaning the brass on the Eaton’s lintel.
Image: © Manitoba Museum

Another added touch to the treatment included making a replica rosette for one that was missing.  Installing this artifact was a monumental feat on its own as it required careful lifting, mounting and engineered bracketing in order to ensure its long-term preservation.  Now in its new home, I think I can finally put down the workout towel for a little bit – until the next big artifact rolls into the lab. 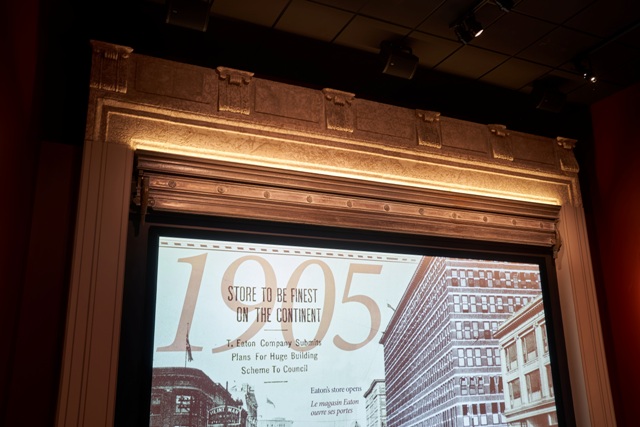