The Arctic explorer and HBC employee Dr. John Rae maintained his enthusiasm for Peter Halkett’s invention through several expeditions.  A Halkett boat was left for him at Sault Ste Marie in 1845, and in the record of his first Arctic voyage in 1846-47, he referred to it in glowing terms.  Rae described Peter Halkett as “the ingenious inventor of the portable air-boat, which ought to be the travelling companion of every explorer.”  In August 1847 Rae reiterated his enthusiasm for the Halkett boat:

During the whole of our spring fishing Halkett’s air-boat was used for setting and examining the nets, and was preferred by the fishermen to the large canvas canoe, as it was much lighter, and passed over and round the nets with more facility.  Notwithstanding its continued use on a rocky shore, it never required the slightest repair. It is altogether a most useful little vessel, and, as I have said before, ought to form part of the equipment of all surveying parties, whether by land or sea.  (John Rae, Narrative of an Expedition to the Shores of the Arctic Sea in 1846 and 1847, London, T. & W. Boone, 1850, 116, 176.) 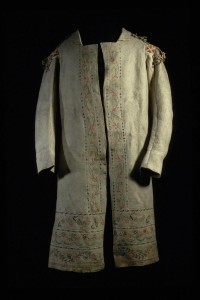 Métis or Cree Moosehide Coat collected by John Halkett on his 1821-22 visit to the Red River Settlement. With its combination of European form, floral decoration, and indigenous materials, this coat is a fine example of early nineteenth century Métis or Cree art. TMM HBC 34-30-A.

While the Halkett boat in the HBC Collection evokes the heroic era of Arctic exploration, and remarkable characters like Sir John Franklin, Sir George Simpson, and Dr. John Rae, the associations extend further.  The inventor of the boat, Lieutenant Peter Halkett (1820-1885) of the Royal Navy, was the son of John Halkett (1768-1852), a major shareholder in the HBC who became a member of the company’s managing London Committee in 1811.  Peter Halkett’s mother was the sister of Lord Selkirk, another major shareholder in the HBC, and the initiator of three schemes to relocate displaced Highlanders from Scotland to British North America.  The last of these, in 1811, included a large land grant from the HBC in Rupert’s Land, centred on the forks of the Red and Assiniboine Rivers, which became the Red River Settlement, and later the Province of Manitoba.  When Selkirk died, John Halkett became the executor of his estate, travelling to Canada, Rupert’s Land, and the Red River Settlement in 1821-22 as part of his duties. 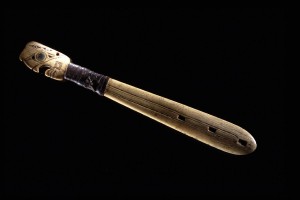 Nuu chah nulth Whalebone Club collected by John Halkett. This is one of several Northwest Coast objects in the Halkett collection. TMM HBC 38-25.

In his travels, he assembled a collection of objects produced by Inuit and First Nations societies from Hudson’s Bay to the Northwest Coast, which today forms an important

and well-documented part of the HBC Museum Collection. Many of the objects John Halkett collected are on permanent exhibit in the HBC Gallery of The Manitoba Museum.