You may ask yourself what is an atlatl? An atlatl is a hunting tool that is in two parts, a dart or very thin spear and a throwing board which is used to propel the dart. In most of North America it was the hunting tool of choice for many thousands of years. Archaeologists often use the size of projectile points as indication of which hunting tool was used. To the best of our knowledge somewhere around 3,000 years before present the bow and arrow was introduced. For about 1,000 years atlatls and bows and arrows were used together. Somewhere around 2,000 years ago the atlatl fell out of favour and the bow and arrow was the main hunting tool. Exceptions to this exist in the arctic and in the southern states and Mesoamerica, where the atlatl continued to be used until European Contact.

The parts of an atlatl are mostly made from perishable materials like wood, hide and sinew. The most common evidence of the atlatl in Manitoba is midsized stone spear points. While this may be the archaeological interpretation it is almost impossible to know for certain what hunting tool a spear point was attached. Some of these points could have been attached to thrusting spears, or used for other purposes. To positively know what a spear point was attached to you would need excellent preservation of the wood shaft which has not occurred in Manitoba. 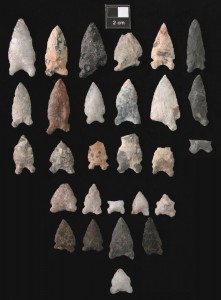 Another clue that atlatls were used in Manitoba is the recovery of stone or antler atlatl weights. It appears that these may not have been always used with atlatls since they are uncommon. In the entire 2.5 million artefacts held by The Manitoba Museum only 17 are atlatl weights. In comparison the collection includes over 8,500 projectile points many of which we believe were used with the atlatl.