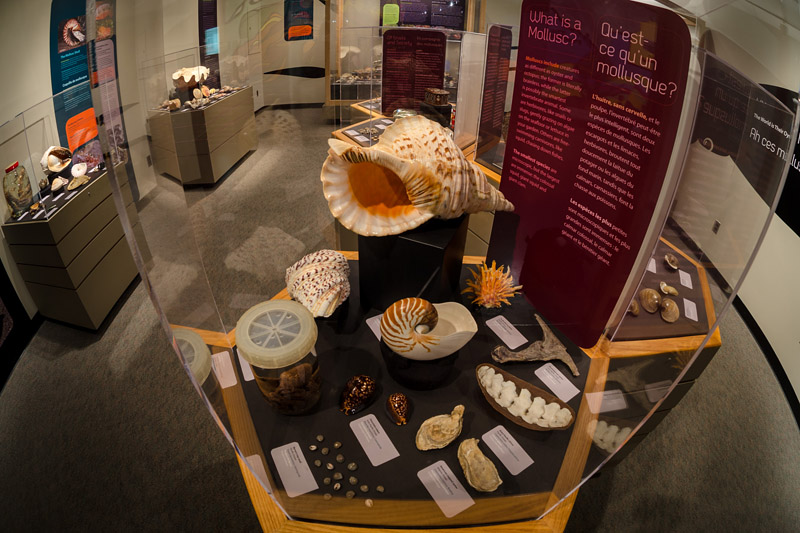 This has been a year rich in exhibit work, and we are finishing off with a bit of a bang. About a week ago we finished installation of our latest Discovery Room exhibit, a collaboration between Zoology and Paleontology entitled The World is Their Oyster: Marvellous Molluscs. As with the other D-Room exhibits we have produced (such as Jaws and Teeth and Colours in Nature), this was a collaborative effort. It was a pleasure to again work with Randy Mooi on selecting suitable specimens and preparing copy, and to collaborate with our superb collections and exhibit staff to produce the finished exhibit. 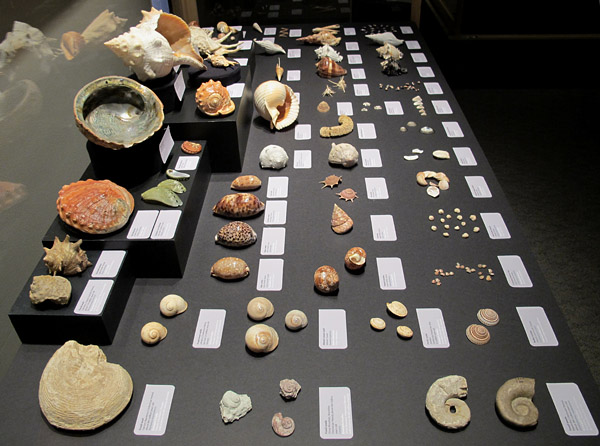 Gastropods (snails and their relatives) are the most diverse molluscs, so it seemed appropriate that the gastropod case should hold the greatest variety of specimens!

The idea for this exhibit was quite straightforward: to select suitable specimens from our permanent collection, which would depict the wonderful diversity and variability of molluscs. We also wished to give visitors a bit of information about the long fossil record of molluscs, their evolution, and a few “case studies” of particular molluscs or features.

This seemed like a simple sort of thing to do, but of course the view on the ground is never the same as that from 30,000 feet. Most of our issues were associated with the sheer number of mollusc specimens housed in our collections. We knew that there would be many excellent examples to choose from, but we did not appreciate quite how difficult this would be. There were so many to consider that, whenever we chose one beautiful snail for the gastropod case, it seemed there were at least 10 other good ones that could not be included. 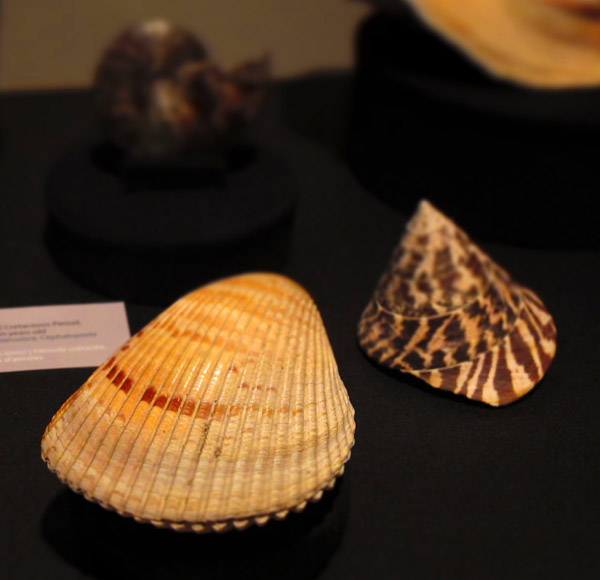 Specimens in the mollusc diversity case

The other issue was that molluscs are just so darned interesting, weird, and complicated in their life stories, dietary habits, and evolution. We kept discovering unusual things that we had not been aware of (or at least, I did; I suspect that Randy already knew some of these things). As a result, more and more new ideas came forward, and it was very hard to decide what we could include in the modest panel copy that accompanies the specimens. We were grateful that Stephanie Whitehouse, the designer, was so clear in telling us exactly how much space we had! 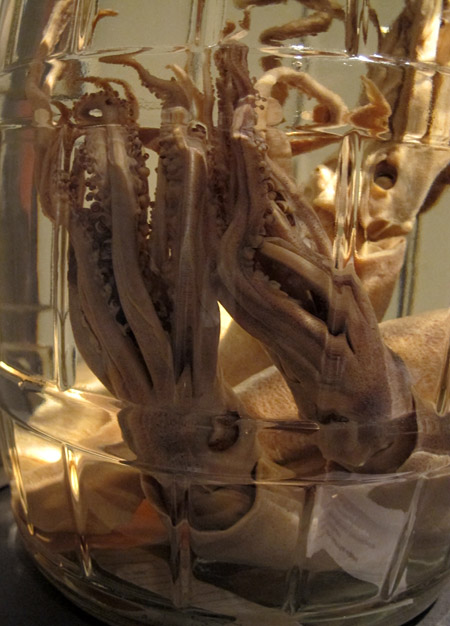 As issues and problems go, these were obviously good ones to have. And as these photos show, we were able to share a great variety of beautiful and appealing mollusc material. You will just have to imagine what the cases might have looked like if we had been able to include every single specimen we considered worthy of exhibit! 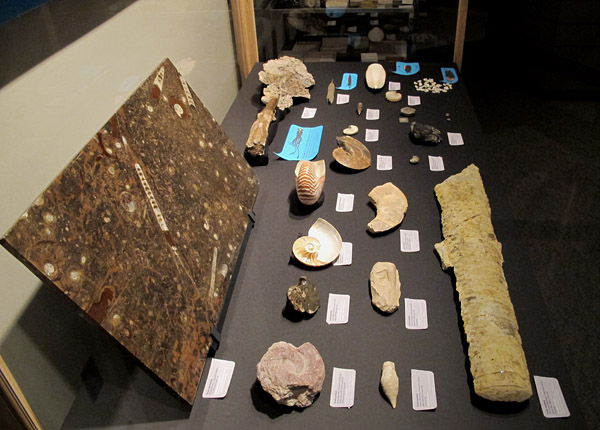 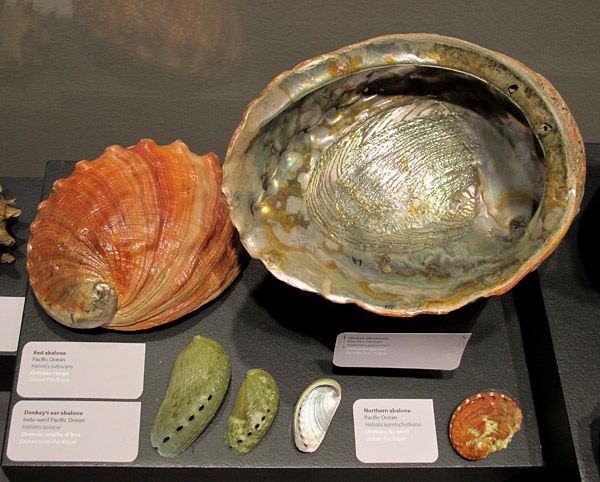 A variety of abalones 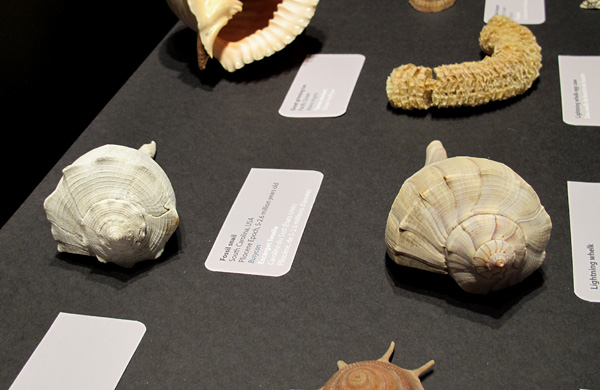 One of our primary objectives was to exhibit modern and fossil examples of closely related creatures. This photo shows a fossil lightning whelk (Busycon sp.) from Pliocene deposits in South Carolina (about 2.6-5 million years old) beside one of its modern relatives. 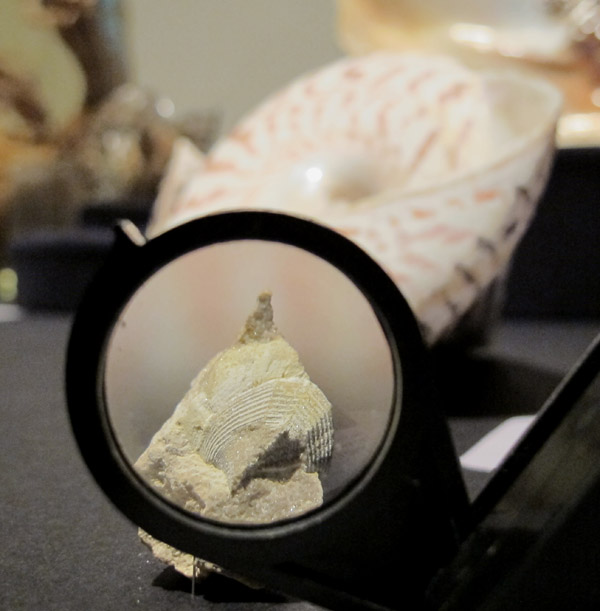 The view through a magnifier shows the fossil Conocardium from Ordovician rocks at Garson, Manitoba (a member of the extinct class Rostroconchia; about 450 million years old). 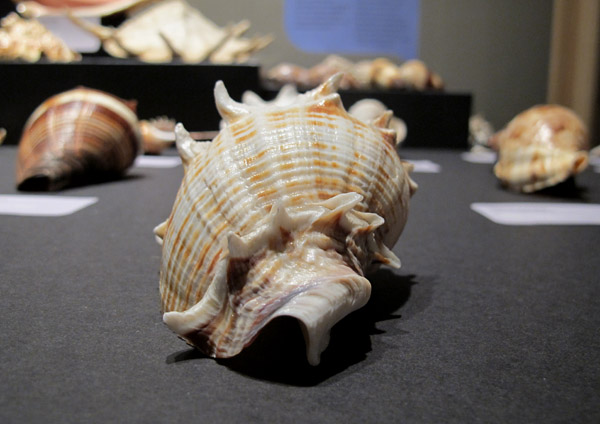 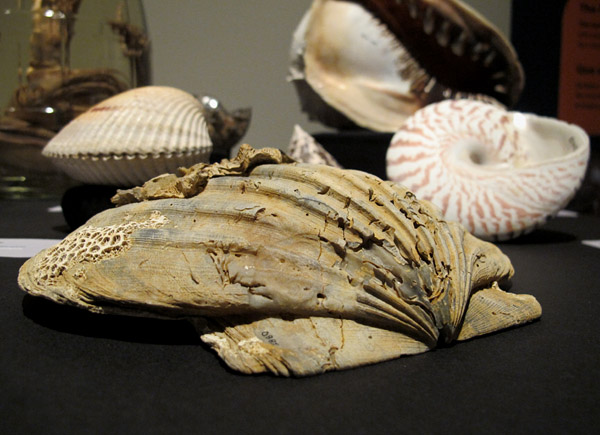 This fossil scallop Chesapecten jeffersonius, from Pliocene deposits in Virginia (about 5 million years old) is pierced by borings, and has been encrusted by corals and barnacles. 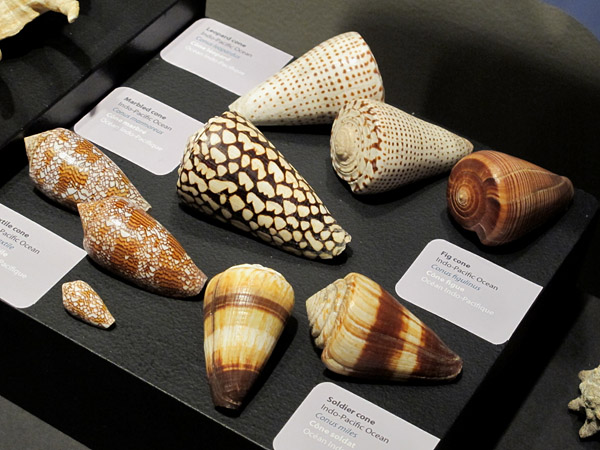 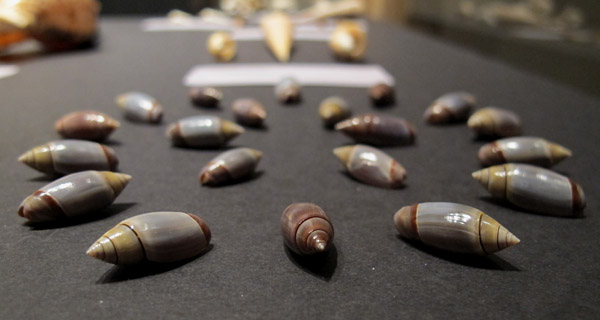