As the Museum’s botanist it is important for me to know not just how to identify plants but also how people traditionally and contemporarily use wild and weedy plants.  Although I am familiar with the edible fruit and nut plants of the prairies (and am quite enthusiastic about eating them!), I have been less inclined to try the edible wild greens.  The main reason behind my reluctance had to do with the fact that I wasn’t quite sure when and how to harvest and prepare said greens.  When I heard that an acquaintance of mine, Laura Reeves, offered workshops on how to prepare and eat wild edible plants (amusingly called “you can eat that?”), I determined that it would be beneficial for me to get some first-hand instruction. 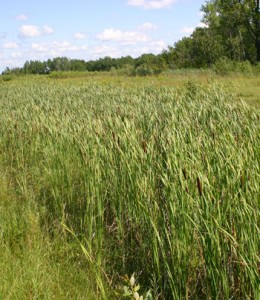 One of the plants with a wide variety of uses is cattail (Typha spp.).  First Nations traditionally ate cattails, which are also an important food source for animals like muskrats and geese.  Our morning began by removing and munching on a few cattail shoots, which were crunchy yet tender and reminiscent of cucumber.  We then proceeded to carefully dug up a few roots which we later washed to remove the starch; the wet starch was used later to make cattail pancakes.  Cattail pollen can also be used as “flour” and the green flower heads (which we couldn’t try because there weren’t any yet) can apparently be eaten like corn on the cob. 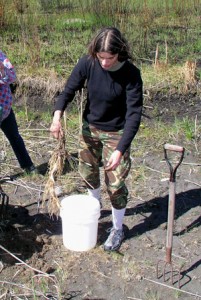 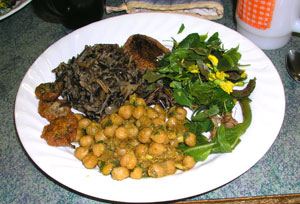 One of the most interesting things I discovered was how nutritious wild greens are compared to some domestic ones.  Blanched stinging nettle leaves (which can be eaten or used like cooked spinach) have a whopping 481 mg of calcium per 100 g compared to spinach with only 99 mg, Swiss chard with 57 mg, and iceberg lettuce with a paltry 18 mg!  Dandelion greens have 3.1 mg of iron per 100g but celery only 0.2 mg.  Clearly, regularly consuming wild greens can result in a much healthier diet. 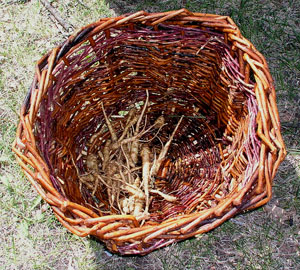 In an earlier blog I talked about the virtues of the common dandelion plant.  Although I mentioned in that blog that the roots are edible, I had never actually eaten them myself until I took this workshop.  Not only did I try (and really enjoy) a mug of dandelion root tea, but I baked the roasted dandelion root cake and fried the dandelion flower fritters that we ate for dessert.  Just the other day I harvested some of the dandelions in my own yard to make a nice herbal tea for the winter months (I’m going to add some cinnamon sticks and dried ginger to the mix as well).  So now I’m better prepared to answer questions about what wild plants taste like, and eager to incorporate some of what I’ve learned into Museum programs and exhibits.