Anniversary for a Museum Outlaw

Just outside my office on the 4th floor of the Museum is a big, hairy outlaw that can stare anybody down. It’s the mounted head of one of the original ‘outlaw buffalo’ of the Pablo/Allard herd of Plains Bison (Bison bison bison), the most significant of the private herds purchased by the Canadian government that helped to bring these magnificent animals back from the brink of extinction. 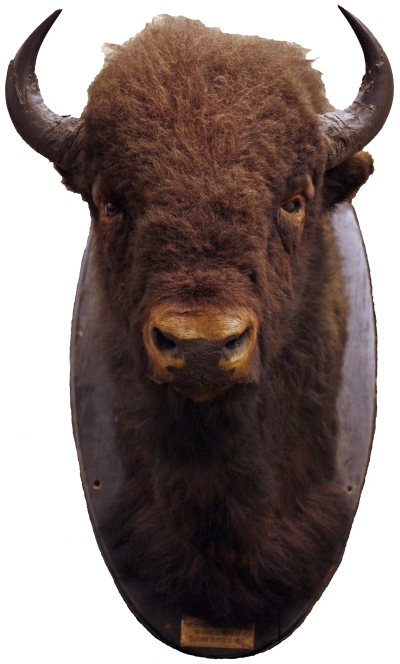 The 4th floor Museum 'outlaw', an original member of the Pablo/Allard bison herd, but one of several that refused to be driven into a train boxcar for shipping and was shot for its obstinance. Times have changed, we'd like to think.

By 1890, it is believed that there were no bison remaining in Canada. Several private herds started from wild stock during the 1870s were obtained by the Canada government beginning in 1897. The Pablo/Allard herd, the origin of the Museum ‘outlaw’, had its beginnings in about 1872 when Walking Coyote, a member of the Pend d’Oreille First Nation, captured a handful of animals south of the Alberta/Montana border. About a dozen offspring of this group were purchased by Pablo and Allard in 1883 and augmented with others purchased from other private owners some ten years later. When protected and left to their own devices, this bison herd became quite large.

The New York Times headline of January 22, 1911 reporting the culling of the 'outlaw' bison.

Michel Pablo rounded up his bison in Montana, loaded them onto boxcars and sent over 700 to Canada between 1907 and 1914. However, there were a few individuals that were too wild and managed to escape. In early 1911, in what was billed by the The New York Times in January that year as “the last big buffalo hunt in the history of the world,” Pablo hunted down and shot these ‘outlaw’ bison. The metal plaque on the Museum hallway head clearly identifies it as a member of Pablo’s ‘outlaw’ herd.

The metal plate identifying the Museum bison head as an 'outlaw buffalo' of the Pablo herd.

I mentioned the Museum bison head mount to a volunteer in Geology and Paleontology, Dr. Jim Burns, who has a fascination with Winnipeg history. He brought to my attention a photograph he had researched that showed 11 bison heads lined up on Main Street in 1911, apparently from that famous last hunt by Pablo (see Burns, J.A. 2010. Edward Darbey, taxidermy, and the last buffaloes. Manitoba History, 63:40-41). It seems that a number of these animals had made their way to a well-respected Winnipeg taxidermist, Edward Darbey. Born in St. Thomas, Ontario in 1872, Darbey came to Winnipeg at the age of 15. In 1898 he purchased the taxidermy shop on Main Street that is the backdrop to the bison skulls in the photo. By 1902, Darbey had been appointed as the “Official Taxidermist of the Manitoba Government,” an odd title by today’s standards, but one that made sense at the time when animal mounts were frequently used to decorate public buildings. 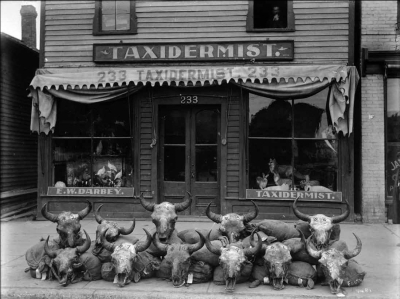 The Pablo bison were hunted in early 1911, the bison head and taxidermy shop photo was dated by Dr. Burns to around mid-1911, and there is record of a Winnipeg auction of bison head mounts and capes in late November, 1911. According to the plaque on our Museum mount, it became property of the City of Winnipeg in 1912, a reasonable date to link it with the somewhat gruesome Main Street display.

A close-up of the horns of one of the skulls from the 1911 Main Street photograph. Enhancing images like this provided a way to compare the horns of the undressed skulls with that of the Museum head mount to see if it could have been one of these animals.

Enlarged images of the undressed skulls in the old photo show distinctive patterns on the horns. I spent some time photographing the horns of the hallway ‘outlaw’ at similar angles to those of the 1911 photograph. From careful comparison, I am reasonably certain that there is a match for our 4th floor ‘outlaw’ – skull #5, second from the right in the back row of the Main Street photo (just right of the bottom of the door to the shop). The numbers on the skulls likely linked them with the appropriate skins for later mounting. 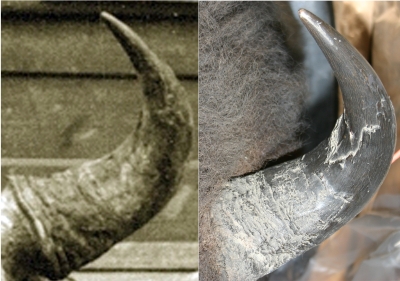 A comparison of the left horn of skull #5 from the 1911 photograph (left) with the left horn of the Museum 'outlaw' mount. Although difficult to discern on the low resolution images here, patterns on each of these horns and also the right horns are strikingly similar, suggesting a match.

So our big, hairy ‘outlaw’ bison mount is 100 years old this winter. This could be considered a depressing anniversary of the killing of some of the last ‘wild’ bison in North America. But for me, the old head commemorates the beginning of an incredible conservation story, the salvation of our provincial emblem and, just perhaps, an altered attitude of society towards the world around us.