Top 10 plants for the apocalypse: part 2

Hooray the apocalypse hasn’t happened yet! You’ll be able to learn what the final five most important plants are before the end of days. So without delay here’s number 6…

6. Wild Red Raspberry (Rubus idaeus)
Since exploding nuclear power plants are likely to be a problem in a post-apocalyptic world, it would be useful to know which edible plants are likely to do well under such conditions. Fortunately, the Museum has an entire collection of plants that have been bombarded with gamma rays from the old Whiteshell Nuclear Research Establishment. And the clear winner is: Wild Red Raspberry. This plant actually increased in abundance when other plants withered and died! 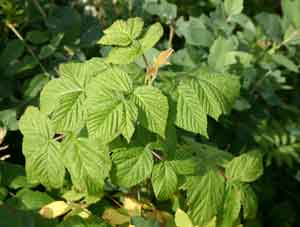 Identification: A short, spiny shrub with compound leaves in threes, and white, five petaled flowers which turn into delicious giant, slightly radioactive (but that’s the least of your worries) raspberries.

7. Wild Rice (Zizania spp.)
Wild rice has been cultivated by Indigenous people in Manitoba for at least 2000 years and is now found in many northern wetlands. Wild rice is much higher in protein, iron, and vitamins E and B6 than white rice. Plus it’s loaded with fibre so bowel irregularity is one less thing you’ll have to worry about.

You can learn more about wild rice in The Manitoba Museum’s Boreal Forest Gallery.

Identification: This tall, aquatic grass grows in shallow wetlands and river banks. It has separate male and female flowers that dangle from the stems.

8. Dandelion (Taraxacum officinale)
Yes, dandelions are “weeds” but during the apocalypse they’ll be everywhere and you can eat them, so they are your friends. The leaves are edible and very high in iron and vitamin A. The roots are good roasted and ground as a cocoa substitute or to make “coffee”. You can even eat the flowers! Plus as mentioned in a previous blog (http://www.manitobamuseum.ca/main/botany/2012/05/14/the-virtuous-dandelion/) they appear to have some anti-cancer properties. 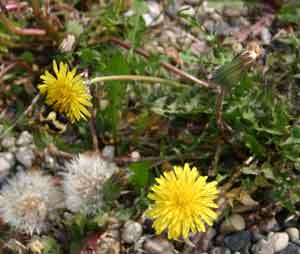 Bees love dandelion. You should too!

Identification: If you can’t identify a dandelion you’re completely hopeless. Let the zombies eat your brain!

9. Burdock (Arctium lappa)
This is another “weedy” plant with an annoying habit of possessing fruits that stick to your socks, pants, jackets and hair. But despite that, young burdock roots (called gobo in Asia where it originated) are edible and tasty when cooked. It grows well in disturbed, high nitrogen soils, which there will probably be a lot of. 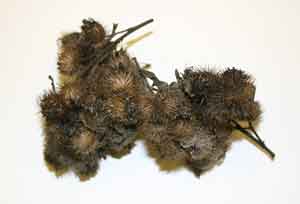 Burdock: the plant you love to hate. The burs will stick to you but you can dig it up and eat it (ah, sweet revenge).

10. Lamb’s quarters (Chenopodium album)
A popular and highly nutritious pot herb in northern Europe at one time, it has largely been supplanted by spinach and lettuce. However, while spinach and lettuce need to be coddled, Lamb’s Quarters is a tenacious survivor, often growing in the nastiest of habitats. It will be everywhere once farmer’s fields are abandoned and since you can eat it raw, you can forage while keeping your eyes peeled for intelligent robots trying to wipe humanity off the earth. 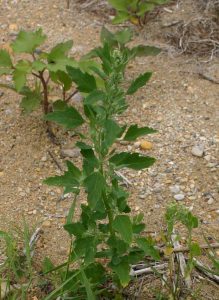 Lamb’s-quarter’s: its downright ugly but it can keep you alive.

There are many other plants that are edible, medicinal or useful for creating shelter or rope. Check out my previous blog “Eatin’ Weeds” for more information about edible plants: http://www.manitobamuseum.ca/main/botany/2012/06/01/eatin-weeds/.

(Caution: Some edible plants, mushrooms and berries can be easily confused with poisonous ones. Make sure you have correctly identified a plant before eating it. If you are truly serious about learning to identify and use wild plants, I highly recommend taking a survival training or edible plant course).