This September I was thrilled to be able to go on a tour of southern Manitoba with my colleagues here at the Museum.  Our mission: to learn more about the people, places and wildlife that calls this part of the province home to generate ideas for new gallery exhibits. 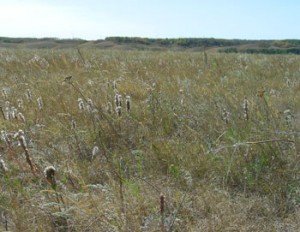 Fruiting Dotted Blazingstar in the prairie near Miniota. 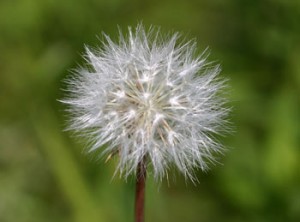 One of the most memorable things about our trip was neither a person, nor a place, nor an organism.  In fact, it wasn’t even an animate object-it was a force: the wind.  For anyone who has spent time on the treeless prairies you know what I mean when I say that the wind has an almost tangible physical presence.  Standing on the Assiniboine River valley slope on a lovely patch of mixed grass prairie near Minota, I almost felt that I would get blown away along with the Dotted Blazingstar and Hairy Golden Aster seeds.  On a windy day such as that, it was easy to understand why so many prairie plants evolved wind-dispersed seeds.  Plants in the Aster family are particularly adept at becoming windborne due to the extreme modification of their sepals. 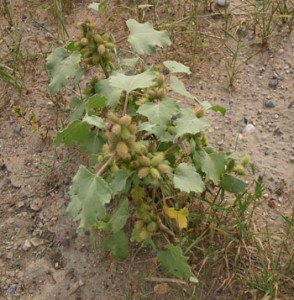 In most plants, the sepals are tiny leaves that simply dry up as the fruit develops.  But plants in the Aster family have sepals that are highly modified into special structures called pappi.  In some species, like beggarticks, the pappus consists of spines that help the fruits catch onto the fur of passing animals; cocklebur fruits have hooked prickles to achieve the same goal.  In most of the prairie Asters however, the pappus is a ring or puff of feathery hairs that act like a parachute.  Under very windy conditions, Aster fruits can travel many kilometres away from the parent plant.  This adaptation enables plants with wind dispersed fruits to more readily colonize bare areas of soil and maintain greater genetic variability.

Most of us have picked a dandelion and blown the fruits away but we rarely examine them closely or truly appreciate their beauty and functionality.  Next time you see a dandelion look a little closer before you blow and admire one of the innovations of nature. 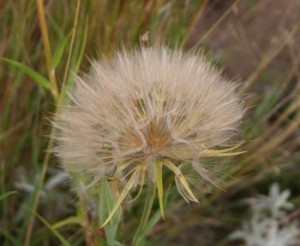 Goat's beard has the largest wind-dispersed seeds in Manitoba.