Confessions of a Genuine Science Geek 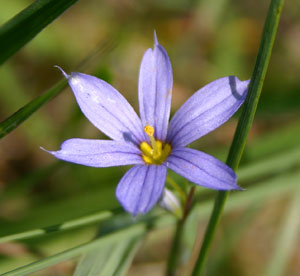 I love staring at the delicate Blue-eyed grass flowers!

For the last several weeks I have been recording the pollinators of wild flowers in Birds Hill Provincial Park.  One rather windy and uneventful day I was able to reflect on my chosen profession and was forced to conclude that I am a science geek.   I remembered an old episode of the Simpsons where Bart discovers a comet.  While searching the heavens with Bart, Principal Seymour Skinner says, “There’s nothing more exciting than science!  You get all the fun of sitting still, being quiet, writing down numbers, paying attention-science has it all!”  That pretty much describes what I’ve been doing for the last seven years: sitting quietly, waiting for an insect to land on a flower, and writing down the number of flowers she/he visits.  In the winter I identify plants and insects, study the data I collected, make graphs, run statistical analyses and write scientific papers.  The funny part is that I really do find it exciting.  It’s fun to find out if the patterns you surmised while in the field were real or indistinguishable from nature’s background noise.  Plus, there’s nothing more thrilling than correctly identifying a mysterious species of sedge!  Hence my revelation and this confession. 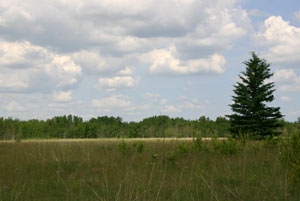 I know that to some (probably all those extroverted people out there) my job sounds dull and tedious (a bit like watching paint dry, perhaps).  But for an introvert like me, who is energized by solitude, it’s actually the perfect job.  Being in a crowded, noisy environment with lots of people around would just drain me. 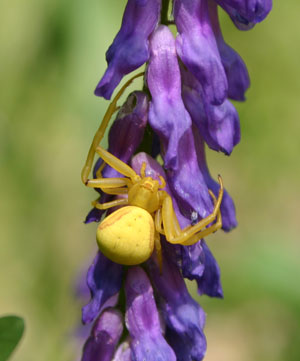 One of the facinating creatures I share my work space with: a crab spider.

Perhaps I’m being a little too self depracating though.  Having a job where you’re constantly stuck indoors on beautiful summer days isn’t that great either.  I get to watch all sorts of wildlife while I do my work, smell fragrant wildflowers and feel the wind on my face.  Plus I don’t need to take any vitamin D tablets (skin cancer’s a possibility though).  The fact of the matter is some people pay money to do what I get paid to do: observing and photographing wildlife.  I can’t imagine too many people paying money to be a lawyer or a stockbroker for a day.

I also take solace in the fact that the specimens and data I collect will probably be studied long after I’m dead.  Not everyone can say that about their life’s work.  So even though I am a science geek, I don’t mind at all.