Today I got to study a plant specimen that had been collected 100 years before I was born in 1872 by one of the most famous Canadian botanists, Dr. John Macoun.  Dr. Macoun accompanied the engineer Sanford Fleming to look for a railroad route through the Canadian west and determine the area’s agricultural potential.  Macoun collected thousands of plant and animal specimens on his journeys, which involved travelling either by horse or canoe.  He collected over 100,000 plants in his lifetime including over 1,000 that were new to science.  In total 48 new species were named after him, including Macoun’s buttercup (Ranunuculus macounii). 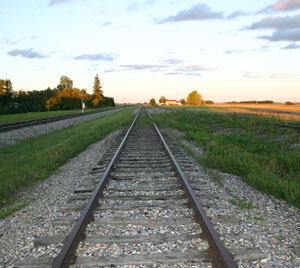 Macoun and Fleming were trying to determine the route for the western railroad.

Touching Macoun’s handwritten label made me wonder what western Canada looked like back then.  Just acres and acres of grasses and fragrant wildflowers, and thousands of birds, antelope and deer I imagine.  Or maybe it just felt big and empty and utterly overwhelming. 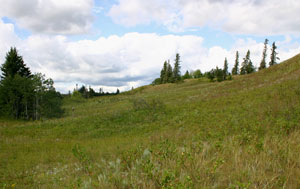 Macoun travelled along the Carlton trail through the Brandon Sand Hills.

I can’t imagine the difficulties he encountered trying to do his field work.  Lugging everything you would need for months on pack animals or wagons must have been difficult to manage.  Being a scientist, he also had to protect his plant press full of specimens from insects and moisture, water being a botanists’ greatest enemy.  Many a brave explorer had his precious specimens go completely moldy.  The botanist David Douglas ended up eating part of his plant collection so he wouldn’t starve to death!  The field work that I do is posh in comparison; I drive on paved or gravel roads and usually stay in hotels or cabins!  Furthermore I don’t have a whole chapter at the end of my reports recounting the loss of life that occurred during the field work.  Sanford Fleming’s “Report of progress on the explorations and surveys up to January 1874” contains such a chapter recounting the loss of 19 men during his survey: seven died in a forest fire, four drowned while canoeing the Ottawa River and eight died in a steamer wreck on a shoal! 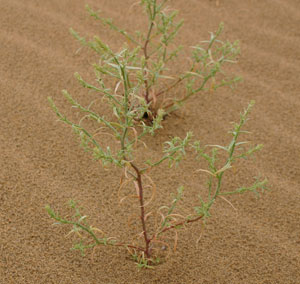 Dr. Macoun collected a specimen of Hairy Bugseed in 1872 that I have been studying.

I also mused about the end result of his journeys.  Macoun’s report on the fertility of the prairies convinced Canada to send immigrant farmers to this land.  How would he have felt knowing that his report paved the way for the almost complete destruction of the grassland that he had wandered on?  That plants and animals that had once numbered in the billions would be reduced to mere handfuls less than a century after his arrival?  Perhaps it would have made him happy, knowing that the land was settled with European farmers and ranchers.  But I suspect that that happiness would be mingled with at least some regret that no one would ever again experience the wild west as he had.