Even though I’ve been in the job for 9 months there are still parts of the collection that I’m not as comfortable with, largely because I’ve never worked in that geographic region.  That’s why I was very excited to receive a request from Jennifer Kramer, Pacific Northwest Curator at the Museum of Anthropology (MOA) in Vancouver to come and look at any Northwest Coast artefacts during her visit to Winnipeg.  What a perfect opportunity to learn about a part of the collection that I know very little about!

Jennifer has been working closely with the Nuxalk (pronounced new-haulk) community, and quite closely with Clyde Tallio, a Nuxalk culture historian and visiting scholar at UBC.  It turns out there is a pretty substantial Nuxalk collection within the HBC collection, and Jennifer was able to tell me more about it while documenting the items, and Clyde provided us with the Nuxalk names and additional information.

One of these items is currently on display in the HBC Gallery, it is listed as a ‘rain hat’ from Bella Coola.  Unfortunately the cases in this gallery are difficult to open, so we relied on the database information and anything we could find in the donor file. 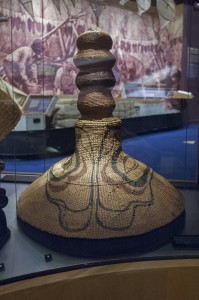 Jennifer informed me that this ceremonial hat, likely made from woven spruce root or cedar, would have been worn by someone of great importance.  Each of the ball-like additions on the top represent individual potlatch ceremonies, thus this hat was part of four potlatch ceremonies.

The collector of the hat, Clifford Kopas, had sent photos to the Hudson’s Bay Company from Bella Coola and some of these were printed in the June 1948 edition of The Beaver. 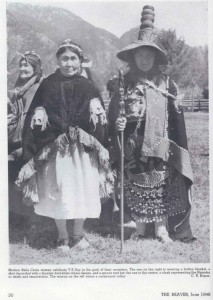 Scan from The Beaver Magazine

Clifford Wilson, Curator of the HBC Historical Exhibition, wrote to Cliff Kopas to ask about some of the items one of the women was wearing in the photo, in particular “an excellent spruce root hat, which I suspect should be worn by a man rather than a woman” (excerpt from his letter, found in our donor files from the HBC Archives).  He went on “I wonder if she still has these items, and whether she would be willing to part with them…our Pacific Coast Indian material is not as good as it should be and we ought to get hold of items like this when they are available”.

One month later the hat arrives and is catalogued as part of the HBC collection.

Jennifer and I found the June 1948 edition of The Beaver and I scanned the photo for her to take back and show Clyde.  He was able to tell us the names of both women in the photo: Annie Johnson on the left, and Helen (née Houstie) Schooner.  Helen was a very high ranking Heiltsuk woman who married Samson Schooner and Clyde believes the hat did in fact belong to her (rather than Clifford Wilson’s suggestion that it was a male chief’s hat) since her marriage had been validated and potlatched four times (and remember that this hat has four rings!).

So not only did I make some great connections with Northwest Coast scholars, but through this we were able to connect an artefact within the HBC collection to an actual person!