Plants that Want to Kill us

OK I’m exaggerating, plants don’t really want to kill us-they just don’t want us (or any other animal) to eat them. So plants have evolved ways to protect themselves-thorns, spines and prickles come to mind. But instead of physical armaments, many plants use chemical warfare to keep us pesky mammals away. 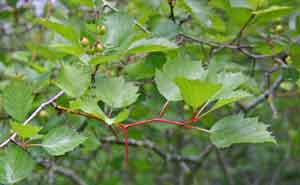 The native stinging nettle (Urtica dioica) plant possesses nasty little hairs on its leaves with a bulb of poison at the base. When an animal brushes up against the leaves, the hairs inject the poison, causing an itchy rash and discouraging the animal from eating it. Some people still eat stinging nettle though (I’ve eaten it myself in fact), because it is very nutritious: high in protein, iron, and vitamins A and C. But humans have weapons that other animals don’t: rubber gloves and fire! Stinging nettle MUST be cooked to neutralize the toxin (I’d hate to think of what would happen if you tried to eat it raw). Poison ivy (Toxicodendron radicans), another native plant, also produces a rash-inducing poison but it is on the surface of the leaf. 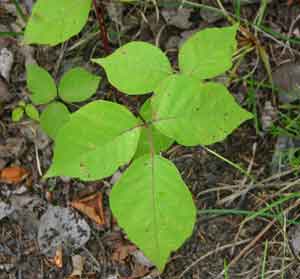 Remember the poison ivy (Toxicodendron rydbergii) identification rhyme to avoid this plant: “leaves of three let it be”.

Many plant chemicals will not affect an animal unless they are ingested. Milkweeds (Asclepias spp.) contain cardiac glycosides that make them toxic to most animals. But one ingenious creature has found a way around that: Monarch (Danaus plexippus) caterpillars. Monarchs evolved a method to store those toxins in their bodies, making them poisonous to predators. 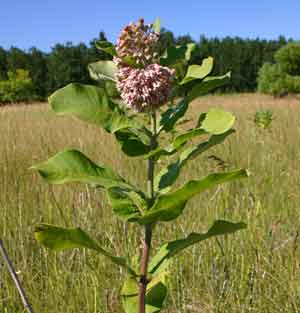 Showy milkweed (Asclepias speciosa): yucky to most, yummy to monarchs.

Even some of our common grocery store foods are poisonous. Take tapioca for instance. Many people find tapioca bland and boring. In reality the cassava plant that tapioca is made from, is actually pretty exciting. Cassava (Manihot esculenta) is the botanical equivalent of Japanese fugu, a poisonous fish that has to be prepared by expert sushi chefs to render it non-lethal. Cassava roots contain large quantities of cyanide-enough to make a human seriously ill or even kill you if you try to eat it raw (raw foodist-you have been warned). Cassava needs to be soaked, fermented, dried and/or cooked to get rid of the cyanide and make it edible. 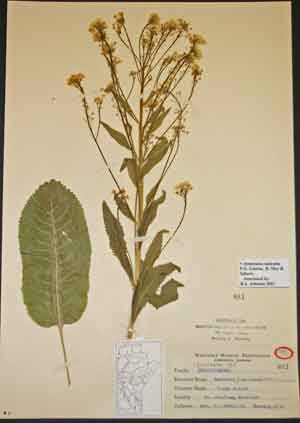 An herbarium specimen of the popular condiment horseradish (Armoracia rusticana) from The Manitoba Museum (TMM 881).

Ironically, some plants have become desirable to humans because of their poisonous nature. I remember the first time I ate wasabi-coated (Wasabia japonica) peas. The first few were fairly mild and tasty. Then I hit the wasabi motherlode-the pain in my sinus cavities was excruciating. But it didn’t last long; soon after I felt a pleasant, relaxing sensation which I learned later was my body releasing endorphins to counteract the pain. A similar effect (although not quite as painful) happens when you eat horseradish (Armoracia rusticana) or black mustard (Brassica niger) because these plants contain the same type of chemical, namely mustard oil glycosides. Hot peppers (Capsicum spp.), such as jalapenos, are also painful to eat because they contain the alkaloid capsaicin. Fortunately for these edible plants, our desire for them has helped them spread throughout the world, to regions they never would have gotten to without humanity’s help.