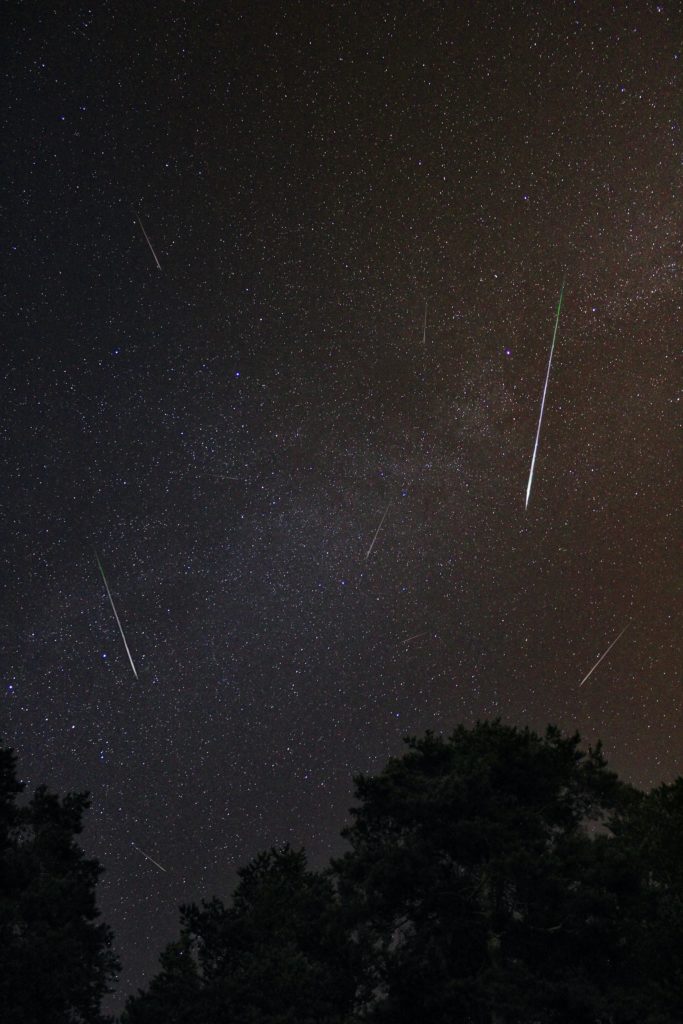 August brings with it hot summer days, earlier sunsets, and the annual Perseid meteor shower. Here’s how you can get the best view of the shooting stars this season.

TL;DR: Best views  for Manitobans will occur between 3 a.m. and 5 a.m. on the morning of Saturday, August 13th, or the mornings immediately before or after that date. Go somewhere where you can see the stars, face east, and watch the sky. Don’t look at your phone or you will ruin the night vision you need to see them. If it’s cloudy, the morning before or after will still be pretty good. Expect to see a meteor every few minutes. If you’re lucky you might see more.

The Perseid meteor shower is the best-known, if not the best, meteor shower of the year, and August is a reasonable month to spend some time under the stars. On good years you can expect a meteor every minute or so. 2022 isn’t a “good year”, though, because the nearly-Full Moon will light up the sky and make it hard to see the fainter meteors. But it’s still worth getting out for, and the sky has a lot of other sights to see while you’re under the stars.

So, some basics first: a meteor is a glowing trail of light that shoots across the sky and disappears in the blink of an eye. Some are faint, while others can be so bright they light up the ground like the flash from a camera. They are caused by tiny pieces of dust floating out in space. When the dust hits the Earth, Earth’s upper atmosphere slows it down very quickly. At heights of 50km or more,  all of that speed energy gets turned into heat energy, and the piece of dust vaporizes. The excess heat causes the air around the dust to glow, and we see that glow from the ground as a meteor. (Some people call them “falling stars” or “shooting stars”, but they’re not related to stars at all.)

On any given night of the year, if you watched the sky for an hour continuously you’d see about half a dozen meteors on average. (They’re much more common than people think!)  But on certina nights of the year, the Earth crashes through a cloud of dust – like an interplanetary dust bunny – and we see more meteors than usual. That’s a meteor shower.

These dust bunnies are left behind by comets that orbit the sun. A comet is a small body of ice and dust only a few kilometers across. There are millions of them, but most stay out at the fringes of the solar system and are invisible. When one gets nudged in towards the sun, it can warm up and melt, and the comet forms its characteristic tail. After the comet loops around the Sun it re-freezes, becoming invisible once again until its next return. The orbital path of the comet becomes very dusty from repeated passages of the comet. If the Earth’s orbiot happens to intersect the comet’s orbit, we will hit that dusty patch at the same time every year.

Meteor activity from the Perseids actually begins around the end of July, but because the edges of the comet’s path aren’t as dusty as the middle, we don’t see very many Perseids until a few days before the peak. This year the peak occurs on the 12th of August, but there will be decent activity from the 10th through the 14th or so.

There’s a big, “BUT” on when the peak activity is for your location, though. Just because the earth is in the dustiest part of the comet’s path doesn’t mean you can see meteors then – it might be daytime for you, or you might be on the far side of the earth from the direction the earth is moving. So, the best time to watch is between about 3 a.m.and 5 a.m. on the mornings closest to the peak. Due to a variety of factors we won’t get into here, you’ll almost always see the most meteors from a single location in the pre-dawn hours.

How to See the Perseids

First, watch the weather. Meteors happen above the clouds, so if it’s cloudy we can’t see them. You want a clear forecast in the critical 3 a.m. to 5 a.m. period.

Second, get out of the city. Street lights make it hard to see stars, and this is even more true for meteors which flash by in a second or two. You don’t have to go far, but even 15 minutes outside of the city in an area without any big streetlights will quadruple your meteor count at least.

Third, get comfy and be patient. Meteors can occur anywhere in the sky, so you want to watch as much sky as possible. A reclining lawn chair or blanket lets you fill your view with sky instead of ground. And watch the sky continuously. By the time someone says, “there’s one!” you have already missed it. Keep your eyes on the sky. Don’t use binoculars or a telescope, since those only show a part of the sky at once – you want the wide field of view provided by the factory-installed optical detectors you came with.

In the age of mobile devices, this advice is even more critical. It takes a good five minutes for your eyes to go from “daytime” mode to “night vision” mode, but it only takes a second of bright light to ruin your night vision and require another five minutes to switch back. every one second you look at your screen means you’ll miss at least 5 minutes’ worth of meteors.

You can take pictures of the sky with any camera, even the one in your mobile device – if you know how. The typical camera is designed for family pictures at the beach, not stars, so find out how to make your camera work well. Turn your flash off (it won’t help, and will ruin the night vision of everyone else around you), and set the camera for “night mode” or long exposure. There are also dedicated apps for taking star pictures you can find on your device’s app store. Point-and-shoot cameras often let you set the camera to “bulb” (manual) or take exposures up to 30 seconds. A DSLR or mirrorless camera will take amazing star pictures, but takes practice to use.

Point the camera at an area of sky, set it on the ground or use a tripod, and press the button. You’ll get a picture of the stars at least, and if you’re lucky, a meteor will happen in that part of the sky while you’re taking the picture. If not… just try again. And again. For every meteor image you see online, that photographer has hundreds of no-meteor images that still show the constellations, Milky Way, satellites, or Northern Lights. Still cool, even without the meteor.