I Tawt I Taw a Puddy Tat!

Seeing cats in Manitoba doesn’t take a whole lot of effort. I have one that lives in my house (and only in my house), and too many that wander around the neighbourhood doing a number on birds and getting hit by cars. And there are always cartoon cats on TV or the web like Sylvester (of Bugs Bunny fame) as he tries to capture and eat Tweety – that yellow bird’s frequent (and distorted)exclamation being the source of this blog’s title. But seeing the province’s native wild cats is quite a bit more challenging than seeing these domestic versions. 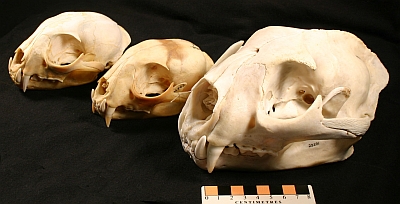 Skulls of the three species of wild cats in Manitoba from the Museum collection. From left to right: lynx (from Nopiming Prov. Park, MM2057), bobcat (from Whiteshell Prov. Park, MM21400), cougar (from Erickson near Riding Mountain Nat. Park, MM23281). Scale is marked in centimetres.

We have three wild cat species quietly slinking through our woods and fields. Two are quite rare in Manitoba and all are shy, so a special effort and/or a little luck are needed to see one. The most common is the lynx (Lynx canadensis), a Canadian shield and boreal cat, usually around 10kg with long ear tufts, a stub tail with a black tip, and a luxurious fur that has made it a staple of the trapline for centuries. Despite its relative abundance, it is infrequently seen, even by those that spend a good deal of time outdoors. The bobcat (Lynx rufus) is of similar form, but with shorter ear tufts and a striped stub tail. It is about the same size or a little larger than the lynx, but found only in the southern tenth of the province and is considered uncommon. 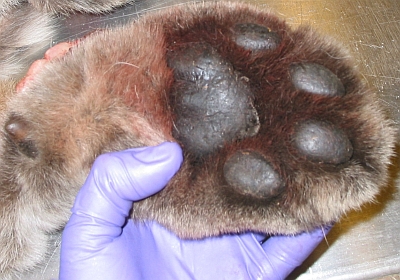 An impressive paw of the Erickson cougar, a 53kg male, held in a gloved hand during specimen preparation. Imagine the size of a paw on a big male over 100kg!

The most romanticized member of the cat family in Manitoba is the cougar (Puma concolor). Big males of this magnificent cat can be over 100kg, but most are smaller, and females reach about 60kg. Its status in the province was a bit of a mystery, with only vague historical records until more reliable reports began in the 1940s. But it was not until 1973 that an actual specimen was available, a small male (43kg) shot while near livestock in Stead, about 90km northwest of Winnipeg. Two others, one shot and another accidentally snared, were taken in 2004 around Riding Mountain National Park (near Grandview and Erickson) . All three of these specimens are in the Museum collection. There have been several well-documented and publicized sightings since then in Plum Coulee, Duck Mountain, Lac du Bonnet and Morden (among others). 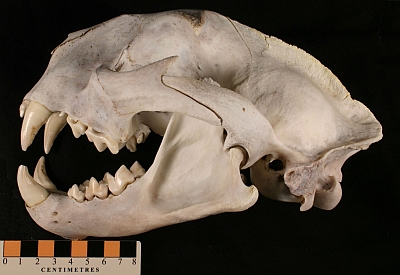 Side view of the Turtle Mountain cougar skull recently added to the Museum collection. The scale bar is in centimetres.

Just a few months ago, the Museum received a fourth cougar specimen that had been accidently snared (the snare was legally set for coyotes) in the Turtle Mountain area in January of this year. This is by far the biggest specimen we have, a male weighing in at about 66kg. Although it is unfortunate that these animals have been killed, it is fortunate that their remains are deposited at the Museum. Here, they can be made available to the scientific community so that we can learn more about cougars in Manitoba. With so few sightings, actual specimens will help us determine where our cougars are coming from. Using DNA and genetic techniques, researchers are examining whether our cougars are resident or if they are wanderers from established populations in the Dakotas. The age and health of the specimens can also be detemined. The cougar specimens will continue to provide information and educational opportunities for as long as our collections exist. 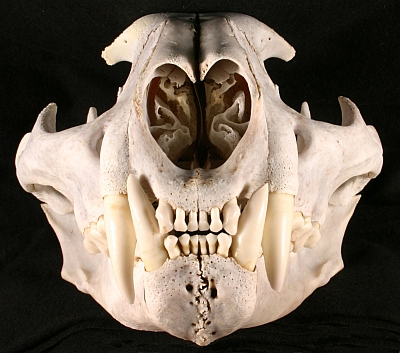 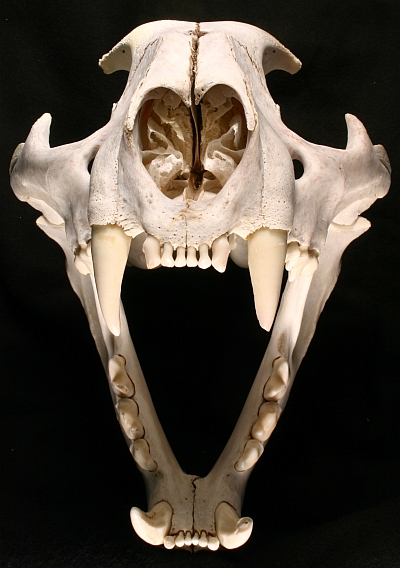 Front views of the Turtle Mountain cougar skull with mouth closed and mouth open. Intimidating any way you look at it!

Sightings of cougars seem to be on the rise. And there are those two other smaller Manitoba wild cats, the lynx and the bobcat, that are also superb animals. So if we keep our eyes open and have a little luck, maybe more of us will soon be able to quote that cartoon canary, Tweety: “I did! I did! I did taw a puddy tat!” And those are some impressive “puddy tats.”