A valuable feather in the Museum’s “cap”

As curators of some sizeable collections (>100,000 in Zoology alone), we are frequently asked what the most valuable specimen or most important one among them might be. Certainly, the collection contains several items that are “one-ofs”, or are the biggest, or most colourful, or even worth a good deal of money in the marketplace. But value, like beauty, is in the eye of the beholder.

Who is to say if a specimen of Passenger Pigeon (Ectopistes migratorius) (MM 3.6-887), a species extinct since 1914, is more valuable than one of the tiny Lake Winnipeg snail (Physella winnipegensis) (MM 2.4-6514), a disputed species found only in Manitoba?

We recently received a request for a few feathers off of a single specimen of Ivory Gull (Pagophila eburnea) collected north of The Pas in 1926, the only specimen we have of this species. The Ivory Gull is a High Arctic breeder that has made an appearance in Manitoba only about a dozen times in the last 100 years. The species is listed as Endangered in Canada and its populations are declining. A research group is examining levels of mercury and stable isotopes of carbon and nitrogen in feathers to investigate the possible role of heavy metal contamination and changes in foraging behaviour in Ivory Gull decline. The Manitoba Museum specimen is one of only about 150 specimens from Canada in all the museums of North America, and its age makes it particularly valuable for reconstructing historic levels of contamination and isotopes. Who could have predicted the value of this Museum specimen for conservation of the species when it was collected those many years ago?

Our Ivory Gull specimen (Pagophila eburnea) (MM 1.2-941) from north of The Pas, collected in 1926. Feathers from this specimen can help determine historical levels of pollutants and ratios of stable isotopes can determine feeding ecology.

By sharing information on Museum rarities with researchers who can pool data from the few specimens available in collections from around the world, we learn more about the biology of the organism, making the specimen more ‘valuable’ in terms of information and helping conservation efforts. The Museum ends up with another story to tell about its collection and about the animals themselves. Science, the Museum, and, most importantly, the animal will all win from this exchange.

Nature generally can be understood through patterns. Unique observations, like a rare gull found north of The Pas in 1926, are curiosities, but can’t contribute very much to the bigger picture as an isolated event. Even the proverbial apple clunking onto Newton’s head, though important as a unique event, only becomes truly valuable when its act of falling towards Earth can be generalized to explain why other things also fall. 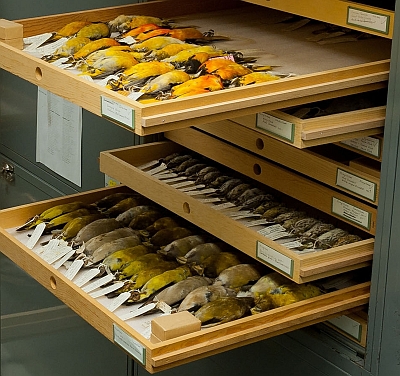 The Museum collections often include several specimens of the same species to include examples of males, females, and juveniles during different times of the year, different locations, and different decades.

This helps to explain why the Museum has, when possible, more than one example of a species, and continues to grow collections through active collecting. Just as a single letter is more as a part of a word, or a word is more meaningful when put into a sentence, a specimen becomes more in the context of a collection. A particular specimen does have value in and of itself as a record of occurrence in a single place at a single moment (called a voucher), or sometimes even has monetary value. But several specimens from different places collected at different times provide a more complete story of species variability, distribution, biology, and, as in the case of Ivory Gull mercury levels, how these might have changed over time and space. Each individual provides a data point, and an important one, but the real value comes from the collection as a whole. And a new specimen added to the collection today, while not necessarily individually significant right now, might be so 100 years from now, just as the Ivory Gull specimen collected in 1926 is valuable today. 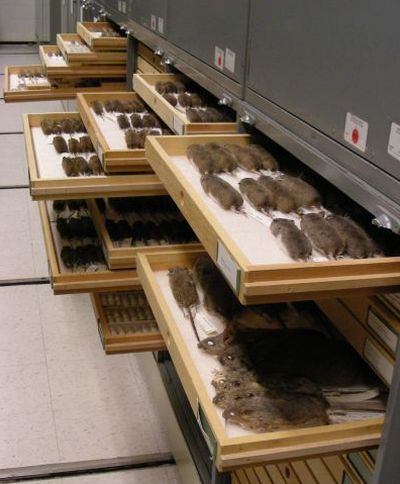 These drawers of dozens of the same species of mouse are waiting patiently to tell their story of change over time; change in distribution, ecology, and other aspects of biology.

Richard Fortey (a paleontologist at The Natural History Museum, London) suggested that natural history museums are the archives of the Earth, an apt metaphor. Through their collections, museums document individual “events” as specimens, which together tell the story of how our natural world changes over time. The Manitoba Museum plays this critical role as natural history archive for the province. Specimens old and new are together a feather in our collective cap.