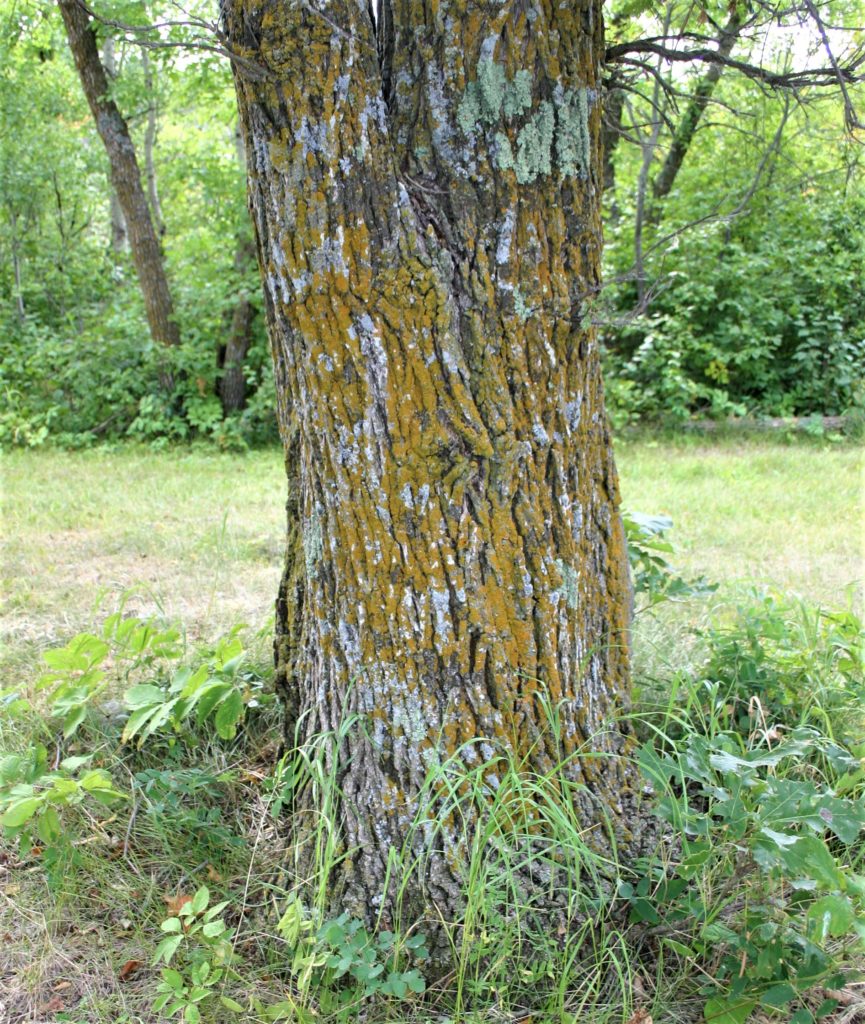 If you’re an observant person, you may have noticed colourful things growing on Manitoba’s trees and rocks. Although some of these organisms are mosses (especially near the base), they are more likely to be lichens.  Bright orange Firedot Lichens (Caloplaca spp.) are common on Manitoba’s elm and oak trees.

Lichens are symbiotic organisms; they consist of a fungus (called a mycobiont) and an alga (called a photobiont). In some lichens there is also a cyanobacteria or a second or third species of algae (there are still a lot of unknowns when it comes to lichens). The common dog lichens (Peltigera spp.) typically have cyanobacteria in them, often from the genus Nostoc, a free-living species that looks like bits of crumbled tar when dry. The algae and cyanobacteria, if present, photosynthesize, producing sugar, which they share with the fungus. The fungus absorbs water and dissolved minerals directly from the environment (so it doesn’t need any roots), and shares it with the other species. Cyanobacteria can also take nitrogen gas from the air, turn it into a chemical form, and share it with the other partners. 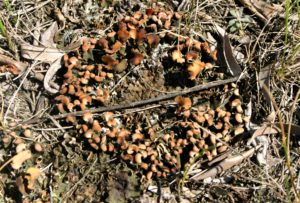 Lichens grow in the patterns they do to maximize the amount of light they intercept; some species look like tree branches (called fruticose = branch-like lichens) for this reason. Other lichens are leaf-like (i.e. foliose), or crusty (i.e. crustose). Some lichens living in really harsh environments (like the Antarctic) are cryptoendoliths, meaning that they live inside the rock, penetrating the tiny spaces in between rock crystals. 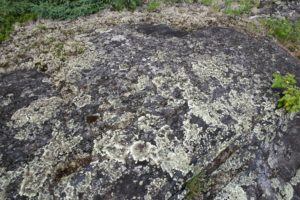 In the prairies, lichens often grow in hot, sunny habitats, such as sandy soils, and on glacially-deposited rocks. They are also common on fenceposts and abandoned human artifacts, like collapsing homesteads and rusty ploughs. In forested areas, lichens are common, growing on trees, as well as mossy, forest floors. In the Canadian Shield, rock outcrops are often almost completely covered by lichens. In urban areas, lichens are sometimes found on old buildings, like the legislature. Different species grow on these different substrates (hardwood vs. softwood, sandy soil vs. clayey soil, granite vs. limestone) so make sure you record this information when trying to identify lichens. 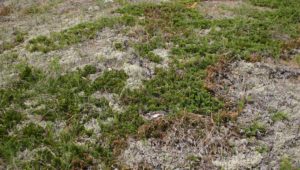 Since they don’t need soil, lichens are some of the first organisms that begin growing after large disasters wipe out all vegetation in an area. They are often the first to arrive after hot fires or mining activity (such as sand, gravel and coal mining). Acids in the lichens break down rocks, contributing to soil formation. Lichens can completely desiccate when it is dry, growing again when it rains. Due to this periodic desiccation, lichens tend to grow very slowly, reaching extremely old ages. Some lichens can be aged the way trees are: by counting their growth rings. Some lichens (i.e. yellow-green map lichens) have been dated as being over 8,600 years old. 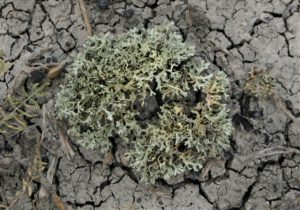 Lichens are often the first organisms to start growing on disturbed soils.

Lichens reproduce themselves vegetatively, by breaking off into tiny pieces, and both sexually and asexually. Sexual fruiting bodies of various kinds (e.g. pycnidia, asci, apothecia etc.) are produced by the fungus. They release small, single-celled spores which germinate into new, partner-less fungi. These tiny fungi must find free-living alga to become lichens again. To allow both the fungus and the algae to disperse together, lichens also produce asexual propagules, usually at the branch tips, of various kinds (e.g. soredia, isidia, pycnidia etc.). These tiny clusters of cells, once dispersed, often by wind, will grow into a new lichen.

A few of the most common lichens in southern Manitoba are described below:

Pixie-cup lichens were so named because ancient Europeans thought that fairies or
pixies would use these structures as goblets to drink from. The “cups” are actually the reproductive structures of the lichen. This species found in all provinces, occurring on forest floors and sometimes tree bark. 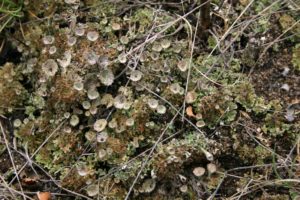 As the name implies, this species is eaten by “reindeer”, called caribou here in Canada. Reindeer lichen are common in the arctic and boreal forest, but are also found farther south. In Manitoba’s prairies, it is most common on sandy soils. This fruticose lichen grows sexual and asexual structures at the very tips of the branches. Vegetative reproduction via fragmentation is also a common method of spreading, as the branches are fragile when dry. 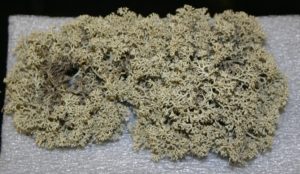 Like the reindeer lichen, this species is found on sandy or thin soils in the prairies. However, it is a prairie specialist, not found farther north. You can find it on the sand dunes near Portage la Prairie, Oak Lake and Carberry. It is a fruticose lichen with some flattish portions and upturned, spiny margins. This species reproduces mainly vegetatively via fragmentation or the production of asexual propagules. Sexual reproduction is infrequent, with the spore-producing structures (i.e. apothecia) located at the tips. 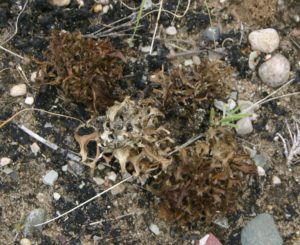 Species in this genus grow on alkaline substrates, such as calcareous, siliceous and basaltic rocks, bones, bark and soil. They often grow on substrates that are high in calcium, nitrogen and phosphorus, such as places where birds like to stand and poop. For the aforementioned reason, they have been called ornithocoprophiles (i.e. bird-poop lovers). They are foliose lichens that grow in a rosette. They mainly produce asexual soredia on their upper surfaces. 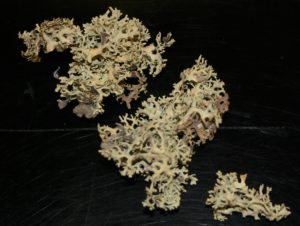 More lichen information can be found in this nifty little booklet available on-line (https://www.muskokawatershed.org/wp-content/uploads/LichenID.pdf) but if you are really serious about lichens I recommend investing in Irwin Brodo’s Lichens of North America.