We Are All Treaty People 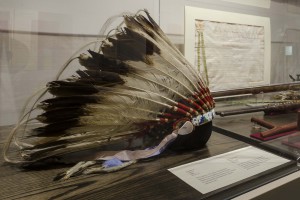 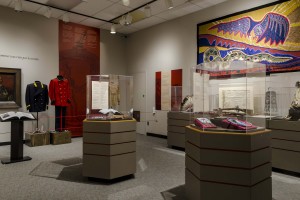 The Museum We Are All Treaty People, a new exhibit on the history of Treaties in Manitoba, in the Museum’s Discovery Room on May 1. A collaboration with the Treaty Relations Commission of Manitoba and its Commissioner James Wilson, this is the first time visitors will be able to see almost every Manitoba Treaty medal including the medal given by Lord Selkirk to Chief Peguis in 1812 and original medals for Treaties No. 1, 2, 3, 5, and 6.Treaty 4 medals from Manitoba are rare but we will display the original 1875 parchment commission for Treaty No. 4 Commissioner, William Christie.

In every case, the Treaty medals or documents signifying Royal contractual obligations have been matched with pipes and pipe bags signifying the First Nations’ commitment to the Treaty as a sacred undertaking meant to last forever. “It is unusual for a museum to display sacred artefacts like these pipes and pipe bags, but without them we would have failed to represent First Nations agency and understandings,” says Maureen Matthews, Curator of Native Ethnology at The Manitoba Museum and responsible for this exhibit. “We have collaborated with Treaty Relations Commission, consulted with the AMC Elders Council and feasted the artefacts in advance of this exhibit. The beaded pipe bags also bring women into the story of Treaties and we have built on that theme with two art works by Pat Ningewance Nadeau which illustrate First Nations’ perspectives on power relations and the ordering of the world.”

We Are All Treaty People runs from May 1 to October 26, 2014. The exhibit is located in the Museum’s Discovery Room, Sponsored by TD Canada. Regular Museum Gallery admission rates apply; free for Museum members.