Some Museums buy their treasures — We make ours 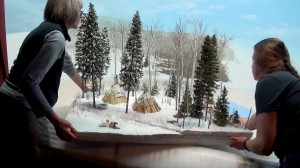 The Manitoba Museum unveil its new Aschkibokahn diorama in the Parklands/ Mixed Woods Gallery on January 16th. This mini-diorama, an incredible blend of art and research, features an ancient Native camp site located on Lake Winnipegosis in Western Manitoba, and follows an Anishnaabe family of the late Woodland period about 800 years ago as they move across the land from winter to summer. This diorama was created by artist Betsy Thorsteinson and her team at the Museum. The Aschkibokahn mini-diorama is made possible with funds through Parklands/Mixed Woods capital project as well as annual operating funds.

“The diorama highlights the strategic movement of First Nation people across the landscape, based on traditional knowledge and oral histories,” says Kevin Brownlee, Curator of Archaeology at The Manitoba Museum. “It was designed to maximize the resources that are there, you want to be in groves of maple trees in the early spring to harvest the sap and you want to be near to where pickerel are spawning in the late spring to harvest large quantities of fish. It wasn’t aimless. It was based on generations of knowledge.” 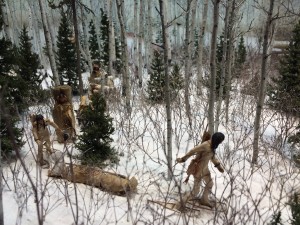 Mobility was essential to survival according to First Nation oral histories. Moving camps seasonally allowed the land to rest and renew, and encouraged people to harvest resources in plentiful areas. During the mid-winter, small family groups established camps in sheltered areas, like the Duck Mountains, for protection against the cold winds. In the early spring, people camped next to large groves of maple trees in order to harvest their sap. Fish spawning seasons drew large camps of people together at the mouths of major rivers and streams.