Arriving just in time for ULTIMATE DINOSAURS, you won’t want to miss our new Planetarium Show, Dinosaurs: A Story of Survival! This family-friendly show will premiere on Saturday, May 21. 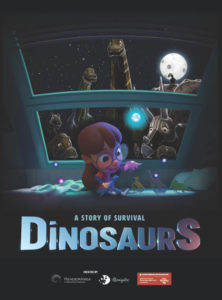 Like almost all children, Celeste is fascinated with dinosaurs. In Dinosaurs: A Story of Survival, Celeste meets Moon, a very wise and magical character. Moon poses a tantalizing question: “What if I told you that there are still dinosaurs among us?”

Celeste will join Moon in a journey through time and space. They will see the fascinating transformations that dinosaurs underwent over millions of years, creating giant creatures, armoured beasts and super predators, until the day that a cataclysmic impact event caused a mass extinction on Earth.

But all is not lost. Celeste will discover the key to the survival of the dinosaurs… and meet their present descendants.

Get your tickets today.

Dinosaurs: A Story of Survival is generously supported by Travel Manitoba.

Between May 21 and September 5, 2022 some exciting visitors will be at the Manitoba Museum. Come and see giant full-scale skeletons of new and exotic dinosaurs from the other side of the world in our blockbuster exhibition, ULTIMATE DINOSAURS!

This blockbuster exhibition combines rarely-seen creatures from around the Southern Hemisphere with interactive stations that highlight the scientific study of fossils. It also incorporates augmented reality technology, transforming the huge dinosaur skeletons into flesh-covered moving creatures right before your eyes! 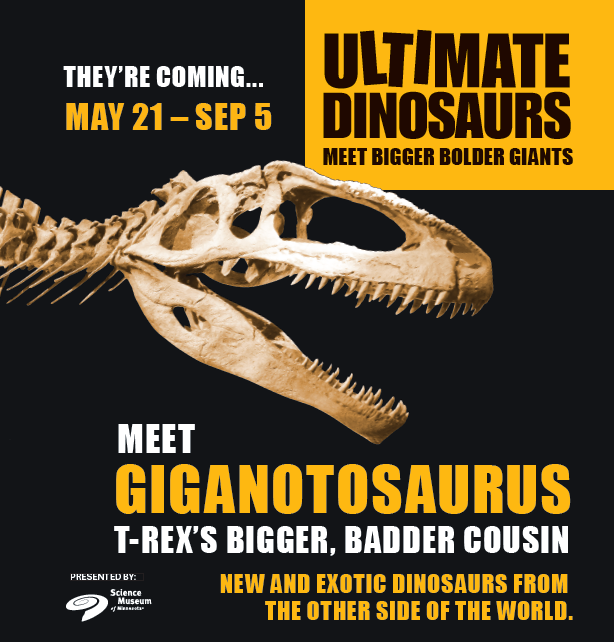