ON A WILD GULL CHASE – a rarity from afar

Jan 20, 2011
Most of us, other than those interested in birds, don’t take much notice of the comings and goings of gulls. Some might even consider “seagulls” a nuisance of sorts as they soar effortlessly overhead… and metabolize. If pressed for natural history facts, though, it might be observed that gulls are here when it’s warm(er) and gone when it’s cold. Which seems simplistic, but is actually quite accurate. Gulls are much better harbingers of spring than the proverbial robin. Robins frequently overwinter in the southern third of Manitoba, whereas gulls of all species are almost universally gone by early December and will return in numbers only in late March or April. 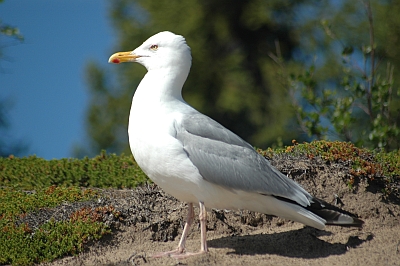 For this reason, seeing any gull in December is noteworthy. So as I crossed the border from North Dakota into Manitoba returning from a post-Christmas soccer tournament in Minneapolis, I was shocked to see a gull flying north along Highway 75 parallel to the car. Despite eye-rolling from family (now used to, but not encouraging of, Dad’s bird diversions), I found a spur road and tried to track down the unusual feathered visitor. The impeccable timing of a train passing between us and the flying bird, and the complication of choosing the wrong side of a divided highway made a re-sighting challenging. But with help from bemused passengers, and after crossing to the west side service road, we did glimpse the gull just before it magically vanished! Cruising the service road just south of St. Jean Baptiste I managed to spot the bird huddled forlornly among the snow-drifted cattails of the drainge ditch beside the highway. 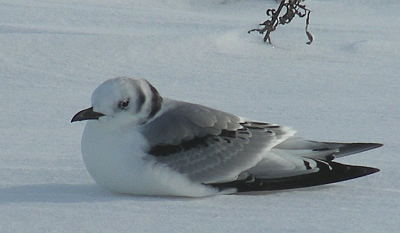 It was clearly a first-year bird, probably a Black-legged Kittiwake! It wasn’t until back in Winnipeg and after studying fieldguides and sharing my photos with more knowledgeable birders that I was certain. (I’ve always liked gulls, but their identification I find tricky.) This is only the third record for southern Manitoba! There are fewer than ten records for the province and most have been during the summer along Hudson Bay. The kittiwake is one of the more pelagic (ocean-going) gulls, breeding on cliffs along northern and temperate oceans of North America, Eurasia and the high Arctic, spending the remainder of the year at sea. So it is not surprising it is such a rarity in southern Manitoba.

So where did it come from? Hard to say, but there have been a surprising number of kittiwakes reported from the midwestern states this last fall and early winter. In November, Nebraska and Minnesota each had one bird, and South Dakota had two at Pierre through at least the Christmas season. There was even one as close to Manitoba as Grand Forks, North Dakota in November (maybe, like some Manitobans, getting some early Christmas shopping in). It is possible that the Manitoba kittiwake was driven north by the incredible blizzard that hit North Dakota and Minnesota and was nipping at the heels of my family and I as we raced home that day to beat the weather. 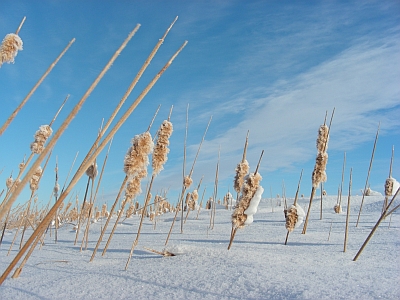 A frigid, but gorgeous prairie morning.

Because the kittiwake looked a little out of sorts, was clearly lost, and no one had managed to find the bird subsequently, a little less than a week later I thought I’d see if I could find its carcass to add to the collection. Looking for a mostly white bird in the drifting snow is worse than looking for a needle in a haystack, but I felt it to be a couple of hours well spent  – we have no Manitoba specimens of this species in the Museum collection. So I was back in St. Jean on a bone-chilling morning on a fool’s errand. 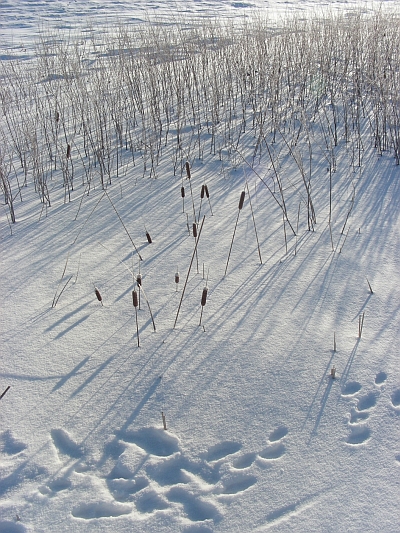 Cattails and their shadows, perhaps hiding a treasure. 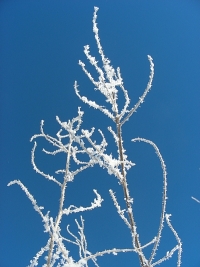 Frost-covered plants add to the chill.

I knew exactly where I had last seen it sitting on the snow, and I searched  a large area on foot, checking every suspicious snowy mound and looking for a few telltale feathers. I had no luck, but perhaps that meant that the bird had had some. I did flush a snowy owl and discovered instead a true winter wonderland of snow-capped cattails with their  shadows stretching over pristine snow, interrupted only by stories told by rabbit tracks.

Even an unsuccessful wild gull chase can have its rewards. 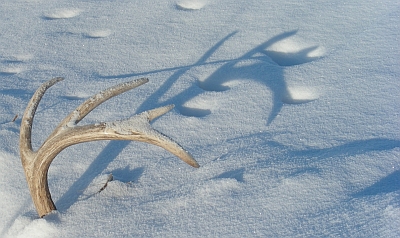 Perhaps the kittiwake avoided the fate that befell this buck whitetail.