Manitoba Jellies: not your Grandmother’s preserves

No, I’m not about to give a recipe for Saskatoon berry jam, but instead introduce some members of an animal group that most would never associate with Manitoba: jellyfish. Jellyfish are, of course, not fishes at all, but part of a very interesting phylum of animals called the Cnidaria [nie-dare-ee-a] that includes corals, sea anemones, and jellyfish. Some of you might remember high school biology and examining the superficially plant-like Hydra, a hydrozoan cnidarian, under a microscope. The term “jellyfish” refers to similar-looking stages of the lifecycles of various members of the Cnidaria that are not necessarily closely related. 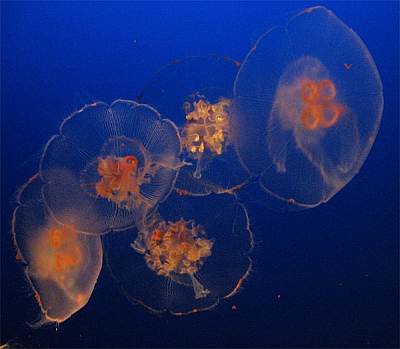 Aurelia, a genus of typical jellyfish found in Pacific, Atlantic, and Arctic Oceans. It is also known from James Bay and might occur off the Manitoba coast. Photo courtesy of G. Young, copyright.

The unique characteristic that links all members of the Cnidaria are very specialized cells called cnidocytes [nie-doe-sites] that contain some of the largest and most complex intracellular structures known – the cnidae [nie-dee]. These are hollow, harpoon-like threads that fire at or into potential food at speeds of over 9m/sec with the force of a bullet! They are either adhesive or inject a toxic cocktail of phenols and proteins to capture prey. [For a technical discussion, see Current Biology.] The hundreds of thousands of these cnidae that are triggered by the brush of a finger are what makes a sea anemone’s tentacles feel sticky. In some species of hydrozoans and jellfish with particularly nasty neurotoxins, cnidocytes (sometimes called nematocysts) are the cause of severe pain and even death in humans that might touch them.

But what, you might ask, do cnidarians (and jellyfish) have to do with Manitoba? Actually, cnidarians are incredibly common in the province, but mostly as fossils. Many species of fossil corals are known, and often make up part of the  popular Tyndall stone found cladding many buildings (including the provincial legislature and The Museum). Fossil jellyfish have recently been described from rock over 440 million years old by The Museum’s paleontologist, Dr. Graham Young. These and other discoveries form an integral part of the Ancient Seas gallery that opened just last spring. This award-winning gallery, using fossils and scientific animation brings that early Manitoba to life when cnidarians were commonplace here.

The Ancient Seas gallery and a peek at the large screen theatre that brings the fossils to life, including jellyfish and corals.

We also can’t forget that Manitoba has ocean frontage! Hudson Bay is home to over 60 species of cnidarians, including several species of jellyfish. The first image in this blog, the scyphozoan jellyfish Aurelia, is a genus recorded for James Bay. Not all of these species might wash ashore along our northern coastline, but some certainly do. One of the most spectacular is Cyanea capillata, the lion’s mane jellyfish, perhaps one of the largest invertebrates by some measures. Although most individuals are smaller, some have a bell (body) reaching over 2 metres in diameter and tentacles that are over 30 metres long! Our Arctic/Subarctic gallery  has a meticulously prepared model of this species. 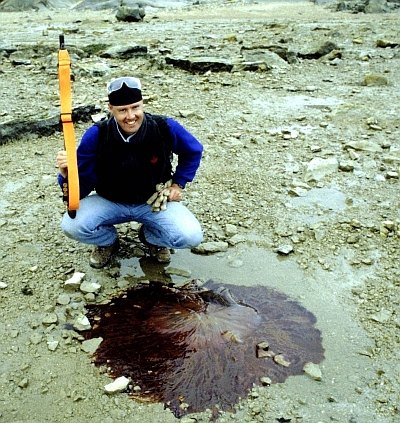 A lion’s mane jellyfish, Cyanea capillata, washed ashore in the Churchill River estuary in Manitoba. The bell (body) on this specimen is about 50cm across. Photo copyright of David Rudkin, Royal Ontario Museum.

For a more southern taste of jellyfish, you might recall the report late last summer of a “first” record of jellyfish for the province in the Whiteshell area (southeastern Manitoba). There were reports of a bloom of small jellyfish about the size of a quarter or smaller, found in the hundreds in a couple of isolated bays of Star Lake. The species of jellyfish is Craspedacusta sowerbyi, harmless to humans, but a critter with an interesting history. It was originally described in the 1880s from ornamental water lily tanks in London, England, and thought to have come from South America. Further research suggests it is actually a Chinese species. With the popularity of aquatic ornamental plants and through other means, it had made its way to eastern North America by the early 20th century and has gradually spread throughout large portions of the United States and southern Canada. It has been regularly reported from Wisconsin and Minnesota since about 1969, so it would have seemed only a matter of time before it would turn up in Manitoba. 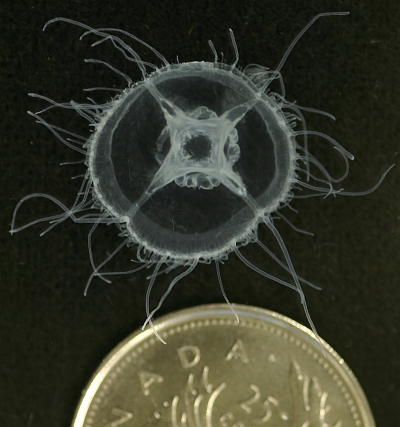 The freshwater jellyfish, Craspedacusta sowerbyi, of variable size but no bigger than a quarter.

As it happens, this species of freshwater jellyfish was recorded by a reputable source in Star Lake and other Whiteshell area localities as early as 1972! Unfortunately, no voucher specimens were retained at that time, but The Museum was fortunate enough to obtain a small collection of this year’s bloom from Doug Collicutt. These will provide a permanent physical record of the species’ occurrence in the province. 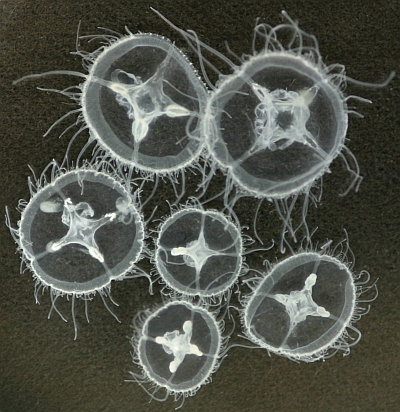 Some of The Manitoba Museum specimens of Craspedacusta from Star Lake. The specimen at the upper right is the one with the quarter in the preceding image. Most are much smaller than a quarter.

Our Manitoba freshwater jellies occur in obvious blooms in a lake ringed by cottages, so how did they manage to be seen in 1972 and not again until 2010! The answer probably lies in its lifestlye. Like most cnidarians, Craspedacusta exhibits an alternation of generations, that is, part of its life history is spent as an inconspicuous asexual polyp attached to aquatic plants or other underwater substrates in rivers, lakes or stagnant ponds. The polyp buds off new polyps that can remain attached to the parent to form a colony (less than 10mm), or to be released as a frustule larva that can move around before metamorphosing into a new polyp. The polyp can avoid unfavourable conditions (like winter) by entering a resting stage called a podocyst. It is believed that it is during this phase that the species is transported to new habitats and has managed to spread from China to North America and around the world. The podocysts become polyps again in summer. When conditions are just right, usually requiring high water temperatures (about 20-25°C), the polyps bud off free-swimming hydromedusae, the part of the lifecycle that we recognize as jellyfish. These hydromedusae (jellyfish) are either male or female, and will release eggs and sperm to produce a new kind of larva, the planula, that grows into a polyp. 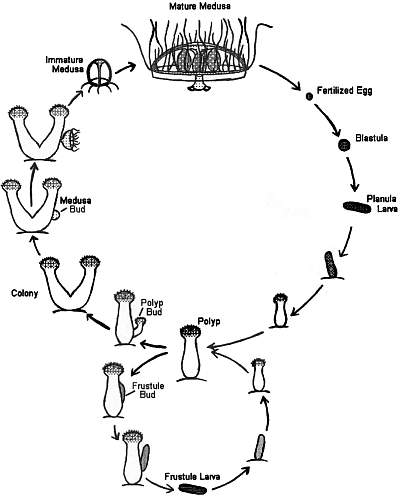 The lifecycle of Craspedacusta sowerbyi. The medusa stage, or jellyfish, is a very small part, and only occurs when water temperatures are high. Reproduced with permission of Dr. T. Peard.

The high temperatures required to produce the jellyfish stage explains why they are found only in late summer, as our lakes take a while to warm up. And it also explains why these blooms of jellyfish are so rarely seen; most of our lakes won’t normally reach the required temperatures. The species goes quietly about its business as a podocyst in winter and a polyp in summer, only very rarely encountering the conditions favourable for producing the jellyfish stage – the conditions during 1972 and 2010. Although it is known that several years can go by between blooms, jellyfish might have been produced between these dates, but the conditions are so fleeting that perhaps few jellyfish would have been produced and perhaps missed by the casual observer.

Finding freshwater jellyfish in such a frequented spot in Manitoba is exciting! Although this species is a foreign invader, research has yet to show if it harms native organisms, but one might expect it would provide at least some competition for the small water animals it eats. Regardless, its unexpected occurence shows there remains a great deal of undiscovered animal diversity right in our own backyards. And some of these Manitoba “jellies” are preserved for study at The Manitoba Museum.

So keep your eyes open for jellyfish around your cottage this summer. If you find any,  please report them to me, Manitoba Conservation or to freshwaterjellyfish.