During the Great War (1914-1918) Canada interned thousands of German and Ukrainian immigrants. Internment camps were set up across the country and a few ‘receiving stations’ were opened to process and hold those slated for internment. One of these receiving stations was located at the Fort Osborne Barracks in Winnipeg.

In 1914 Canada adopted the War Measures Act, giving the federal government sweeping powers. It allowed the government to set up internment camps and create the category of enemy alien — a designation given to people who had been born in one of the countries Canada was fighting during the war and who wasn’t a naturalized citizen. Some Germans were interned, but the vast majority were Ukrainians who had immigrated to Canada from the Austro-Hungarian provinces of Galicia and Bukovyna. By the turn of the century, there was a sizeable Ukraine population in Winnipeg. Ukrainians were not treated well in Winnipeg before 1914 but with the outbreak of the war, they were increasingly seen as a threat. Of the 8,579 people who were interned, 5,954 were ‘Austro-Hungarian,’ or Ukrainian. 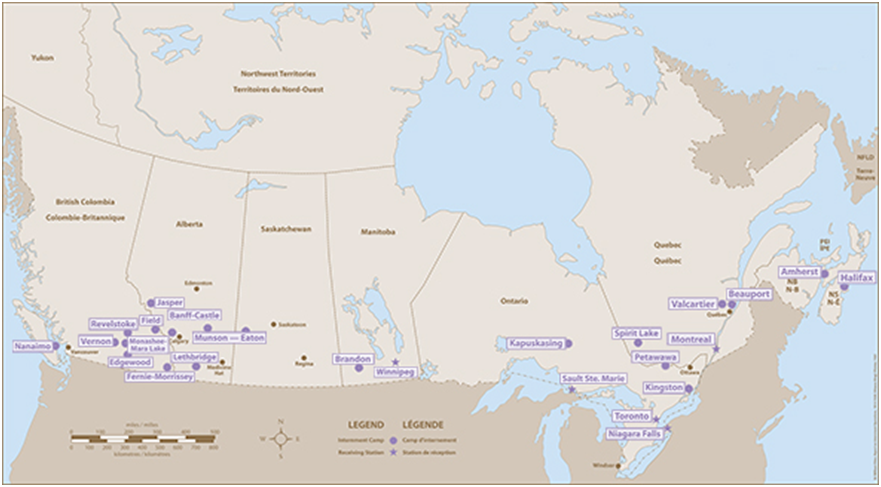 This map shows the internment camps and receiving stations that were in use during the Great War. pc.ga.ca

Over 80,000 ‘enemy aliens’ had to register with the authorities. They had to turn in any guns, swear that they would not leave Canada, and carry official papers with them. Several thousand ‘enemy aliens’ were arrested and sent to internment camps. They were arrested for a number of reasons including: being unreliable, trying to cross the border, not carrying their papers, acting suspiciously, and being unemployed. Volunteering to join the war effort also led to internment! Those who were arrested were sent to an internment camp for the duration of the war. Before that, they were processed at a receiving station, like the one in Winnipeg. 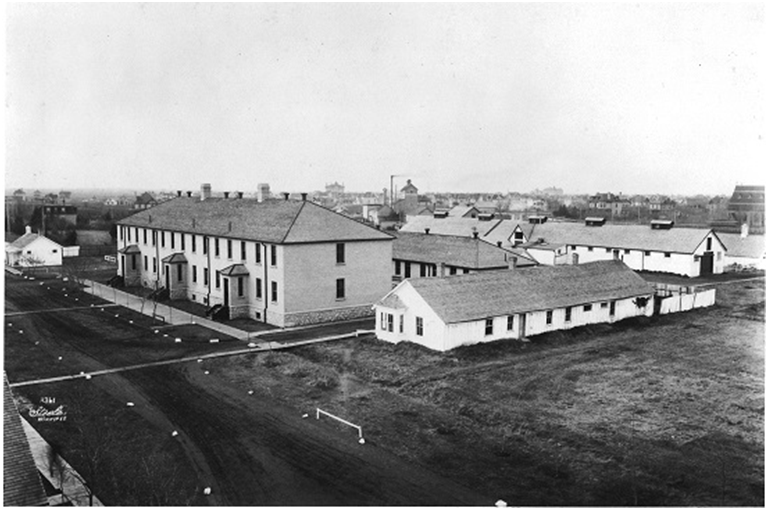 The receiving station was set up at the Fort Osborne Barracks, which at the time was located along Osborne Street, between Assiniboine Avenue and Broadway (on the current Legislative Grounds). It was in operation from September 1914 until July 1916. When Retired General William Dillon Otter, who was in charge of the internment operations, visited the Winnipeg receiving station in November 1914, he noted that 75 “prisoners” were already there, and 25 more were expected that night. About ¾ of those at the receiving station were Ukrainian. Upon arrival each internee was given clothing, a place to sleep, and they were fed.

Some people tried to escape. In September 1915, Martin Baraszchuk escaped from the receiving station by jumping out a window at the barracks. He had just been captured after escaping from the Brandon internment camp, and clearly did not want to be sent back. After jumping out the window, he was shot at by the military personnel guarding the Barracks, but they missed, and he was free for ten days, before being re-arrested and sent back to the receiving station.