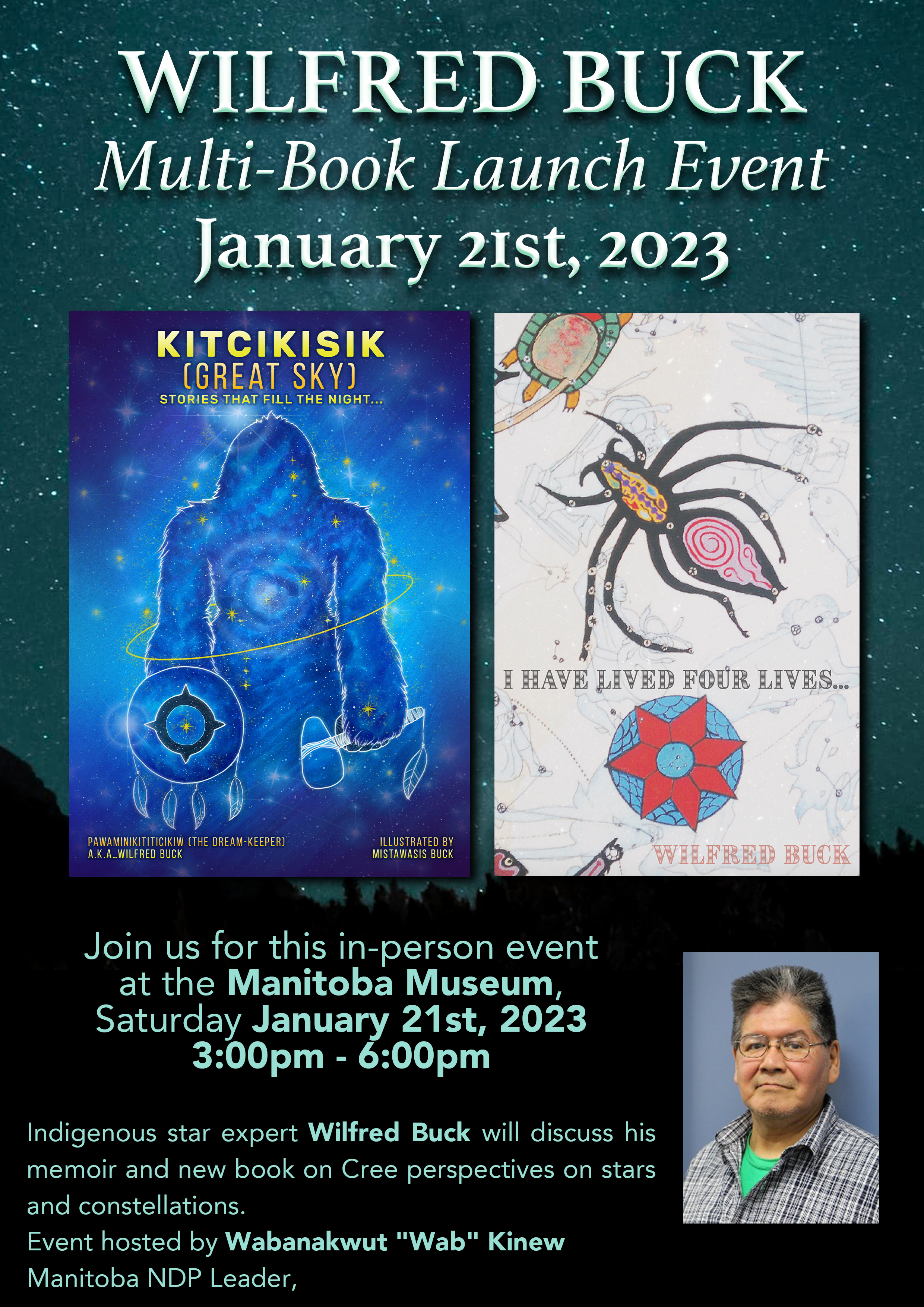 Join us for a multi-book launch with Indigenous star expert Wilfred Buck (Pawami niki titi cikiw). Wilfred will be joined by Wabanakwut “Wab” Kinew MLA, Leader of the Manitoba New Democratic Party and Leader of the Opposition in the Legislative Assembly of Manitoba, to discuss Wilfred’s memoir and the new book on Cree perspectives on stars and constellations.

This in-person event will be held in the Manitoba Museum’s Auditorium on Saturday January 21, 2023, starting at 3 pm.

I Have Lived Four Lives (Cover Illustration from A.S. Lee’s Cree Star Map) is a memoir, commencing by explaining how the word Ininew refers to the phrase mixing of four. Wilfred Buck embarks upon a series of dazzling stories: herein is the story of how I lived and how I died, and how I lived again, along with the dreams I have dreamed and the visions I have seen. In this unique collection of writings, Buck, an Ininew Dream Keeper (Pawami niki titi cikiw), illustrates four separate stages of personal experience. The stories in I Have Lived Four Lives are designed as aids to the discovery and healing for Indigenous youth, and encompass a range of hilarious and vivid recollections that revolve around visions and dreams and that ultimately trace Buck’s path to becoming a teacher in Indigenous cosmology and astronomy.

In Kitcikisik (Great Sky): Tellings That Fill the Night Sky (Cover Illustrated by Mistawasis Buck), the stars of the Big Dipper are the focus. In this book, we hear of Mista Muskwa (Great Bear), Mikisiw Mikwun Atik (Eagle Staff), Mistatim (Horse), and Ocik (Fisher). Cree and Cree syllabics, images, diagrams, constellation maps, and original artwork are included in Kitcikisik.

We will also be introducing ACAK MUSINIKANUK (Spirit Cards).

Books, posters, and Spirit Cards will be available for purchase on-site.