Geology of the Canadian Museum for Human Rights: Part 1 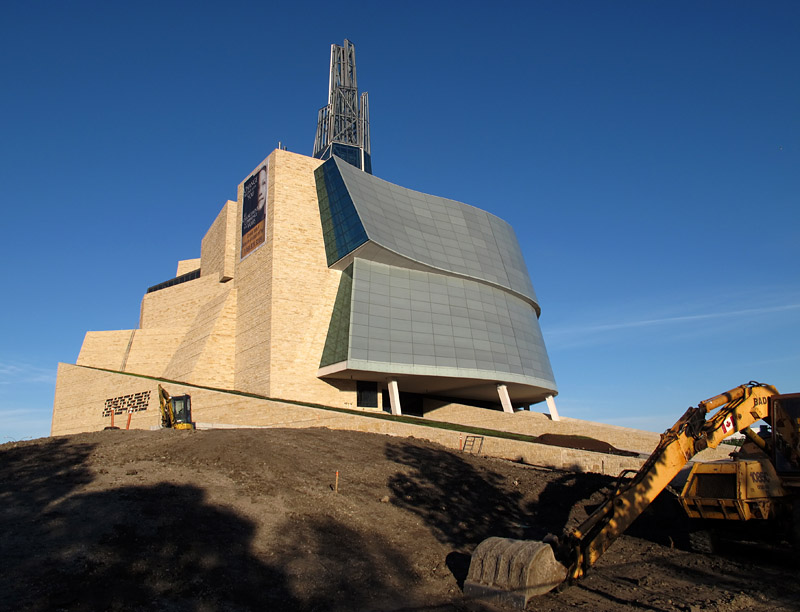 Construction site at the Canadian Museum for Human Rights, June, 2013 (please click on images to enlarge)

The construction of the Canadian Museum for Human Rights (CMHR) in Winnipeg has been the subject of tremendous public interest and media coverage. As opening nears for this institution, our first national museum outside the Ottawa area, I have read discussions of the planned exhibits and galleries, conversations concerning the relationship between the museum and local communities, and assessments of the architecture of the spectacular building. I have not, however, seen anything on a topic that may be of great interest to this page’s visitors: is the Canadian Museum for Human Rights worth looking at for its geological features?

Having received a tour of the interior construction site in April, followed up more recently by careful examination of the building’s exterior, I have to respond to this question with a full-voiced “yes.” The CMHR does not contain as great a variety of building stones as some older buildings in downtown Winnipeg, but some of the materials are of types not readily seen in other structures, and the immense scale of the structure permits a geological experience that may be unparalleled elsewhere in this town. 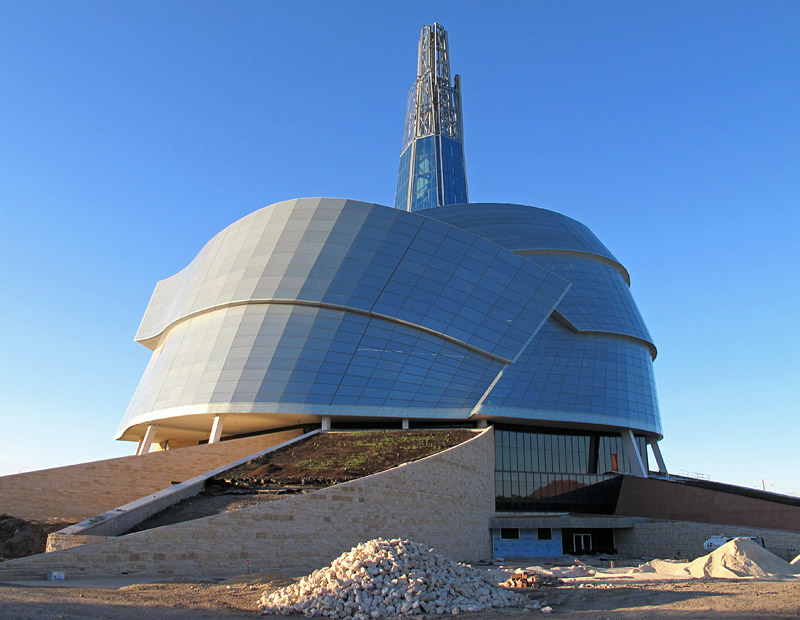 Outside the museum, stone is being installed to integrate the building with the surrounding landscape.

The following descriptions are based largely on my brief observations of a building still very much under construction, along with what I could glean from the web and some information received from helpful staff at CMHR. Since a thorough examination is not possible at this stage, and since surfaces were still being installed when I saw them, it is entirely probable that I have missed or misinterpreted some of the geological materials. I am also, for the moment, ignoring the site geology and materials other than stone. At some point in the future I hope that we can write a detailed consideration of CMHR’s geology, comparable to our work on the Manitoba Legislative Building (a pdf can be found here [note: file size is 20 megabytes]). 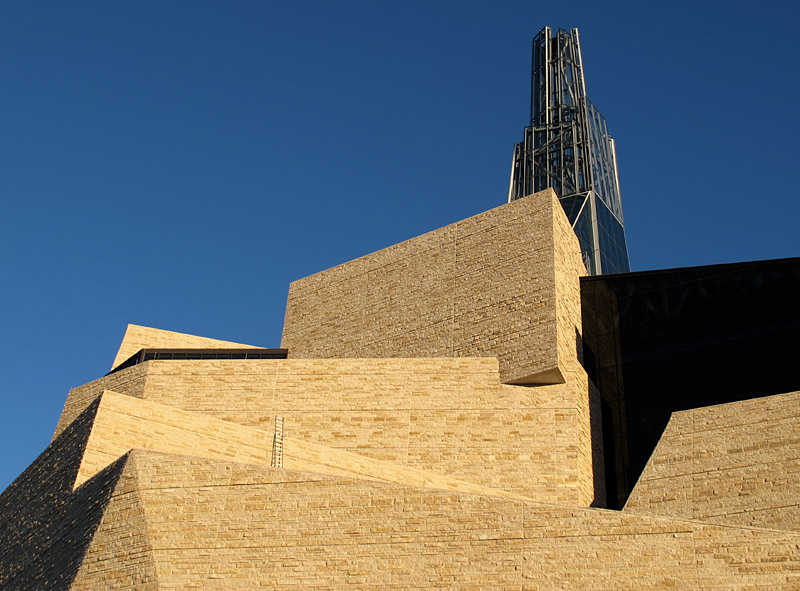 On the building’s exterior, Tyndall Stone walls appear as a stack of irregular polygons.

To a Winnipegger walking outside the CMHR, the immense surfaces of Manitoba Tyndall Stone are both familiar and obvious. Since this stone is locally ubiquitous, I will instead begin with the more unusual materials in the museum’s interior. As you enter the building, some of the introductory areas seem dark and low, walled largely with ochre-coloured concrete along with feature walls of other materials. Passing upward into more open spaces, you have your first glance of the extensive ramp system that allows visitors to walk through the many museum areas. 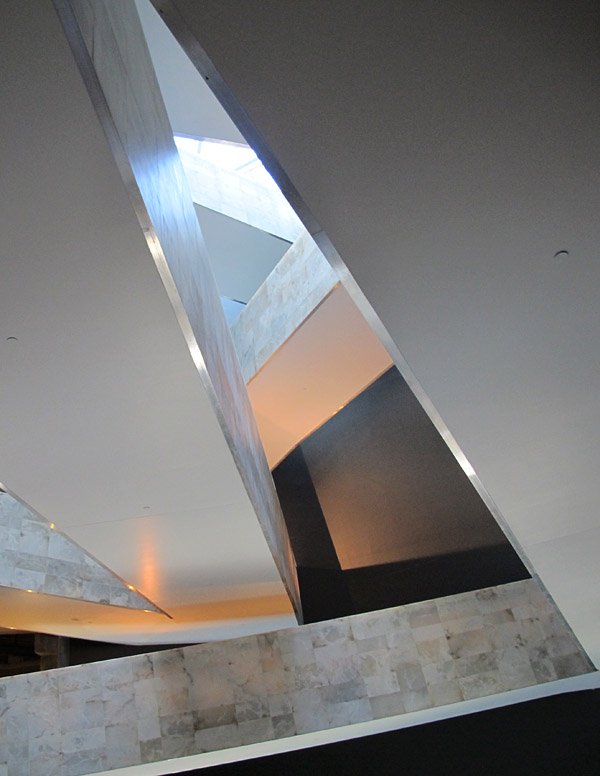 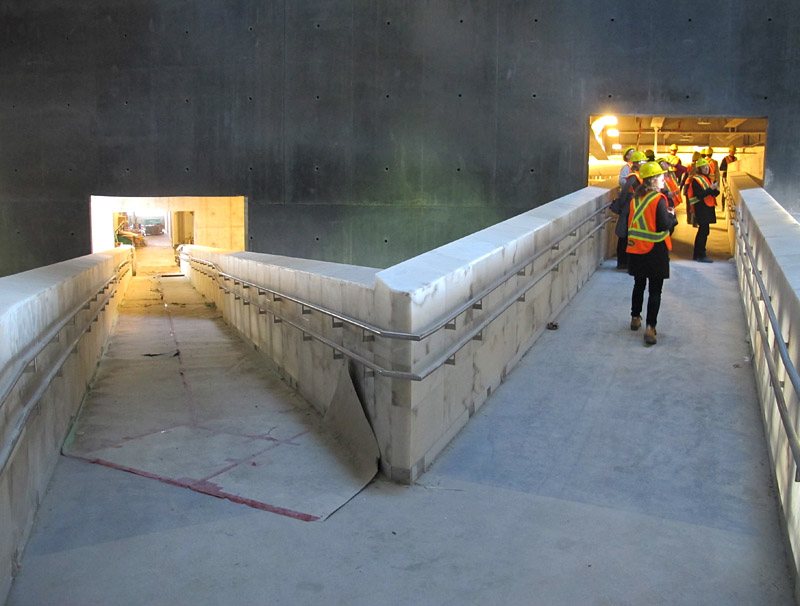 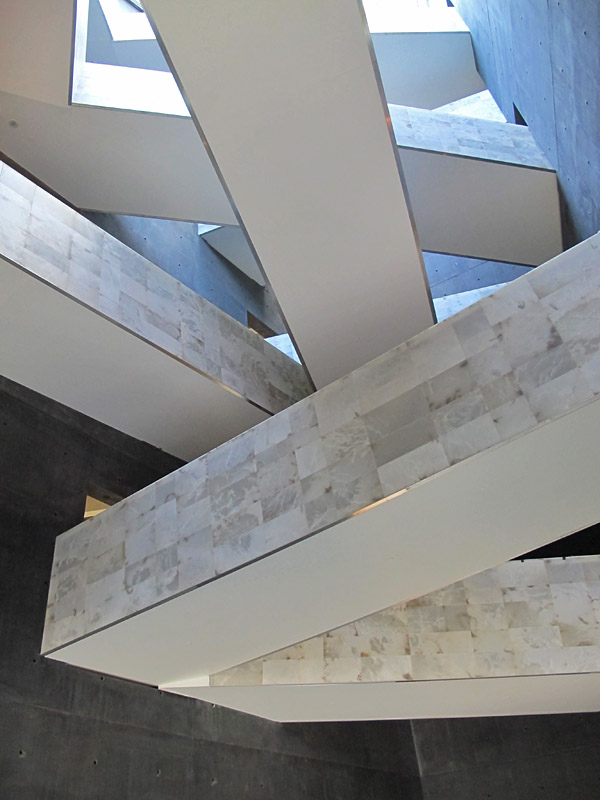 The walking surfaces of the ramps are concrete, but the sides are Spanish alabaster, quarried in Zaragoza, Aragon, Spain. Alabaster is a translucent, lustrous stone, long used by humans because it is beautiful and easy to work with. The CMHR alabaster is cut quite thin, about 2 cm (or 3/4″), and with the natural light it glows magically when backlit. 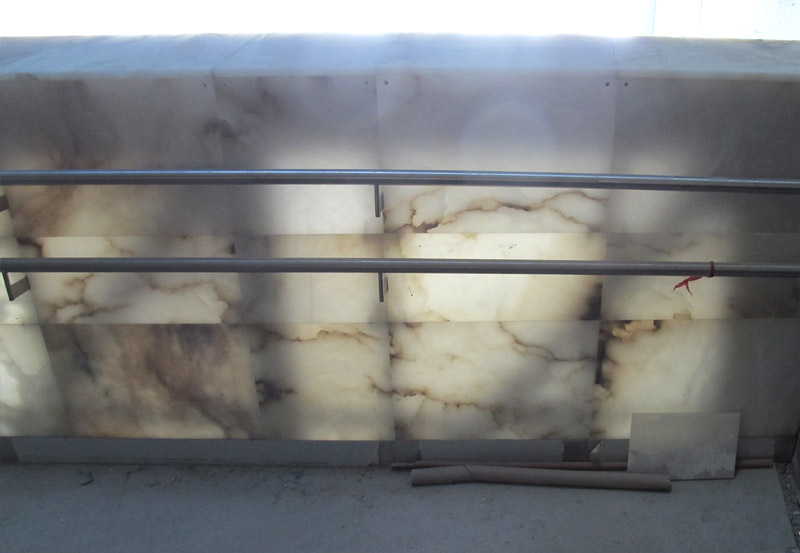 Translucent alabaster on the side of a ramp

Geologically, two major types of material are considered as “alabasters”: gypsum (hydrous sulfate of calcium) and calcite (calcium carbonate). Neither kind of alabaster is resistant to rain and moisture, so both are only suitable for indoor use. The CMHR alabaster is of the gypsum sort; it is quite a soft material, but the crystals are tiny and tightly bound together, permitting both the polish and the translucent quality. Pure alabaster is white, and the beautiful colours and patterns actually come from impurities such as clays. 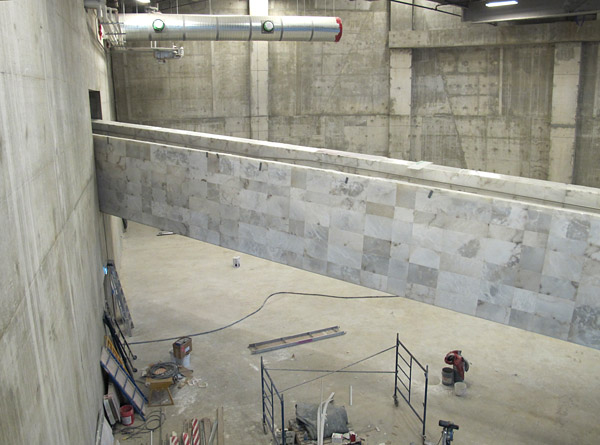 These views of ramps show the beautiful variation in tone and colour of alabaster. 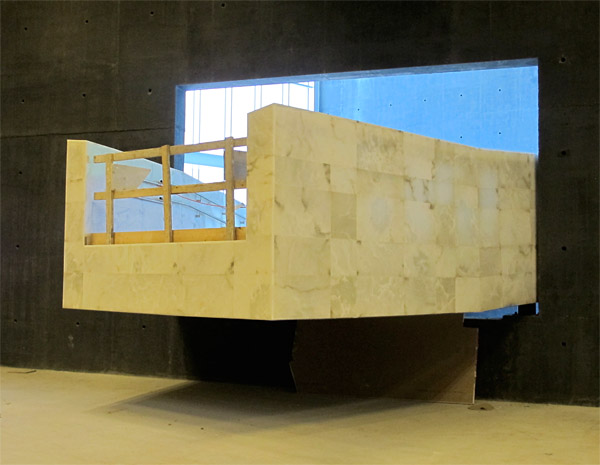 The Aragonese alabaster was quarried from near-horizontal beds in the Ebro Basin of northeastern Spain. It formed during the Oligocene and Miocene epochs (roughly 34 to 5 million years ago). During this interval, the Ebro Basin was endorheic (i.e., it had internal drainage and was not connected to the sea). As a result the water often became very saline (briny), and salts were precipitated out to form bedded chemical rock, most notably the gypsum that makes up this alabaster. The Aragonese alabaster is quarried by Alabaster New Concept.

Manitoba also has considerable gypsum deposits in our Jurassic sedimentary rocks. These can be seen at places such as Gypsumville and Amaranth, but as far as I know there is none of alabaster grade.

Part 2 of this geological tour will follow soon, with an explanation of the dark stone that can be seen in the spectacular Garden of Contemplation and other places in the museum’s interior.