I was recently watching the hilarious yet scientifically accurate video on the mating habits of bees done by Isabella Rossellini (http://www.sundancechannel.com/greenporno/?playlist_id=14433699001#video_section).  Coincidentally, I’ve also been reading about the quite bizarre and sometimes gruesome life cycles of wild pollinators for my upcoming Prairie Pollination exhibit.  Inspired by Isabella, I found myself wondering what it would be like if people were like pollinators… 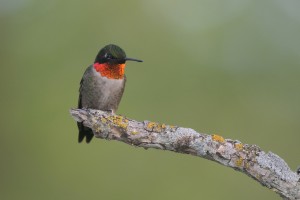 If people were like hummingbird pollinators, we would run as fast as a car drives on the highway.  A 150 lb person would drink at least 300 lbs of soda and maple syrup every day (woo hoo sugar rush!).  When the sun set we would enter a state of torpor, collapse on our beds and remain completely immobile until the sun rose and warmed us up. 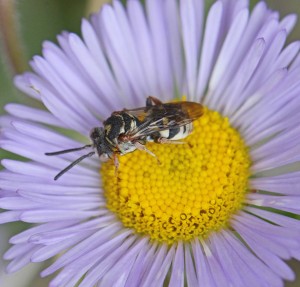 A Cuckoo Bee on a Fleabane. Credit: Diane Wilson. Used with permission.

As opposed to the frenetic, sugar-fueled travails of the hummingbird, life for a mother bee would be a lot like a horror movie.  As you were coming home from the hospital, new baby in hand, a Cuckoo Bee might stalk you.  It would break into your house while you were asleep and deposit its baby into your baby’s crib.  Then the Cuckoo Bee baby would eat your baby and crawl around your house eating all the baby food that you bought.  Horrifying!

While shopping at the grocery store, you might get attacked by an external parasite like a Braconid Wasp (Braconidae).  An adult would glue an egg to your back in that little spot that you can’t quite reach.  The hatched parasite would survive by sucking your blood but fortunately usually not enough to kill you.  Instead you would be weakened and perhaps if you are in poor health and are unable to convince someone to take it off, die an early death.  You would also look ridiculous with that thing hanging on your back! 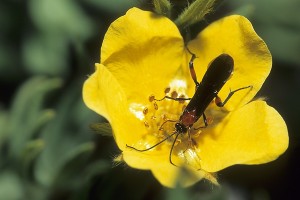 Alternatively, a Thick-headed Fly (Conipidae) or an Ichneumonid Wasp (Ichneumonidae) might jump on you and quickly inject one of their eggs into your body.  You would go about your business for a while and then get sicker and sicker as the hatched larva began eating you from the inside out until you collapsed and died.  At your funeral the parasitic larvae would burst out of your chest to the horror of all.  Yes, I know that’s the plot of the movie Alien but that is the actual fate of some insects! 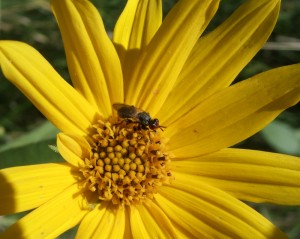 Ironically, some parasites of bees and butterflies are pollinators in their own right so their existence is ultimately beneficial to wildflowers in an ecosystem.  In fact, the abundance of some of these parasites is actually an indicator of the overall health of the pollinator population.  Essentially, if there aren’t enough bees to support their parasites then the population of bees must really be in trouble.  Further, they may actually help improve the resilience and productivity of an ecosystem the way other top carnivores like wolves and sharks do.  Unfortunately this topic has been virtually unstudied so we really don’t understand the true impact of pollinator parasites on ecosystem functioning.  So don’t hate parasites because they kill-they’re just part of the sometimes morbid circle of life that we humans seldom see.