The botany of libations

With the holiday season beginning, I often find myself thinking about celebrations and how frequently alcohol is part of them.  Although people are familiar with the different kinds of alcohol-rum, vodka, beer etc.-not everyone knows what they are made of.  And what is the difference between lager and ale anyway?  Well you’re in luck.  Alcohol comes from plants and ethnobotany is one of my areas of expertise.  So if you’re terrible at small talk, here are a few bits of alcohol-related trivia that you might want to use as a conversation starter at your next holiday party!

Alcohol Made From Grains: Beers and Whiskeys
Thanks to the multitude of beer commercials out there, you probably know that beer is made from barley (Hordeum vulgare) grains.  Unless it’s made from wheat (Triticum aestivum) in which case it’s called Weizenbier or Wheat beer.  But you might not know that some beers are brewed using corn (Zea mays), millet (Panicum miliaceum) or sorghum (Sorghum bicolor), (e.g. African Pito beer).  In fact most of the most popular commercial American beers mix corn in with the barley to reduce the cost.  The fragrant flowers of the hop plant (Humulus lupulus) are typically used to flavour beer but some breweries add spices or fruits like raspberries (Rubus) or pumpkins (Cucurbita maxima) to produce a more complex tasting beverage. 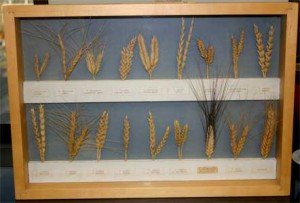 Wheat is used to make weisenbier or wheat beer.

So what’s the difference between lager and ale?  Lager is fermented under cold conditions and ale at room temperature using different kinds of yeast, which are by the way are a kind of fungus.  In fact, alcohol is the waste-product of brewer’s yeast (Saccharomyces cerevisiae).  So technically when you drink alcohol you’re drinking fungus-urine!  But clearly that name didn’t have market appeal hence the names beer and wine. 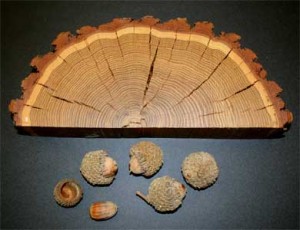 Oak barrels are used to age wine, whiskey and brandy. 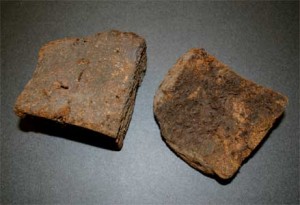 When beer is distilled, a process in which some of the water is removed by heating or freezing the beer, the alcohol becomes concentrated and therefore more potent.  Medieval alchemists considered distilled alcohol to be magical.  In fact the words whiskey and aquavit both mean “water of life”.  Whiskey, scotch, gin, bourbon and some vodkas are made from distilled beers to which hops are not added, although vodka can also be made using potatoes (Solanum tuberosum), sugar beet (Beta vulgaris) and even soybeans (Glycine max)!  Scotch is a special whiskey made by drying malted (=germinated) barley over a peat moss (Sphagnum) fire, adding some peaty water to the malt and storing the finished product in oak (Quercus) casks for at least three years.  Gin is a clear whiskey that has been flavoured with a variety of plants, most prominently juniper (Juniperus).  Bourbon obtains its distinctive taste by being aged in charred oak barrels. 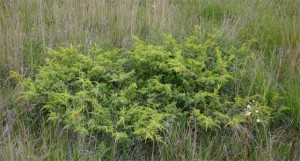 Juniper “berries” which are really fleshy cones, are used to flavour gin.

The Japanese beverage sake is also a kind of beer made with fermented sake rice (Oryza sativa) not the rice varieties that we eat.  However, both yeast and a mold (Aspergillus orzyae) and are used in fermentation.  The exact same species of mold is also used to make soy sauce. 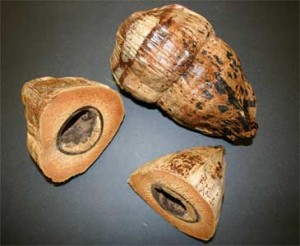 Coconut flowers are used to make the libation Arrack.

Alcohol Made from Flowers: Mead and Arrack
Popular in Medieval times and available in some liquor store is the beverage mead.  Mead is fermented honey water, which is actually flower nectar.  As honey tastes different depending on which plants the bees were foraging on, so will any resulting mead.

Another alcohol made from flowers is Arrack.  The milky sap of coconut (Cocos nucifera) flowers is extracted and fermented to produce this beverage, popular in southeast Asia.

Alcohol Made From Fleshy Fruit Juice: Wine and Brandy
In contrast to beer, wine is made from fermented juice, most typically grape (Vitis vinifera) which is a kind of berry.  However “wine” can be made from other kinds of juice; whether it is any good is another question entirely.  Chokecherry (Prunus virginiana) wine is one of the more popular wild fruit wines here on the Canadian prairies and I’ve had some nice ones before but also some truly awful ones.  “Wine” made from the juice of apples (Malus domestica) is called cider. 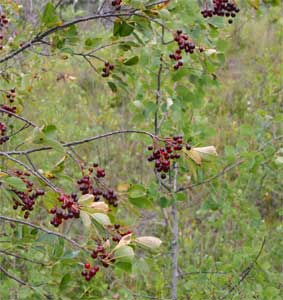 Chokecherry fruits can be used to make “wine”.

Juice from other fruits is also used to make alcohol but many of these products are distilled to form brandy (which means “burnt wine”) rather than being commonly available as “wine”.  In addition to distillation to concentrate the alcohol, the resulting fluid is typically aged in oak barrels.  Popular fruit brandies include Poire Williams (pear or Pyrus communis), slivovic (plum or Prunus domestica), Frambois (raspberry or Rubus), French Abricot (apricot or Prunus armeniaca), kirsch (cherry or Prunus cerasus), Boukha (figs or Ficus carica), apple (Calvados) and Kislav (watermelon or Citrullus lanatus).  Bananas (Musa acuminata), which are basically, seedless leathery “berries”, can also be fermented to produce a banana “beer”, popular in some parts of Africa.

Alcohol Made From Stems and Roots: Rum, Tequila and Vodka
Alcohol is also made from the stems and roots of plants.  During photosynthesis plants produce a sugary sap in their leaves, which is transported through special tubes in the stems called phloem to the roots for storage as starch.  The most commonly known stem libation is rum.  Rum is made from a grass that produces lots of sugar: Sugar Cane (Saccharum officinarum).  The cane juice or molasses (the by-product of sugar production) is fermented and aged to produce rum.  The sap from Sugar Maple (Acer saccharum) trees can also be fermented to produce a kind of “maple rum”.  Palm wine is made from the sap of date (Phoenix dactylifera) and coconut (Cocos nucifera) palm trees.  Rhubarb (Rheum rabarbarum) stems can be crushed, mashed and fermented to produce a very nice “rhubarb wine”.

Tequila and mescal are alcoholic beverages produced by baking the fleshy leaves of Agave (Agave) plants that grow in the deserts of Mexico.  After baking the leaves, the agave juice is extracted, fermented and aged in wood barrels, usually oak.

The starchy tubers of potatoes and roots of sugar beets are also fermented and distilled to produce some kinds of vodka.  Since potato vodka is flavour-neutral it is often used as a base for flavourful alcohols (see below). 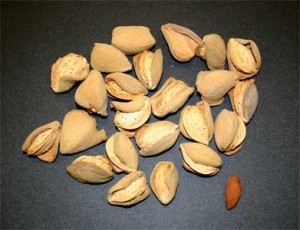 Almonds are used to make the popular liqueur Amaretto.

Flavourful Alcohols: Bitters and Liqueurs
Bitters and liqueurs are beverages made from distilled alcohol that has been flavoured with botanical ingredients.  A combination of flowers, spices, nuts, coffee (Coffea arabica), chocolate (Theobroma cacao), woods, fruits or herbs are soaked in the alcohol or distilled with it to impart various flavours.  Theoretically the combinations are endless as millions of flavour compounds can be found in the world’s plants.  Angostura bitters are commonly found in a number of popular cocktails.  Dandelion (Taraxacum officinale) “wine” is a bitter flavoured with dandelion flowers.  In general bitters are–you guessed it–bitter rather than sweet.  If you want sweet you’ve got to drink a liqueur, which is not only flavoured but has had sugar or honey and sometimes cream added to it.

So if you enjoy drinking you’ve got a lot of plants and fungus to thank!  And remember that if you are imbibing this holiday season don’t drive!