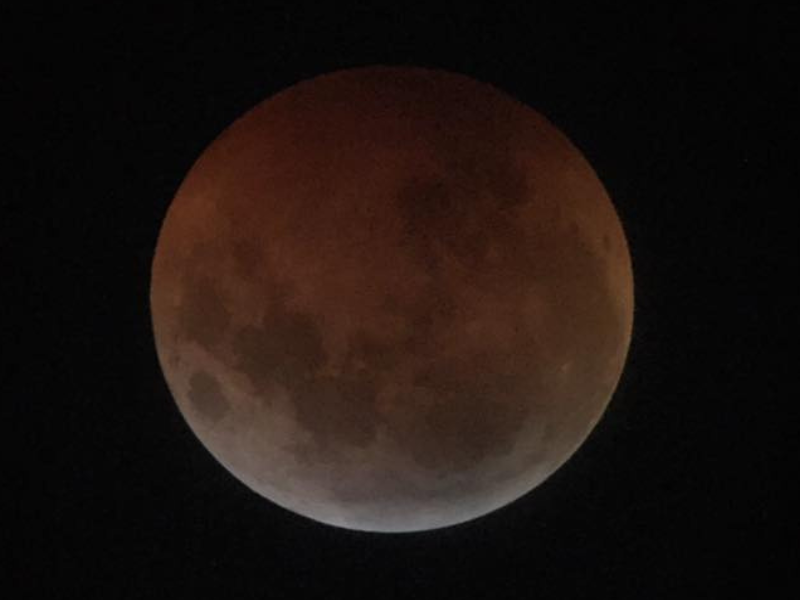 This November, all of Manitoba is treated to a total lunar eclipse. Totally safe to view, this event allows you to feel the motion of the solar system happen in real time. Here’s what happens, and how and when to see it yourself.

What Is Going On?

A lunar eclipse occurs because the Moon is just a big rock in space, and space is dark. The only reason we can see the Moon is that there is a nearby star – the Sun – that is shining on it, lighting up one half of the rock. It’s the same with our planet,- the Earth – half of the planet is lit but the sun’s light (the daytime side), and half of the earth is dark (the nighttime side) because the sun can’t get to it.  Since the Moon orbits around our planet, sometimes we see the daytime side side of the Moon, and sometimes we see the nighttime side of the Moon, but most of the time we see some combination of the two. This is what causes the regular phases of the Moon, from New Moon to First Quarter to Full to Last Quarter.

A lunar eclipse occurs when something blocks the sunlight from being able to light up the Moon. There’s only one thing that can do that – our planet, the Earth. During a lunar eclipse, the Moon moves into the shadow that the Earth casts. As the Moon moves in its orbit, we can see the Earth’s curved shadow creep across the face of the Moon over the course of an hour or so, and finally covering it completely.

Why Does It Turn Red? 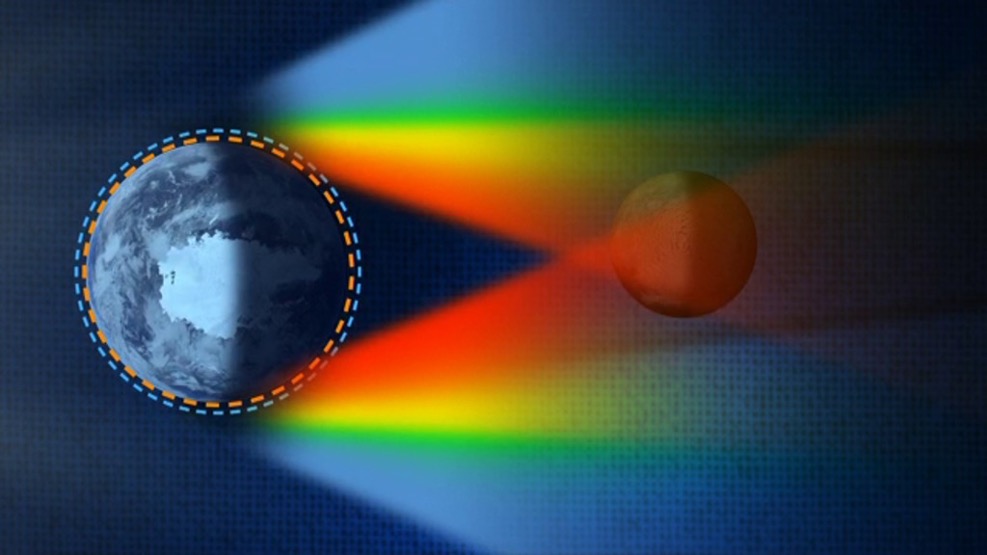 During a lunar eclipse, Earth’s atmosphere scatters sunlight. The blue light from the Sun scatters away, and longer-wavelength red, orange, and yellow light pass through, turning our Moon red. *This image is not to scale. [Image: NASA Goddard Space Flight Center/Scientific Visualization Studio]

If the Earth was just a rock in space, the Moon would totally disappear during a lunar eclipse. Luckily for us, the Earth isn’t just rock, but also has an atmosphere – a layer of gasses like oxygen that surrounds the planet. Besides providing us air to breath, the atmosphere can often do interesting things with light. The atmosphere can make haloes around the Sun or the Moon, it can make rainbows when it’s full of water or mirages when it’s hot, and it can make sunrises and sunsets turn red.

During a lunar eclipse, most of the light from the sun is blocked by the Earth, but a little bit goes through the layer of atmosphere and is bent slightly into a rainbow. This means that the edge of Earth’s shadow is quite “fuzzy” and sort of “fades in” from nothing to dark. The outer, fuzzier shadow is called the penumbra, and the inner, darker shadow is called the umbra. It also means that even when the Moon is in the umbra, the bending effect of the atmosphere allows the red and orange part of the sunlight to sneak into the earth’s shadow and still reach the moon. It’s like all of the world’s sunsets and sunrises are shining on the moon at the same time and letting that deep red-orange glow light it up. So, the moon often turns reddish-orange during the total phase of the eclipse.

BUT… the atmosphere isn’t just perfectly clear gas. There can be clouds of water vapour, there can be smoke from forest fires, there can even be ash from volcanic eruptions, and all of those can change who the light bends and how much of it gets to the Moon during the eclipse. Sometimes the Moon gets very dark, almost brown, while other eclipses the moon is a bright copper-orange colour. Each eclipse is different.

If you live in most of North America, you can see the eclipse just by going outside at the right time and looking at the Moon. This link will let you choose your location and do all of the time zone conversions for you so you know what time the eclipse phases start and end for where you live. For this eclipse, the western half of North America sees the whole thing, with people farther east only seeing part of the eclipse before the Moon sts for them. manitobans see essentially the entire interesting part before moonset occurs.

The only catch is that you need a clear sky without clouds to be able to see it. If it happens to be cloudy at your location, you can look for one of several live streams that will be going on from around the country. The [email protected] team will be live-streaming the eclipse on the Manitoba Museum’s Facebook page and YouTube channel beginning about 2:30 a.m. Central Time on November 8th (weather permitting). If our stream is clouded out, we’ll add links here to other events as we hear about them.

When Does It Happen?

The lunar eclipse occurs after midnight on Monday night, November 7th, in the morning hours of Tuesday, November 8th. The event technically begins at 2:02 a.m. Central time, but it lasts nearly six hours and not all parts are equally interesting. If you just want to catch the highlights and see the colour, watching for an hour between 3:45 a.m. and 4:45 a.m. Central should give you a good view. Of course, this may be affected by clouds, so make sure you check the weather forecast to make sure it will be clear when you plan to observe.

Technically the eclipse begins at 2:02 a.m. Central Time on November 8th, 2022, as the Moon enters the faint and fuzzy outer shadow of the Earth (called the penumbra). The penumbra doesn’t darken the moon much at first, but the shadow gets darker towards the middle and so you might not notice it until 2:30 a.m. or so.

Beginning at 3:09 a.m. Central time, the Moon starts to move into the dark central shadow of the Earth – the umbra. The umbra is dark enough that you can see it as a curved dark “bite” out of the left edge of the moon. Over the next hour, it will look like the shadow is moving over the Moon and covering more of it, but it’s actually the Moon moving into the shadow.

During the early partial phase, the umbra looks dark grey, but that’s because the lit-up part of the Moon right next to it dazzles the eyes. As the shadow covers more of the Moon, it will be easier to see that the umbra is actually a dark reddish colour.

At 4:17 a.m. Central time, the Moon moves completely inside the umbra, and the eclipse is total. Now, with none of the Moon lit directly, the colour becomes much easier to see. The colour changes slowly as the Moon moves through the Earth’s shadow, and the right side will eventually brighten. The Moon begins to leave the umbra at 5:42 a.m. Central time, with the left edge of the Moon emerging first. For southern manitoba, the Moon sets at 7:44 a.m. Central, just before fully emerging from the umbral shadow. Folks farther west will get to see the final penumbral stages of the eclipse, which last until 8:50 a.m. Central (5:50 a.m. Pacific).

To get the exact times of each stage of the eclipse in your local time zone, visit timeandate.com’s awesome eclipse page.