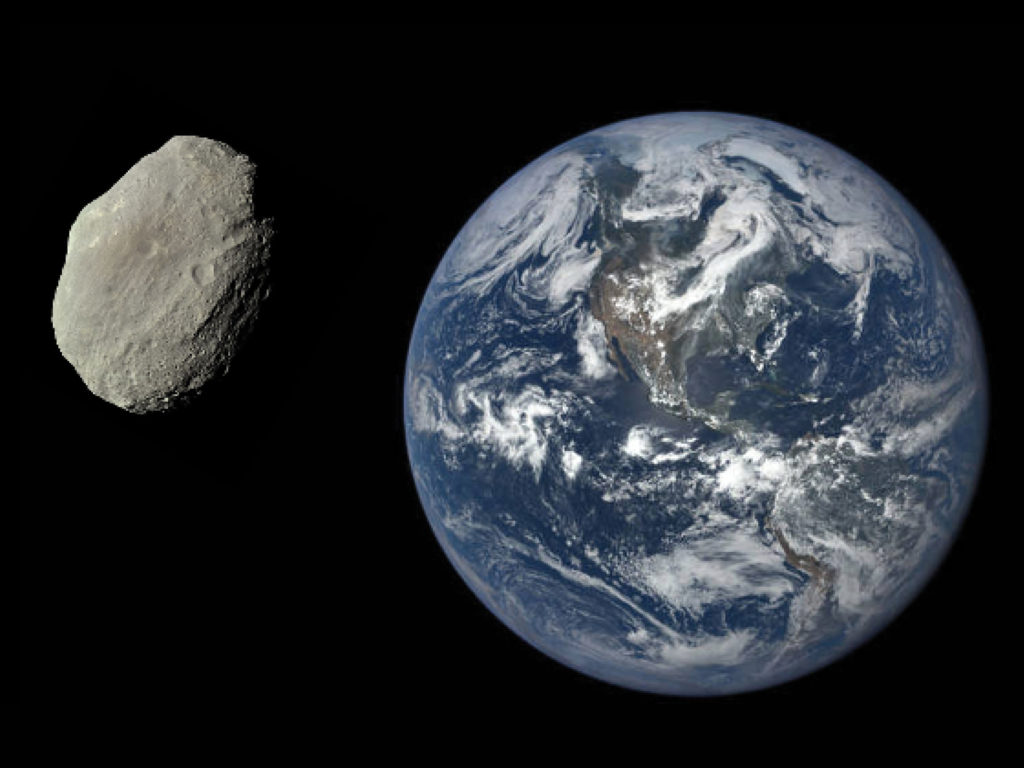 Asteroids pass close to the Earth quite often, but most are small. A large asteroid approaching Earth is cause for concern. Image: NASA

At the Manitoba Museum, we know that just about everyone loves dinosaurs. It’s easy to understand why. Dinosaurs grew to enormous sizes, existed all over the planet, and ruled the Earth for about 165 million years. Then, they disappeared –all at once– about 66 million years ago.

We also know that everyone, deep down, feels a sense of awe when confronted with a night sky full of stars. Space is also huge, mind-blowing, and out of reach yet visible every clear night.

The story of dinosaurs is told in fossils that we find in the rocks here on planet Earth, but the ending was written out in space. The most obvious connection between dinosaurs and space occurred when the dinosaurs went extinct. The prevailing theory is that an asteroid crashed into the Earth, setting off a chain reaction of worldwide forest fires, ash clouds that caused rapid climate change, and a collapse of the ecosystem. Dinosaurs, and 75% of all other life on Earth, died out in only a year or so – just a blink in geological time.

How do we know that? Science!

Science has shown that new layers of rock are formed as the Earth ages, creating a timeline of the Earth’s geologic past. All over the world, there is a layer of rocks about 66 million years old that is rich in a rare element called iridium and has no dinosaur fossils above it. Something happened 66 million years ago, and dinosaurs coincidentally went extinct at precisely the same time. 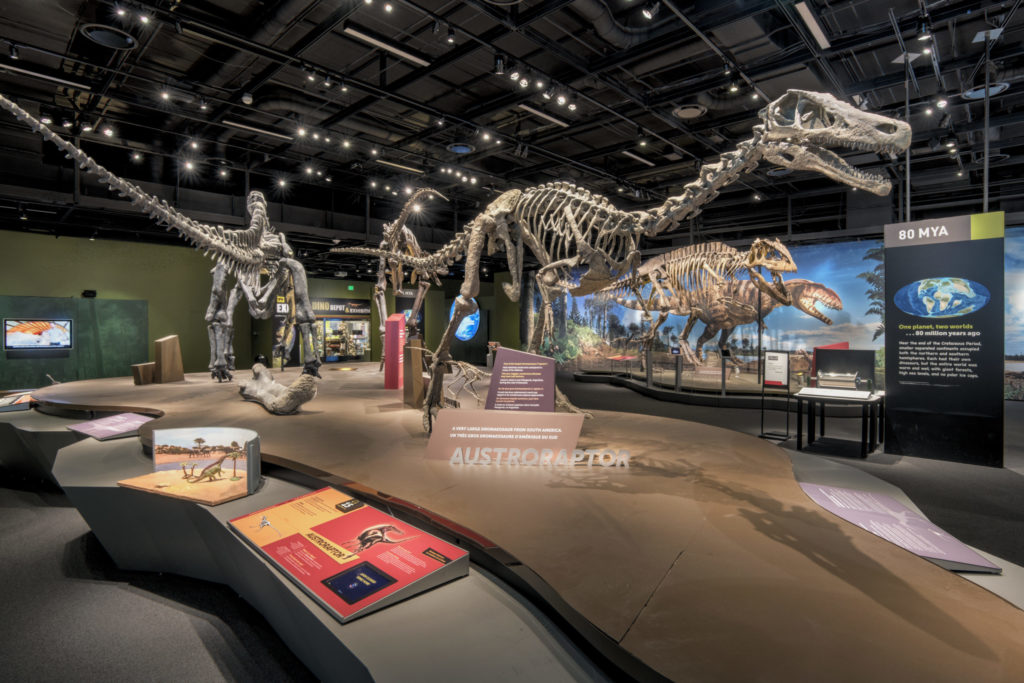 Discover full-size skeletons of rarely-seen dinosaurs from Africa, Madagascar, and South America at the Ultimate Dinosaurs blockbuster exhibit until Sep 5. 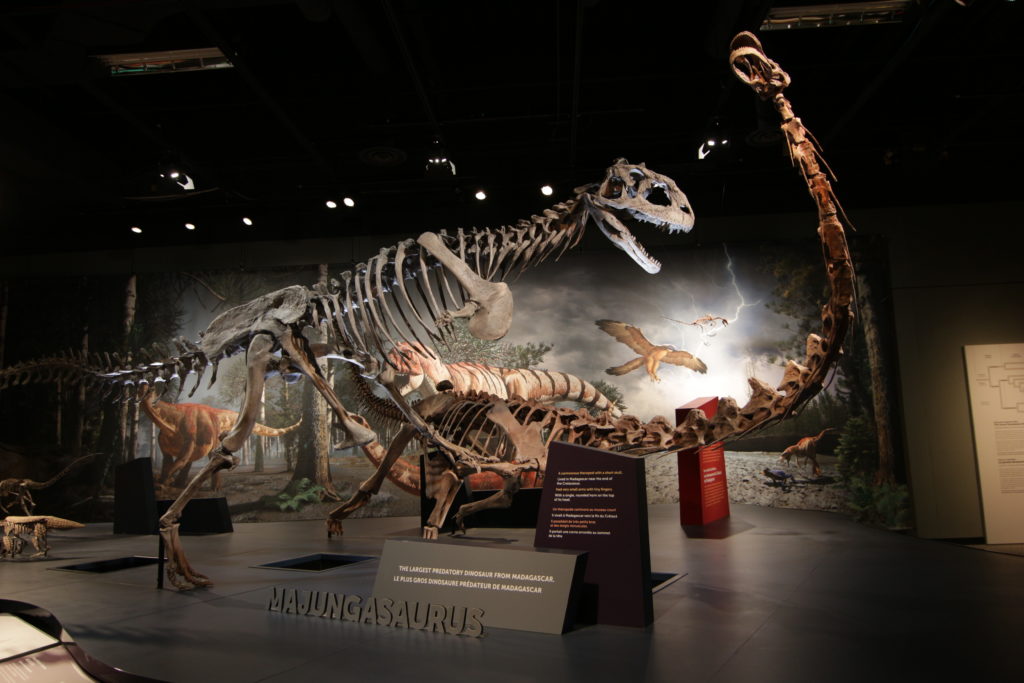 There are plenty of hands-on learning opportunities in the Ultimate Dinosaurs blockbuster exhibit.

The most likely source of iridium is an asteroid impact. Iridium is rare on Earth but quite common in asteroids. The 66-million-year-old rock layer is the “smoking gun” that proves the theory.

But what about the dinosaurs that DIDN’T go extinct?

By the time the asteroid hit, some dinosaurs were already evolving features like feathers. Even the mighty Tyrannosaurus rex might have had primitive feathers in spots. By the latter part of the age of dinosaurs, flying reptiles were common.

That’s right, every bird we see today has evolved from dinosaurs, and many bear a striking family resemblance to raptors. So, a chicken is basically a super-evolved dinosaur. 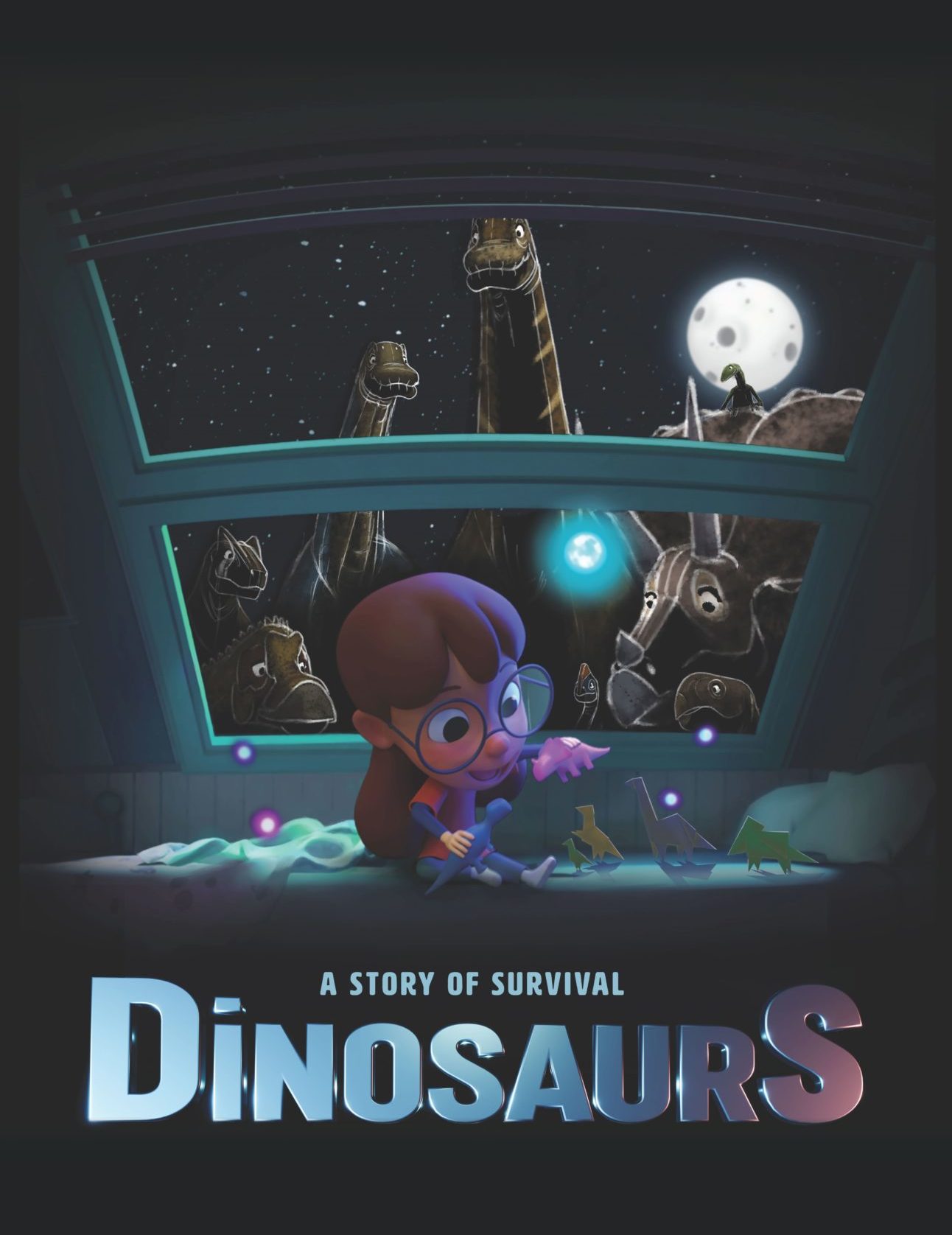 The Planetarium’s latest show for all ages, Dinosaurs: A Story of Survival, introduces a young girl who loves dinosaurs. She travels back to the age of dinosaurs and discovers what they were like, what happened to them, and how dinosaur descendants are still with us. We see flirting T. rexes, thundering sauropods, and the exploits of other dinosaurs. We also witness the asteroid impact that marked the end of 150 million years of dinosaur dominance over the planet.

There’s something powerful about seeing a real dinosaur fossil or a starry sky from a dark location. There’s a sense of wonder and a connection to where we came from. It’s also a reminder that everything changes.

The dinosaurs didn’t see change coming. Luckily, humans have access to technology that allows us to monitor our planet’s vital signs and see the whole world from space to understand how everything is interconnected. We can forecast change and maybe even intervene to prevent disasters before they occur. Space technology is one of the tools we have to help ensure that humans don’t also go the way of the dinosaurs.