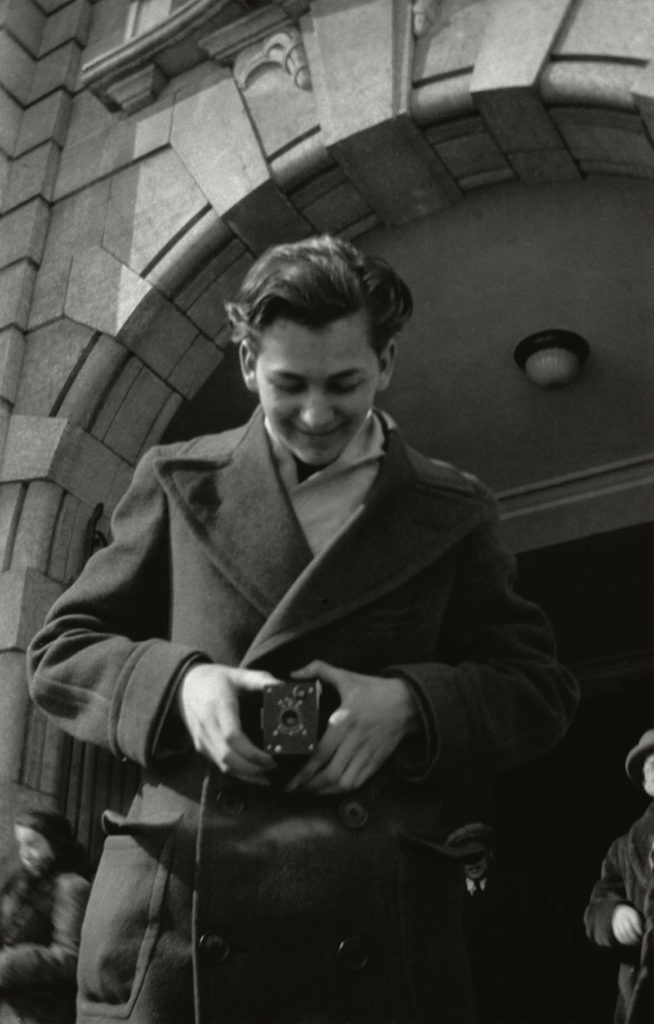 (Winnipeg, MB: March 1, 2022) Now open in the Discovery Room at the Manitoba Museum, The Lost Expressionist – Nick Yudell, A Photographer Discovered, is an exhibition of striking photographs that reveals a vibrant world in Manitoba of the 1930s. This stunning collection of images and artifacts, art directed and curated by Dr. Celia Rabinovitch in partnership with the Museum, will be on display until August 1.

Imagine opening a hidden cache of negatives shot before World War II by a young man from Morden, Manitoba who perished during that War. No one has seen these negatives since the youth closed the box that he made for his life’s work and enlisted with the RAF in 1940 to defend freedom. Enclosed is a vivid world captured by a young Jewish Canadian photographer from rural Manitoba during the Dirty Thirties. The photographer was Nick Yudell (1916-1943), an RAF pilot who perished in North Africa during World War II.

Nick Yudell’s dramatic photographs span the Jazz Age – when he was twelve and received a camera — and the Great Depression, bridging the 1920s through 1930s. His stunning black and white images make those times vivid and capture a world of glamour and grit. He depicted himself and others in striking portraits and anticipated avant-garde art with double exposures and experimental lighting. Celia Rabinovitch uncovers the development of Yudell’s personality through his introspective self-portraits and themes of play, place, portraiture, and inventive photography. “The photographs of Nick Yudell capture not only a fascinating era in prairie history, but the burgeoning talents of a young artist exploring the possibilities of expression in photography,” notes Dr. Roland Sawatzky, Curator of History, Manitoba Museum. Playful in a perilous time, Nick’s images are a soaring vision later lost at war. A major discovery, The Lost Expressionist will engage and astonish visitors.

Nick organized his images into an archive preserved by his cousin Milton Rabinovitch (1909-2001). Celia Rabinovitch created The Lost Expressionist to recognize Nick’s artistic vision and the various communities he touched. Nick Yudell is a lost artist whose images have been brought to life.

“The Lost Expressionist offers a prism of a young man’s life, showing how each person is rich and complex. Nick’s portraits and images of daily life express the facets of an individual life, sacrificed defending freedom in World War II,” says Dr. Celia Rabinovitch, Art Director and Curator.

To learn more about The Lost Expressionist, see the Manitoba Museum exhibition website ManitobaMuseum.ca and the project website at lostexpressionist.com

Praise for The Lost Expressionist

The work that Celia has done through her passionate attention, bringing the past into our time, reminds us of the complex tissue of existence and the balance between here and now, us and ‘them.’
Ihor Holubizky, Art & Social Historian

Moments of everyday life that reflect a particular time and place can transport us to speak to present-day circumstances and sensibilities. Celia Rabinovitch does great justice to the spirit, intent, creativity, and world of Nick Yudell. These marvelous photographs make a dialogue possible in which the past becomes a vehicle for understanding our present and perhaps provides insight into what lies ahead.
Stanislao Carbone, Director of Programs & Exhibits, Jewish Heritage Centre of Western Canada

The Lost Expressionist brings to life a powerful story with images by a photographer born a century ago, in 1916. I was immediately drawn into the daily life of people, who cannot realize, as we do in hindsight, the enormity of world events that were unfolding around them. Nick Yudell recalls the art of Atget or Vivian Maier, unknown in their lifetime, but whose hidden works were discovered and recognized by other creative artists.
Mary Phelan, Artist & Professor, University of the Arts, Philadelphia

These are stunning images. Celia’s detective work brings this “lost expressionist” and breathtaking archive to the world. Nick Yudell is an emerging talent in rural Canada who uses his camera in ways that anticipate our contemporary visual culture of the “selfie” and, although geographically at a great distance, his work parallels avant-garde European artists of the early 20th century with his experimental and often surreal photographs.”
Sue Johnson, Artist & Professor of Art, Department of Art and Art History, St. Mary’s College of Maryland

These images are exceptional, stunning when one considers how young Yudell was. Although this exhibition tells the tale of a single man, it represents the efforts of many others like Nick Yudell who contributed to winning the Second World War—an important narrative for all to remember. It is a unique and important contribution to a segment of Jewish life and history that has received little attention, and to prairie and Canadian history during the Depression and World War II.
Dr. Shelley Sweeney, Archivist & Former Head of the University of Manitoba Archives and Special Collections