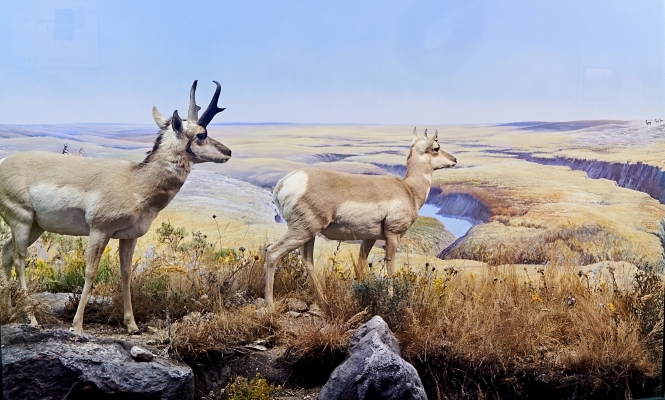 The Museum opened our newly renovated Prairie Gallery just last spring with spectacular new exhibits on the intriguing and engaging natural and human history of southern Manitoba. The addition of ground squirrels and their burrows, a riverbank bison bone bed, a homesteader stone house, an old school room, and hundreds of new specimens and artifacts, along with life-sized animations, prairie soundscapes, and feature videos provide exciting immersive experiences.

But some things from the old ‘Grasslands Gallery’ didn’t need changing, only a facelift. The pronghorn diorama at the gallery’s entrance remains as awesome and as valuable an educational tool as it did when it opened over 50 years ago in the summer of 1970, when it caught the eye of our first official visitors, Prince Philip and Queen Elizabeth:

The Prince asked a good question – pronghorn were frequently seen in the province prior to 1880, but are now only rare visitors wandering from North Dakota or perhaps Saskatchewan. But this is just one of hundreds of good questions that the diorama can illicit and help answer.

The diorama was designed, its backdrop painted, and installation overseen by renowned Manitoba artist Clarence Tillenius. He began planning in August 1968 and completed it, along with the bison diorama (much longer in production, from 1963), in June of 1970. As has remained the tradition for our dioramas to ensure authenticity, Tillenius visited the site that is portrayed, driving with other Museum personnel north of the U.S. border “to a point south of Waskada from where I [Tillenius] painted a study of the west end of the Turtle Mountains [sic] which appear in the background landscape.” (From a June 12 1970 letter to Dr. F.A.L. Matheson, then-president of the Museum.)

A rough plan for the diorama as envisaged by Tillenius. The basic size and shape was maintained, but only two actual pronghorn, a male and female, were in the final exhibit with a herd painted into the backdrop.

The pronghorn diorama effectively introduces the new Prairies Gallery much the way it introduced the original Grasslands Gallery, except for the new vibrant panels and its reinterpretation in a modern context. But it still shows the southwestern part of the Manitoba as it was before colonization, providing an opportunity to think about the transformation of our prairies over the last 250 years. The pronghorn diorama might be the closest some of our visitors ever get to experiencing original prairie in three dimensions. They can wonder at its expanse, its wildlife, and ponder its future. And it will do so for the next 50 years, or more we hope, perhaps inspiring the next generation of nature-conscious Manitobans to save our last vestiges of wild grasslands and their inhabitants.

The pronghorn diorama with new interpretation. Even after over 50 years, it inspires wonder and empathy.© Manitoba Museum

Enduring – according to the dictionary – means having a validity that does not change or diminish. The pronghorn diorama, and the Museum’s many other signature life-size dioramas (bison, polar bear, caribou, moose, wolf den, elk, bat cave, snake den, Delta Marsh, Winnipeg 1919, and Nonsuch) are prime examples of enduring, undiminished wonder, exploration, and inspiration.

Come see for yourself!