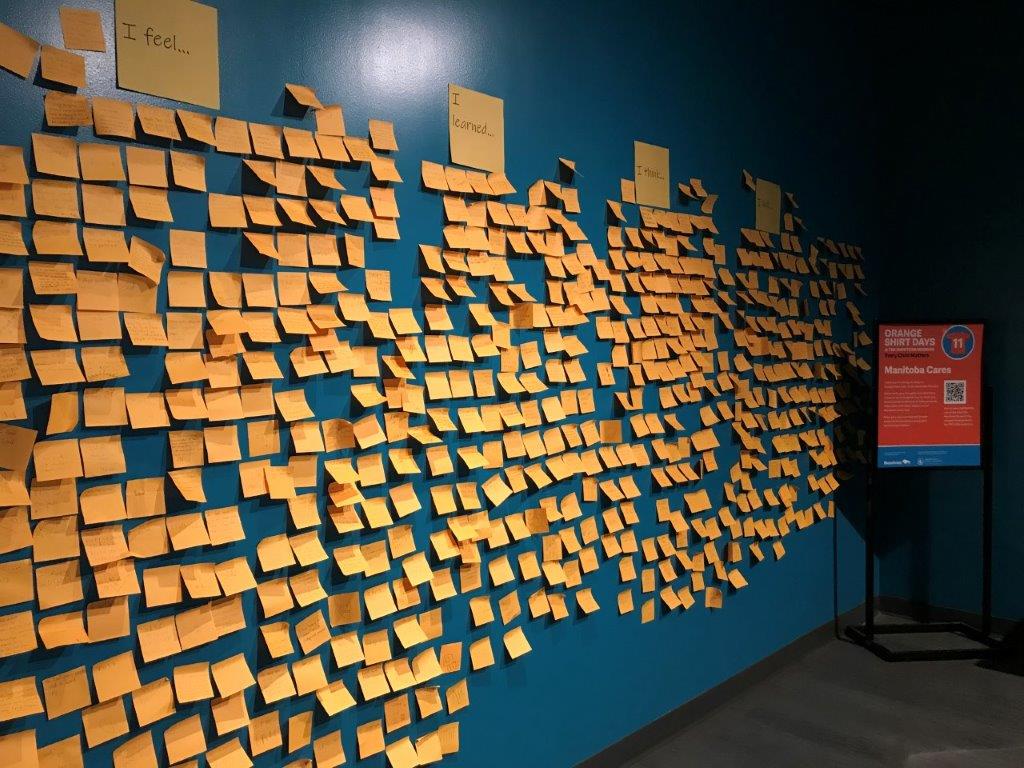 The wall pictured above says so much. It speaks of hope, regret, learning, remorse, sadness, anger, community, the future, and love. Once the halls fell quiet, I went down to see it, the Manitoba Cares wall. Here, Manitobans shared whatever was in their hearts after their journey through the Manitoba Museum’s National Day for Truth and Reconciliation special programming. Their words took my breath away.

I read many of the notes, some clearly written by small children about how they were feeling after learning more about Indian Residential Schools. Their tiny, yet powerful words, brought tears to my eyes. So many wrote the words “Every Child Matters,” some drew pictures of faces, and some of homes. The word “sad” appeared dozens of times. I don’t imagine many of us as parents wanting to bring sadness into our children’s lives, and yet you came here to learn and to reflect, knowing the stories of Survivors would be difficult to hear. Thank you for taking this important step. Speaking to our children about Indian Residential Schools is so important, no matter how difficult it may be. I remember someone once saying, “if children lived through it, children need to learn about it:” this is something I have always believed to be true, something that tested me not long ago.

This past June, as the daily news shared stories of unmarked graves, the painful truths of Residential School Survivors came to the awareness of some non-Indigenous Canadians. Our family, like many, listened with heavy hearts. The “discoveries,” as they were referred to early on, were far from the first time Indigenous communities had told their horrific stories. For decades Indian Residential School Survivors had been speaking into the void, testifying in commissions, sharing oral histories, submitting documents to archives, often struggling against the “forgetting” of some who have denied the truth. This past summer however, the conversations grew louder, not just within the chambers of governments or the boardrooms of companies, but also at the kitchen tables of families. Families of settlers, new and old.

Ours was one such family, and although we had spoken about Indian Residential Schools with the kids before, because of Orange Shirt Day, we hadn’t had to answer the kids’ pointed questions about what really happened and why.

Below, I’d like to share with you a bit of a conversation which unfolded one morning in our home back in June. I was reminded of it looking at the wall, the commitments to learn and to remember. I will admit I struggled to find the words to be both honest and age-appropriate in my answers, but I did not avoid it. I understood as I have the honour of living in this beautiful and complicated place, that I have the responsibility as a Treaty person to amplify and illuminate truth in all my actions and at every step; starting at home.

“Who killed the kids?” came my nine-year-old daughter’s voice from the dinette table. I looked up from the dishes I was washing.

“What? Who killed which kids honey?” I hadn’t realized she was listening to the radio, news about the graves found at former Indian Residential Schools. I quickly put down the washcloth and turned down the volume.

“They’re talking about graves at schools mama, with kids in them.” Her voice cracked a bit.

I hadn’t considered that she would be listening, busy with her breakfast and getting ready for online learning. But it was clear she had, and she heard every word. Her eyes were confused and afraid.

I walked over slowly, my mind racing, considering what to say. Thankfully I had read some articles about how to talk to kids about Indian Residential Schools, but still I felt ill-prepared. I sat down and folded my hands into one another. Just then, her six-year-old sister poked her head around the corner. She too had been listening, she too wanted to hear my answers. Climbing onto a stool beside her sister, they looked at me as I gathered my thoughts.

I honestly didn’t know where to begin, but I knew that they deserved the truth and they deserved it in a way that recognized they were children, both deeply empathetic and impressionable. I also knew from my previous work that vicarious trauma was possible; how could I ever respond in a way that protected them while honouring the truth?

“Yes, in many places across Canada there are old schools and there are graves.”

“Did someone hurt the kids?”

“Yes, many, many kids were hurt and many died.”

“But why? Why would someone hurt little kids?” I took a deep breath. Why? I didn’t know why, I mean, I knew but I couldn’t make sense of it in my heart or mind either. What was I to say?

“Well, you know who Indigenous Peoples are, right?”

“So, they are the First Peoples of this land, living here for many, many years. Thousands of years. Your Appa and I, we are not from this land. We came here from other countries and then this became our home.”

“Many people in Canada came from other countries, maybe not they themselves, but their parents, or their grandparents, or someone from their family a long time ago. But no matter how long ago, they were new, settlers. They came to settle. Indigenous Peoples can trace back their families to the beginning of when people were on this land. But some of the people who came decided they were better than the Indigenous Peoples; they thought their language was better; their way of living was better. But we know everyone is different right, not better, different?”

“I am. I came from Poland, and in my home, we spoke Polish to our parents, and I got to learn Polish dancing, and how to make Polish food, and it was different than many other people’s homes, but it was still wonderful. Not better or worse.’

‘And now, you speak some Polish and you speak some Tamil from Appa, and no one is trying to change us. But when the Indigenous kids were taken from their parents, little like you, people tried to force them to change. And it was wrong and awful and they hurt many of the kids.”

“Yes, many died. But their families didn’t forget them. They’ve been searching for them so they could bring them home.”

We went on to talk about the Indian Residential Schools for quite a while, hugging each other, crying. It was frightening for them to hear that strangers came into homes and took kids away, and that kids were gone for years, and that they were terribly lonely and very sad. I was careful not to use words that would traumatize my children, but I was also careful not to make it seem like this happened a long time ago, or that what happened was in any way acceptable. I told them that sometimes the adults were mean and sometimes they were very unkind. At six and nine years old my daughters understood what had happened in a way children understand things; imagining kids like themselves ripped away from their parents, from their lives, and from love.

Last week, on the first National Day for Truth and Reconciliation, we talked about Indian Residential Schools in our home again. We listened to the drumming at St. John’s Park, we learned as a family, we also learned as a community, and as a nation.

It is a profound responsibility to bear witness to the truth and then to act according to it. Speaking as a non-Indigenous Canadian, I’ve committed to that responsibility in all the ways that I can, including writing to you.

If you have yet to have these conversations with your little ones, I understand your trepidation. It won’t be easy, but there is a lot you can do to prepare yourself. Learn, reflect, and then begin. Here are some suggested starting points (there are many more, this is by no means an exhaustive list) …

Whatever actions you took on September 30, and you continue to take every day, I hope they bring you closer to the truth, closer to the stories of Indian Residential School Survivors, and closer to understanding not only the past but also the present. Truth comes before reconciliation and because the truth of Indian Residential Schools reaches hundreds of years back into history, the truth of their legacy and ongoing impact will be part of the lives of generations to come.

Thank you to the 3,584 Manitobans who honoured the first National Day for Truth and Reconciliation by taking part in Orange Shirt Days at the Manitoba Museum; your presence here was so important. The National Centre for Truth and Reconciliation, the Province of Manitoba, many other partners, and the Museum, hope that what you saw, heard, and felt will remain with you, always.

And lastly, thank you to the thousands of Manitobans who honoured the children who never came home and those that did by walking through our community in a wave of orange on September 30. Your actions showed that we are committed to taking this journey together. 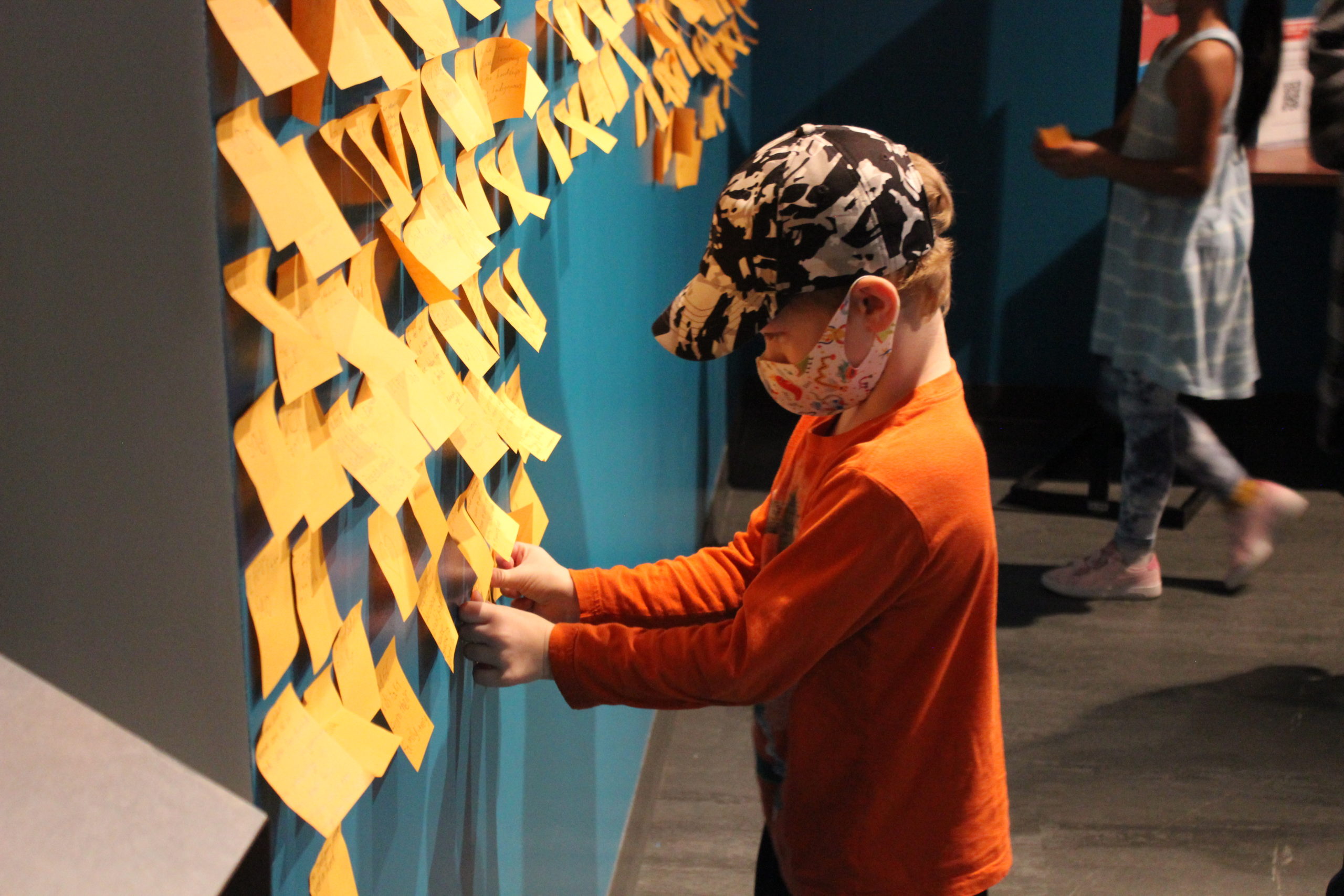 If you or anyone with you is experiencing distress as a result of this content or pain from a residential school experience, we encourage you to take the time to care for your mental and emotional well-being.

The National Indian Residential School Crisis Line is available 24 hours a day at 1-866-925-4419 and offers emotional and crisis referral services.

The Manitoba Museum acknowledges we are located on Treaty No.1 land, the ancestral lands of the Anishinaabeg and Ininíwak. These lands are the unceded territories of the Dakota, and the homeland of the Métis Nation. The Museum is committed to reflecting the continued legacy of all the original peoples of this province, including the Ithiniwak, Denesułine, Anishininiwak, Inuit, and Nakota. The Museum acknowledges the harms of the past, is committed to improving relationships in the spirit of reconciliation, and appreciates the opportunity to live and learn on these traditional lands in mutual respect.