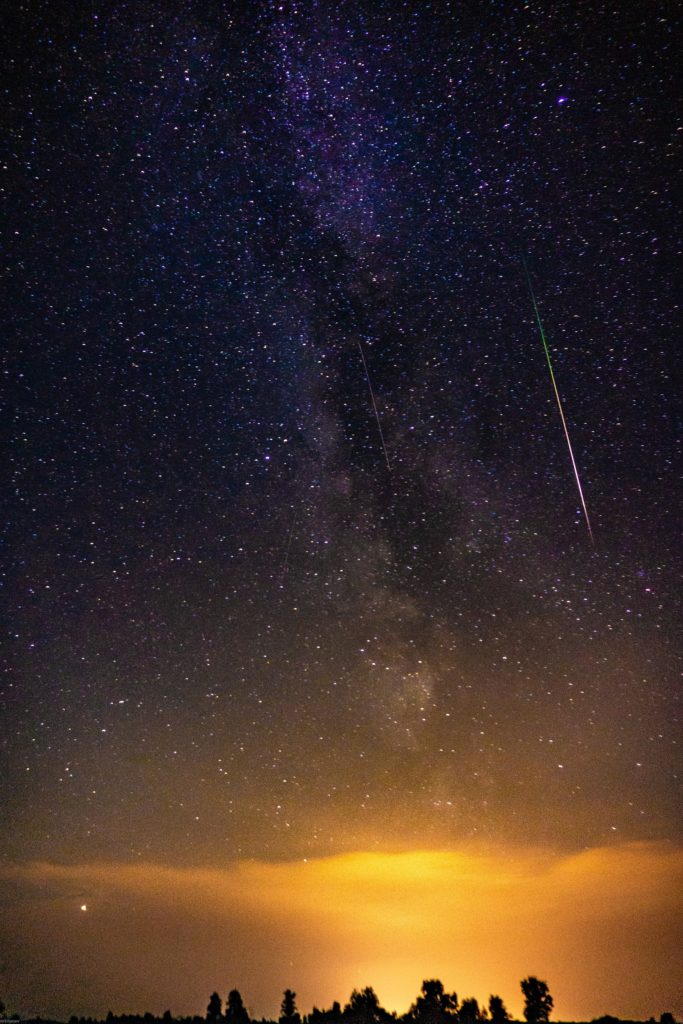 August brings the Perseids meteor shower, an annual event that gets many people looking skyward. In recent years, social media has been hyping (and sometimes overhyping) celestial events, since they tend to generate a lot of interest (and thus “clicks”, “likes”, and “shares”), so it can be hard to know what you can actually expect to see. Here is the Manitoba Museum Planetarium’s guide to the 2021 Perseids meteor shower.

A meteor is the formal name for a “shooting star” or “falling star” – it’s a streak of light that flashes across the night sky. They happen when a tiny piece of dust or grain of sand from space crashes into the earth’s atmosphere at thousands of kilometers an hour. The speed of the dust particle gets turned into heat and light energy, and creates the visible flash we see. The piece of dust is totally vaporized while still high up in the atmosphere dozens of kilometers above Earth’s surface.

This actually happens all the time, but most of us don’t notice. If you went out on a dark, moonless night you’d probably see a half-dozen metros per hour if you watched the sky continuously. But they only appear for a second and they’re gone – so look down at the wrong time and you’ll miss them.

The source of this dust is perhaps surprising – it’s leftover material from the formation of the planets. There’s dust spread throughout the solar system, each piece in orbit around the sun like a tiny planet. The earth as it orbits the sun sweeps up some of this dust, and each one becomes a meteor.

Several times a year, though, the earth goes through an extra-thick area of dust – like a cosmic dust bunny. These dust bunnies are left behind by comets – “dirty snowballs” a few kilometers across that orbit the sun in oval-shaped orbits. When comets get close to the sun, the snow melts and leaves the dust behind in a trail. If that trail happens to cross the orbit of the earth, we will see a meteor shower every year on that date.

The Perseids meteor shower is probably the best-known meteor shower (although it’s not the best one of the year) because it happens during summer vacation time for the northern hemisphere. Its peak is around August 12th each year, although the date varies by a day or so. The Perseids are dust left behind by Comet Swift-Tuttle, which loops around the sun every 133 years or so. The meteor shower is named after the constellation that the meteors seem to come from – the constellation Perseus.

How and When to Look

The best way to see meteors is to get outside the lights of the city. Some of the meteors will be faint, and so you will miss them if the sky is too bright from nearby streetlights, houses, or other sources of illumination. A park or parking lot outside the city is a good place to head. This year, the light from the Moon will not interfere either because the moon will set in early evening, so this is probably one of the better years to see the Perseids.

Meteor showers are the ultimate in low-tech observing. Take a blanket or reclining lawn chair along, and set up with your feet pointed away from any nearby lights or light pollution. (For southern Manitobans, this generally means putting your back to Winnipeg’s lights.) You don’t need binoculars or a telescope – you want to be able to see as much sky at once as you can, since the meteors can appear anywhere in the sky. A telescope would just narrow your view too much.

Turn off your phone – the light from a mobile device will ruin your eyes’ ability to see faint stars and meteors. Even a quick glance will make it hard to see for a few minutes, so resist the inclination to check the web. Spend the time with the stars instead.

As for when the look – it depends on what you want to see. If you go out before midnight, you will see only a few meteors, but the ones you do see will probably be big bright ones. If you want to see lots of meteors, you want to watch from about 2am to dawn on the morning of the 12th. In the run-up before dawn, your part of the earth is heading straight into the trail of dust, and you’ll see the most meteors.

This is why some people have been disappointed by meteors showers (in addition to the social media hype). Meteor showers have a slow fade-in period of a few weeks, then a peak that might only last a few hours, followed by a slow fade-out. On the night before or after the peak, meteor rates are often less than half of what the peak is, and the rate drops quickly as you get farther from the peak.

This year, the Perseids are definitely worth the drive out of town for the peak. I plan to be out from dark on the 11th until dawn on the 12th with our all-sky camera system to record what we can. Follow the Manitoba Museum on social media for updates and live broadcasts during the meteor shower (weather permitting).

While you’re out counting meteors, there are lots of other sights to see: constellations, planets, satellites, and the year’s best views of the Milky Way. Visit the planetarium in person to see The Sky Tonight, a live sky tour, to learn more (showtimes here). You can also check the Manitoba Museum’s Manitoba Skies page for current night sky information.