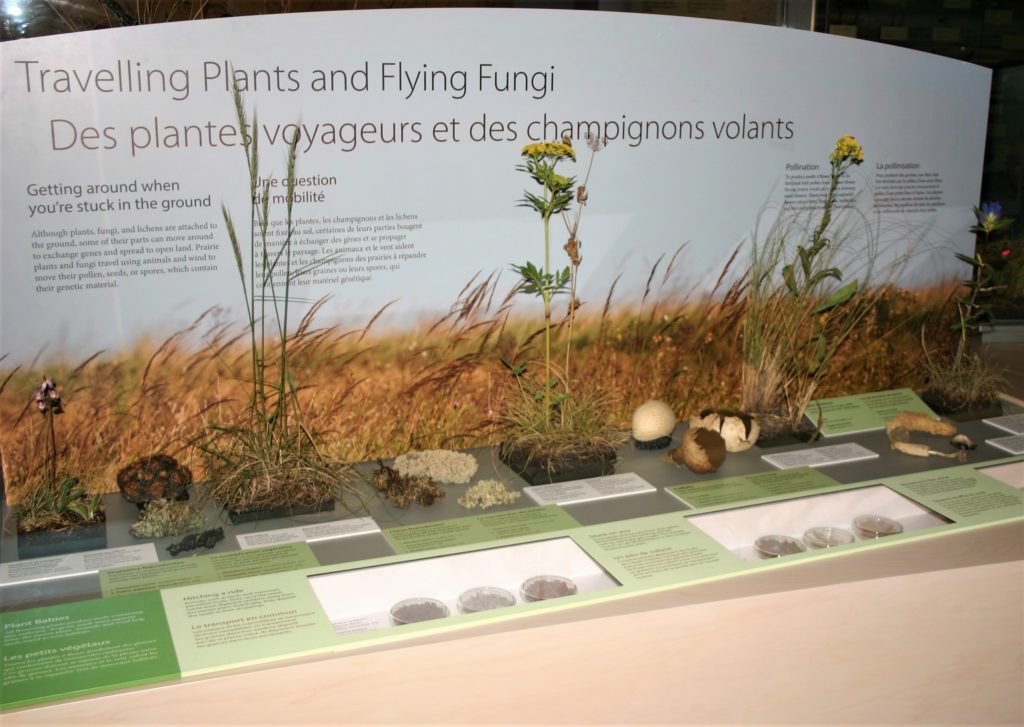 Plants and fungi were challenging organisms to include in our new Prairies Gallery because most of our 50,000+ Museum specimens are preserved in a flattened, dehydrated condition. Not very attractive! Further, because these organisms don’t move the way animals do, people don’t seem to find them interesting. But are they really the passive, immobile creatures that we think they are? Our new exhibit case called Travelling Plants and Flying Fungi, attempts to dispel this notion. 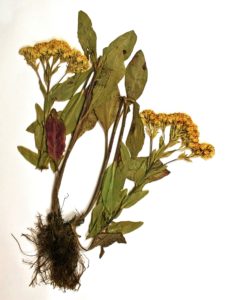 Most Museum specimens are dried and flattened, like this Stiff Goldenrod (Solidago rigida) plant.

The fact of the matter is, plants and fungi need to be able to move, otherwise they would never have colonized land! However, it is not the adults that do the actual moving; it is their gametes (pollen) and offspring (seeds). Before a plant can make seeds, it has to have its eggs fertilized by pollen grains from another plant. Since a plant can’t just get up and walk to another plant to give it some pollen, they have to use wind or animals, called pollinators, as couriers. To depict this process, the new Museum case includes intricate 3-D models of a wind-pollinated grass and four animal-pollinated flowers, as well as their pollinators, instead of flattened plants.

Before the final graphics were chosen, the layout of the case needed to be tested.

The plant models were created by the Museum’s talented Diorama & Collections Technician. Two of the models are real plants that were “mummified”, and then painted to look alive. The other three are entirely artificial. To make them, a plant was collected, and then molds made of the parts. These molds were used to create fake leaves, stems, flowers and fruits, which were then assembled together and painted. 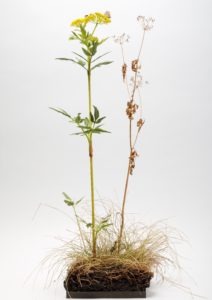 The Golden Alexanders (Zizia aurea) model has two pollinators on it: a beetle and a butterfly.

Once a plant is pollinated, seeds, protected inside fruits, develop. Seeds also need to disperse, and, once again, wind and animals are the couriers. To illustrate the different methods of dispersal, various seeds and fruits from the Museum’s collection were selected for display.

Inset cases display various kinds of fruits and seeds. These species have hooked burs that catch onto animal fur.

Some plants, fungi and lichens do not produce multi-celled seeds; they produce tiny, single-celled structures called spores. Since they are so small, they typically disperse very well in the wind. Specimens of several common prairie spore-producers, including fungi and club-moss, are displayed in between the plant models. 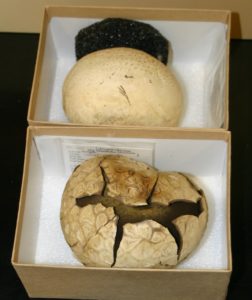 Manitoba prairies have many fascinating plants, fungi and lichens in them. How they survive and reproduce is now one of the stories we tell in the Museum. My only regret is that we couldn’t include more species in the gallery. Hopefully, this new case will inspire our visitors to spend more time paying attention to, and appreciating, the plants in our wild prairies.