A plaque featuring a fragment of the marble base of the Memorial of the Fallen in Afghanistan was presented to The Manitoba Museum in April by the Commanding Officer of the Winnipeg Infantry Tactical Grouping (Royal Winnipeg Rifles and Queen’s Own Cameron Highlanders). It will be on display in the museum’s foyer from November 9 to November 30. 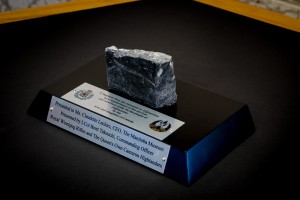 The original memorial was erected at Kandahar Airfield, Afghanistan in 2006 and grew in symbolic importance over time as it evolved with the pace of operations. At the end of the Canadian combat operations, in June 2011, it contained plaques honouring all of the fallen in the Afghan theatre of Operations, including:

Members of the Canadian Government; and

One member of the Canadian Press Corps.

It was a living memorial that changed and expanded, and when families of the fallen started to visit Kandahar Airfield in 2009 for Remembrance Day, this cenotaph was a focal point of the ceremonies. 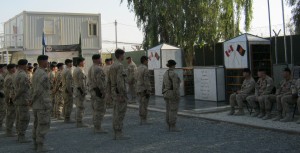 Memorial of the Fallen, Kandahar Airfield

The Memorial of the Fallen has attained national significance, and in early December, 2011, it was repatriated to Canada. It is scheduled to be unveiled in its new permanent home in Ottawa in 2014.

Lieutenant Colonel B.W. Takeuchi wrote in a letter to the museum, “This simple piece [of the cenotaph] represents the essence of Canada’s effort and sacrifice in maintaining world peace and helping the citizens of Afghanistan.”