The Manitoba Museum was built in the late 1960s, occupying the site of the former Strathcona Hotel, built in 1905 on the south-east corner of Main St. and Rupert Ave. This intersection featured a hotel on three corners, all built in the first decade of the 1900s to house a massive influx of settlers, new urban workers and would-be entrepreneurs. The Strathcona was also the scene of labour resistance during the 1919 Winnipeg Strike. 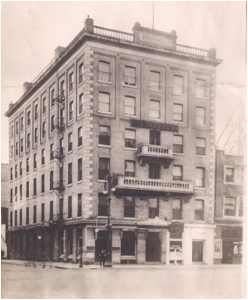 Jacob and Rachael Rosenthal and their infant son moved to Canada from Russia in 1891. They settled in Manitoba and took part in the life of the local Jewish community. By 1898 Jacob was running a small general store in the North End. Eventually he also sold cattle, and started a clothing store. Jacob must have done fairly well, because he was able to build and own the 6-storey, 100 room Strathcona Hotel, which opened on November 9, 1905. In the next eight years the population of Winnipeg doubled to 150,000, and business was booming.  This changed abruptly in 1916 with the passing of prohibition: the bar was the most profitable part of the hotel, and Jacob also ran a wholesale liquor sales business.

One of the most notable events to take place in the hotel was the occupation by the Labour Café during the Winnipeg General Strike of 1919. Women were a driving force in the strike movement. Lacking wages and with the city paralyzed, it was difficult to find food for all the female strikers, who at the best of times were eating cheap meals at small cafés and restaurants. The Women’s Labour League organized the Labour Café in the Strathcona Hotel, which the Rosenthals allowed and supported. For twenty-two days, over 1200 free meals a day were given to women and a discount was provided for rooms. Men were also welcome to eat at the Labour Café, either by payment or with a ticket provided by the Relief Committee. After this period the Rosenthals politely asked the Labour Café to leave the premises, probably due to the new presence of “Special Constables” (riot police) in the Police Station next door, which would have increased tensions and the potential for violence.

While The Manitoba Museum currently occupies the site of the former Strathcona Hotel, it also stands on the site where strikers occupied the hotel in an act of organized resistance. 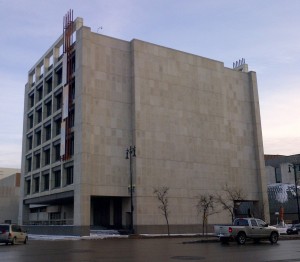 The Manitoba Museum, 2013, viewed from the same angle as the Strathcona Hotel photograph.