A museum exists to share artefacts, not hide them. Artefact loans are therefore a crucial part of any museum’s activities. The Manitoba Museum and the Canadian Museum for Human Rights (CMHR) have recently agreed to work together when it makes sense to join forces. 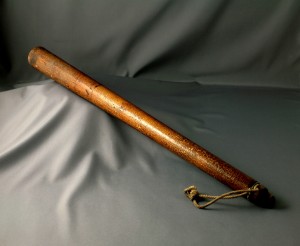 Our first “handshake” was the loan of some of our artefacts related to the Winnipeg General Strike of 1919 to the CMHR. Some of you may have seen this on television recently: there were speeches, photo-ops, and the media’s flare for cool optics. But behind the scenes, there were some serious discussions about which objects were best suited to tell the story of labour rights in Canada, not to mention the safety of display conditions (could the artefacts be harmed by too much light or moisture?) , the period of the loan (two years), and so on.

The police club is a potent symbol of the Winnipeg General Strike, and in particular it is symbolic of the people that feared and opposed labour unrest. The club pictured here was used for crowd control by a “Special Constable” during the strike.  On May 15, 1919, 30,000 Winnipeggers supported a local metal-trades union strike by walking off the job, thus beginning the largest labour resistance movement in Canada. It lasted six weeks, but on June 26, 1919 the resistance was ended violently by police forces.

The forces were not made up of actual Winnipeg police however, since they in fact supported the strike and were relieved of their duties by the Police Commission. The forces involved in Bloody Saturday were made up of “Special Constables” (citizens deputized by the mayor), and the Royal Northwest Mounted Police. The “Specials”, as they were known, were mostly young men identified by badges and armbands. They wielded clubs, like the one pictured here, for crowd control. The Special Constables were paid three times more than police officers from funds provided by the Citizens Committee of One Thousand, a group of Winnipeg elite who opposed the strike.