I was recently asked to attend a conference and weekend festival in Poland regarding historic landscapes in the Vistula River valley. One of the newer public interests in the area happens to be Mennonite history: Mennonites arrived in Poland in the mid-16th century from the Netherlands region and established thriving communities that existed until 1945, when they fled the Soviet advances at the end of Wolrd War II.

One of my research interests is Mennonite domestic architecture. I was taken to a house built in 1770 in the village of Chrystkowo (formerly Christefelde) . Two things surprised me: how similar the arrangement of rooms was to Mennonite housebarns I had seen in Manitoba (all built after 1874); and how gigantic these homes could be! Although I had studied  Mennonite architecture in Poland on paper, there’s nothing like seeing it in person. After all, that’s why museums are so great – they allow us to see the real objects of history, whose very existence takes us to another level of experience. 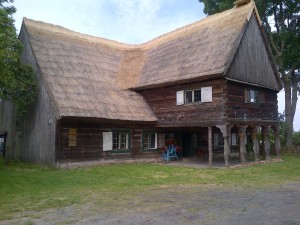