A glass cane and a search for family 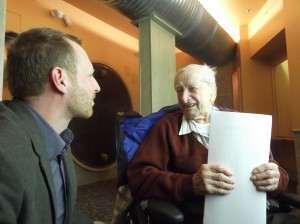 This last weekend The Manitoba Museum had a very special guest. Joseph Winzoski arrived on Saturday afternoon with family and friends to have a look at a special artefact his grandfather had made back in about 1910. Joseph’s grandfather, Juszef Wiazowski, was a master glass blower at the Manitoba Glass Works in Beausejour, and created this glass cane there. Referred to sometimes as “whimsies”, these kinds of decorative pieces could be made as gifts or for sale.  Juszef was recruited in Poland by Josef Albert Keilbach to help start up the factory work in 1906.

Joseph Winsozki’s granddaughter has provided the museum with some of her detailed research of the family history:

“Juszef Wiazowski was a part owner of a Glass Company in Poland. This…was discovered in the Archives of Poland by a distant cousin in 2012.”

“It is my belief that [Josef] Albert Keilbach visited with Mr. Juszef Wiazowski at his glass manufacturing plant in Lodz, Poland and recruited him as a partner in the Manitoba Glassworks.” 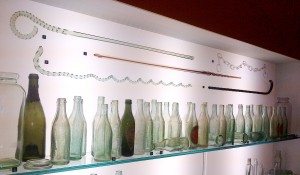 Glass cane (top)believed to have been made by Jozef Winzoski, ca. 1910. On display in the Parklands/Mixed Woods Gallery.

Juszef’s son Adam was also a glass blower at the factory, and his son Joseph, our visitor, was born in 1916. Joseph never really knew his father. Both of Joseph’s parents died of the Spanish Flu, a world-wide epidemic, in 1918, and around the same time his grandfather Juszef was kicked by a horse and killed. Joseph had a difficult childhood: he and his siblings were forced by their step-family to work on farms all over Manitoba.  Joseph later served in the Netherlands, fighting in the Liberation of Arnhem, and was later a guard for the war criminal Kurt Meyer in Aurich, Germany.  As an orphan, Joseph was always interested in reconnecting to his father’s family history, and this glass cane, and the Winzoski’s of Beausejour, were a big part of that story. Thanks for the visit, Joe.