Slovakian textiles recently donated to The Manitoba Museum help tell the story of one family’s immigration to Manitoba in the late 1940s. These textiles were made in the tiny village of Lentvora, in a small valley in central Slovakia. The Karman family grew their own flax, which was then beaten, spun, dyed and finally woven into these textile patterns. The donor of the textiles, Anne Anderson, was a child in the village in the early 1940s, and remembers her mother Anna and her mothers’ relatives gathering in the kitchen/dining room around a loom to do some weaving.

Anna, the donor’s mother, lived with her grandmother in this house after Anna’s husband Pavel died in 1945. As he lay dying, Pavel asked his cousin Andrew to take care of his daughter. A few years later Anna received word from Andrew, who had immigrated to Canada and lived in Dugald, Manitoba. His young wife had died, and he asked Anna and her daughter to join him on his farm. On the train to Winnipeg in 1948, in possession of these textiles, Anna pointed to a fine house she would like to one day live in. It turns out that was the house of her future husband, Andrew.

Mrs. Anderson held on to these textiles for years before donating them to museum this summer, because they told her mother’s story and they reminded her of life back in Slovakia, where the family worked together to produce what they needed. Now this story will endure at The Manitoba Museum. 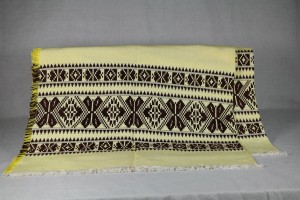