In our new exhibit, “The Selkirk Settlement: 200 Years”, we feature a violin with a unique and travelled history. It was made around 1800 in London, England, in the shop of John Betts. Pierre Bruce, a Scottish man who joined Selkirk’s colony acquired it (probably in Scotland) and brought the violin with him when he settled in Red River in 1815. Pierre was the “unofficial dance master” of the Red River, leading music and dancing at local festivities.  The violin was handed down through successive Bruce generations, until it was donated to The Manitoba Museum in 1991 by the Bruce family.

The Selkirk Settlement was the brainchild of the Earl of Selkirk, who wanted to re-settle dispossessed Scottish farmers in North America. He was granted a large portion of Hudson Bay Company land holdings in 1811 known as “Assiniboia”, and planned to ship settlers to the Red River area to begin a colony of farmers. However, the people who already lived in the region were not consulted about this development, and for the first ten years of the Selkirk Settlement, political conflict was even more disruptive than the initial disastrous attempts at farming. The Red River area was inhabited by Assiniboine, Métis, and Ojibwe people, as well as HBC and North West company traders, all of whom had their own interests, alliances and conflicts. Nevertheless, the various groups did eventually co-exist peacefully (well, at least until 1870). I like to think that perhaps the dances led by Pierre Bruce and his fiddle went some way to bringing people together.

About the violin: The violin was made between 1795 and 1805 by the John Betts shop, Royal Exchange, London, England. The back is formed of two pieces of maple, quarter cut, and the interior ribs and scroll are also maple. The front is made of two pieces of spruce. The varnish is golden orange-brown in colour over a pale brown ground.  The violin was repaired in 1910 by renowned Scottish violin maker John Smith (1859-1941), who was at the time living and working at 617 Furby St., Winnipeg. 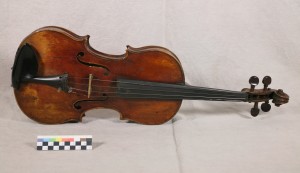 The Pierre Bruce Violin, circa 1800