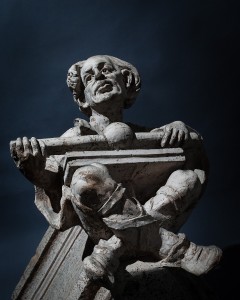 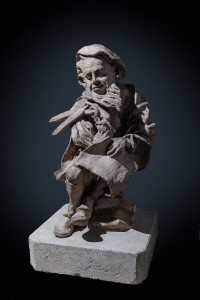 “Gargoyle” is a popular term for whimsical statues of odd looking beings attached to the top of old buildings. The museum was offered a gargoyle in 2011 that originated in Winnipeg, and after some further research I found that we had another gargoyle from the same structure, the Tribune Building. The Winnipeg Tribune was an influential city newspaper that was founded in 1890 and closed in 1980. In 1913 a new building for the newspaper company was constructed at 257 Smith St. by architect John D. Atchison, and it was decorated with 14 gargoyles. They were removed from the building in 1969 during renovations and sold to newspaper employees. At that time The Manitoba Museum received one of the statues from the Tribune – “The Printer”. This figure holds an archaic miniature printing press and grasps the handles, turning the screw and applying pressure to the paper held between two plates.

Each of the 14 gargoyles was unique, holding tools symbolic of the newspaper trade. They were dressed in medieval clothing, their bodies contorted, stunted and muscular. Even their faces were quite expressive. The terra cotta figures themselves were not carved out of stone but moulded with clay. They were posed in such a way that they leaned over passersby on the sidewalks six storeys below.  Each figure was only two feet high, and I wonder if anyone ever really noticed them, but there they sat for almost 70 years jeering at innocent pedestrians.

The second and most recent gargoyle to join our collection is “The City Editor”, donated by Helen Leeds. This figure almost carelessly holds a pair of scissors in one hand and a sheet of paper in the other. Overall, the expression and pose seem somewhat casual.

Although such figures are popularly known as “gargoyles”, that term technically only refers to statues that act as water spouts, helping to protect the architecture by taking the rainwater and spewing it far from the building. The word “gargoyle” comes from the French gargouille, meaning “throat” (think “gargle”). Our Tribune statues would more correctly be referred to as “grotesques” –
decorative exterior figures that indulge in caricature or absurdity.

One mystery remains. It is not known (yet) who sculpted these strange and symbolic creatures. I’ll post this on the blog as soon as I find out…