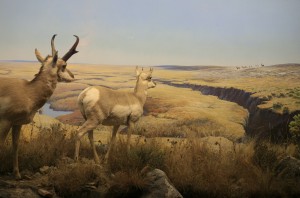 The recent passing of Clarence Tillenius brings into focus his many influences here at The Manitoba Museum. He was the creator of The Manitoba Museum’s largest dioramas, as well as a comprehensive collection of paintings and sketches. His vision of art and nature, which spanned over 75 years, indicates a persistent dedication to the life of animals and their habitats. What inspired him? Perhaps it was simply the beauty of landscapes: when I look at his paintings, well-liked by many audiences, I see a great respect for wildlife and the use of art as drama. And certainly, there is no lack of drama in nature. But as I looked more deeply into our files I found a quote from Mr. Tillenius that sheds light on his purpose.

Mr. Tillenius was born in 1913 and raised in the Interlake region of Manitoba, which had only recently been settled by European newcomer farmers. Their presence took a toll on the region’s wildlife.

As Clarence wrote, “But while I was growing up, moose, elk, wolves and bears were being destroyed, wiped out by the settler’s ready rifle, leaving only nostalgic memories of the days when their numbers were such that no one thought they could ever disappear. So while I was young, I learned that much of the fascinating world of wildlife will always be doomed to disappear with the coming of settlement by man. I grieved that it must be so, and was determined to paint pictures that would convey what I felt about this wonderful world which I believed was slipping away.”

I sense a note of resignation in this quote, but also the need to observe, record and dramatize. While Clarence “grieved that it must be so”, he acted through art to create works that would inspire younger generations. Environmental groups, schools, scientists and museums have coalesced over the decades to create not only an appreciation of nature, but a way forward to protect Canada’s wilderness.