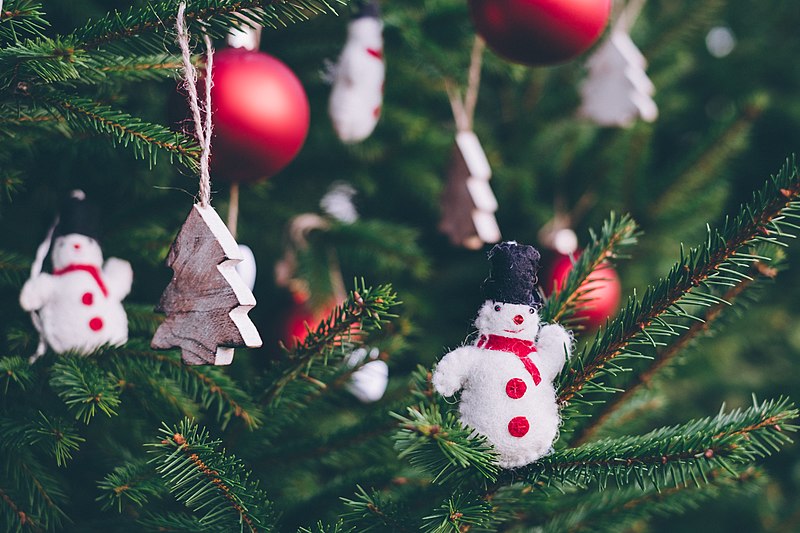 I recently read that, thanks to Covid-19, there’s been a run on Christmas trees because so many people are staying home for the holidays this year. In a world that suffers from plant blindness (i.e. an inability to see the trees for the forest), “Christmas trees”, are among the most well-known “species” of plant. Except that “Christmas tree” is not actually A species; it is ANY kind of coniferous (i.e. cone-bearing), evergreen tree that we decorate. So, if you don’t know much about conifers, here are 10 fun facts about these common trees many of us share our homes with once a year.

1. Many different species are used as Christmas trees.
Some of the most popular Christmas tree species in Manitoba are native ones: Eastern White Pine (Pinus strobus), White Spruce (Picea glauca) and Balsam Fir (Abies balsamea). Other species are non-native, most commonly Fraser Fir (Abies fraseri) and Scots Pine (Pinus sylvestris). How to tell them apart? Just remember this little rhyme about the needles of these trees: firs are flat, spruces are stiff, and pines are in pairs. 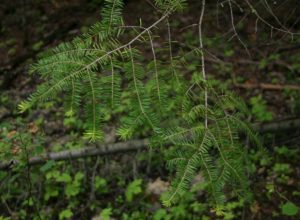 Balsam Fir is a popular Christmas tree because the needles are not shed as quickly as in spruce trees.

2. Not all conifers are evergreens and not all evergreens are conifers.
The term evergreen just means that the plants’ do not shed all of their leaves in autumn the way deciduous plants do. Being evergreen is advantageous for plants that grow in cold, nutrient-poor soils where organic matter decomposes slowly (i.e. pretty much all of Canada!). Most conifers are evergreens, but Tamarack (Larix laricina) trees are deciduous. Tamaracks can afford to regrow new needles each year because they can reabsorb many of the minerals in them before they turn yellow and fall off. Some flowering plants in nutrient-poor habitats, like Bearberry (Arctostaphylos uva-ursi), are evergreen, with thick, but broad (not needle-like) leaves that stay on all winter. 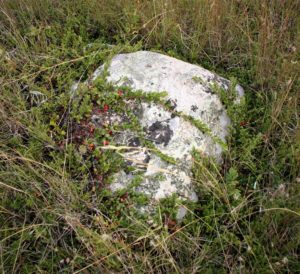 Bearberry, shown here growing over a rock, is an evergreen shrub that produces white, bell-shaped flowers and red fruits, not cones.

4. Manitoba has popping pines.
To protect Jack Pine (Pinus banksiana) seeds from predators like squirrels and birds, their cones are tough and tightly closed (i.e. serotinous). The cones will not open, sometimes for decades, until they are exposed to intense heat, such as that from a forest fire. In fact, shortly after a forest fire, you can hear the sound of Jack Pine cones popping open and releasing their seeds. You can hear this sound too, if you collect closed cones and put them near a bonfire or on top of a radiator. 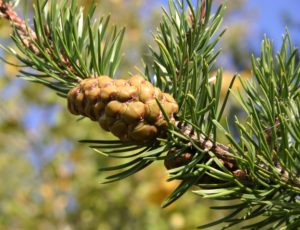 Jack Pine is a conifer that has adapted to the natural forest fires that periodically occur due to lightning strikes.

5. Conifers can fly.
The seeds of most conifers have a thin “wing” attached to them. These wings help the seeds, which are near the top of the tree, glide some distance away, so that the baby trees do not have to grow in the shade of their parent. Juniper (Juniperus spp.) and yew (Taxus spp.) seeds are contained in fleshy cones (incorrectly called “berries”), which are eaten by birds. Thus, they can also fly, although they will be in the stomach of a bird when they do. Fortunately, the seeds are usually not digested, just the fleshy part. They are usually excreted intact in the birds’ dung.

6. Conifers are always in your house (or ARE your house).
Unless you have a bidet, don’t use any paper products at all, and live in a house made entirely of straw, you have conifers in your house all the time. Paper products like toilet and wall paper, paper towel, newsprint, cardboard and printing paper are all made, at least in part, with “softwood” trees, which are conifers. As well, much of the timber we use to build our houses and furniture comes from conifer trees like pine and spruce. If you eat pesto sauce or drink gin, you are also consuming conifers. Pesto sauce is typically made with pine nuts, and gin is usually flavoured with juniper cones.

7. A conifer is Manitoba’s provincial tree.
Manitoba’s provincial tree is White Spruce (Picea glauca). This is the dominant conifer in North America, growing in every Canadian Province. Their life span is relatively short, about 250-300 years old, in part because spruce forests become more susceptible to wildfires as they age. White Spruce provides much of the habitat for migratory songbirds and small boreal mammals, which eat the insects that live on them, or the seeds of their cones. Crossbills (Loxia spp.) and squirrels are busy eating White Spruce seeds right now, even here in the city. 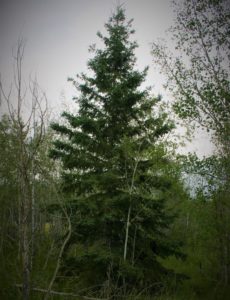 8. Conifers are the oldest trees.
The Great Basin Bristlecone Pine (Pinus longaeva) is the worlds’ longest-lived, non-clonal tree species, typically surviving for thousands of years. The oldest individual of this species, found in California, was estimated to be just over 5,000 years old, so it germinated several hundred years before the Egyptians built the first pyramid. 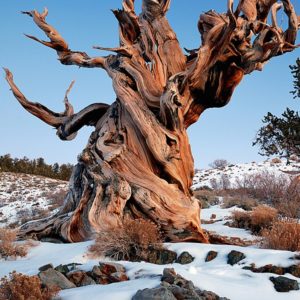 The oldest trees in the world, Great Basin Bristlecone Pines, look just as you would expect an ancient tree to look: gnarled and knotty. From Wikimedia Commons.

9. Conifers are the biggest trees.
A tree named “General Sherman” is the largest tree in the world at 1,487 cubic metres. It is almost 84 metres tall, about the height of a 26-story building, and has a 31-metre circumference at ground level. It is a species of Giant Sequoia (Sequiadendron giganteum), and can be found in Sequoia National Park in California. They make bad Christmas trees, cause who could ever get the star on top? 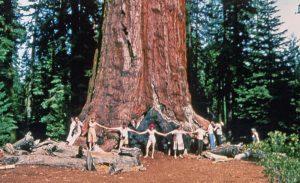 A Giant Sequoia with people at the base for scale. From Wikimedia Commons.

10. Dinosaurs ate conifers.
Conifers are the oldest seed plants; they evolved about 300 million years ago in the Carboniferous Period. Unlike the earliest land plants, which still needed water to reproduce, conifers did not: their sperm became contained in pollen grains, which could be transported to other plants by the wind instead of water. This enabled conifers to live in relatively dry areas. They became the dominant plants during the “Age of Dinosaurs”: the Triassic, Jurassic and Cretaceous Periods. So, any plant-eating dinosaurs would probably have eaten conifers. Fortunately, dinosaurs are extinct so they will not eat your Christmas tree.

Wanting more conifer trivia?  Check out this post from the past to learn why people drank conifer “beer”: https://manitobamuseum.ca/drinking-christmas-trees-that-is/