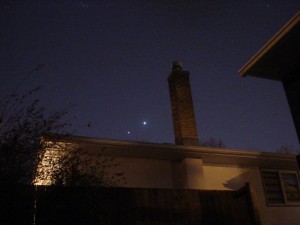 Jupiter and Venus have been engaged in a beautiful dance in the western sky after sunset. With the warm weather, I’ve been running outside in shirtsleeves every few minutes, waiting for the light levels to be at their best for viewing. A little point-and-shoot camera on a tripod is all you need to capture this dramatic dance of the planets.

Right now, Venus is rising higher and higher each night, while Jupiter is sinking lower into the sunset colours. Still, they’ll be together in the field of view of any camaera for a couple of weeks. Set your camera for “twilight portrait” or the closest thing – usually it’s a little moon symbol on the dial – and put ti onto a tripod. The tripod is imoprtant because the exposure is going to be a second or mroe long, and you just can’t hold the camera steady enough during that time. If you don’t have a tripod, I have just set it on the ground with a rock under the front to tilt it up towards the correct angle.

Try and put something in the foreground if you have a choice – trees, houses, or whatever provide context and add the third planet into your picture – the planet Earth, our viewing point for the cosmic ballet occuring overhead.

If you aren’t happy with the picture your semi-intelligent camera computer comes up with, you can fall back on an old technique from the film days: bracketing. Set the camera for “manual” mode, and start with a 1 second exposure time. Then takes several shots with exposure times on either side of that, both higher and lower. Basically, shoot one image at each setting on the dial or each click of the button. You’ll get a whole range of pictures with different colour  depths, contrast, and definition. In the days of film, this was essential since you couldn’t see your results until after you had developed the film… sometimes a whole night’s work would come back out of focus or underexposed due to an error that went uncorrected under the sky. Nowadays, bracketing is just a way to explore the full depth of the scene before you, and reveal views very different from what your eyes see. Your images won’t replace the view of seeing it live, but they will remind you of your observation, and give you another perspective from which to contemplate the dance of the solar system.