On occasion I’ve met people who would ask, in reference to a plant that I was studying, “what good is it?”  I was initially somewhat baffled because I assumed that most people knew that plants are needed for an ecosystem to function properly, and that since ecosystems provide humans with clean water and air, they are important.  But sadly many people view species from a complete utilitarian viewpoint, assuming that if you can’t eat it or cut it down to make furniture, it is useless and therefore expendable.  One argument for the conservation of all plants is that we simply don’t know which ones may yield chemicals potentially useful to humans.  What is considered a useless plant one day could be a life saver on another. 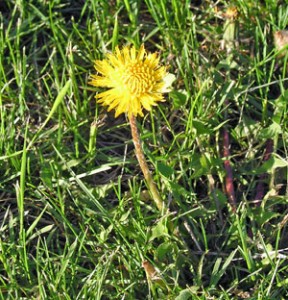 The Pacific Yew tree (Taxus brevifolia) was long considered a “weed” by foresters.  In the 1960’s an extract from this species called paclitaxel was found to kill cancer cells.  The drug Taxol was approved by the FDA in 1992 and is now a commonly used in the treatment of ovarian and breast cancer.

It was nice to hear that another much maligned plant, namely the common dandelion (Taraxacum officinale), is also being investigated for its anti-cancer properties (http://www.cbc.ca/news/health/story/2012/02/16/wdr-dandelion-tea-cancer-killer.html).  An extract from dandelion roots dug out of the lawn by graduate students at the University of Windsor was found to kill leukemia cells but not healthy cells (http://web4.uwindsor.ca/units/pac/nvdailynews/nvdn.nsf/ba/f123e65da4f69193852577a500566027).  I find it very ironic that a plant that people have spent thousands of dollars trying to get rid of (in the process of doing so exposing themselves to potentially cancer-causing toxic chemicals) may actually hold the key to curing a form of cancer: leukemia. 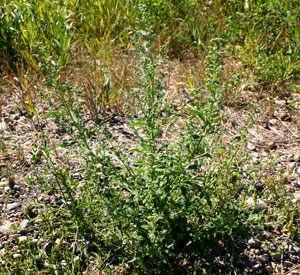 Lamb's-quarters is an exotic weed that is edible and nutritious.

What people may not know is that dandelions have actually been used medicinally in ancient China and in Europe since at least the 11th century for its diurectic and detoxifying properties.  Modern herbalists prescribe dandelion root for a variety of ailments.  The dried roots are typically harvested, dried and brewed to make a tea that tastes somewhat like coffee.  Dandelion leaves are also edible and very nutritious, being especially high in vitamins A and C.  You can collect the young tender leaves and throw them in a salad (just make sure they come from a lawn that hasn’t been doused with herbicides!).  The roots and flowers can also be made into alcoholic beverages such as dandelion wine and root beer.  Other “weedy” plants that are edible include burdock (Arctium spp.) (its roots are edible) and Lamb’s-Quarters (Chenopodium album) (it’s leaves are very nutritious).  Burdock seed heads were actually the inspiration for velcro!

Ralph Waldo Emerson said that “a weed is a plant whose virtues have not yet been discovered”.  It’s time for us to appreciate the virtues of weeds like the dandelion!