For the last two years I have been searching for four species of rare Bugseed (Corispermum spp.) plants.  Historically these plants were found in sand dunes and along the beaches of Lakes Winnipeg and Manitoba.  Unfortunately there were very few recently collected specimens; most had been collected over 40 years ago.  Attempts to determine the rarity status of these plants were hampered due to this lack of information. 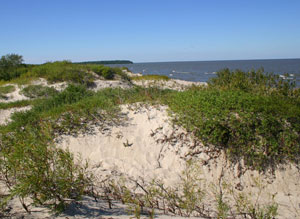 A new population of Hairy Bugseed was discovered at Grand Beach!

During my field work I relocated fewer than half of the historical populations of Bugseeds indicating a substantial loss of habitat.  In some cases, dune stabilization appears to have resulted in the loss of habitat for these species, which grow in bare sand.  Flooding along the Red River and on Lakes Manitoba and Winnipeg in 2010 and 2011 may have also caused the loss of habitat as several historical populations had been previously found on the beaches, dunes and sandbars along the south shore of these lakes.  Balancing out the losses a bit was the discovery of seven new localities in the province including a very large population of Hairy Bugseed (C. villosum) in the sand dunes in Grand Beach Provincial Park. 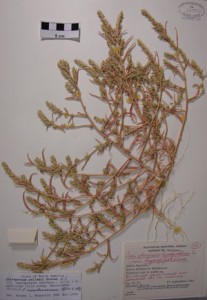 Pallas Bugseed has not been seen in Manitoba in over 60 years!

Unfortunately, I could not locate any Pallas Bugseed (C. pallasii) at the three sites where it was historically found although I did find some American Bugseed (C. americanum) at two of the sites.  Pallas Bugseed is still present in other Canadian provinces so it is not extirpated in the country.  It is possible that this species spread into Manitoba from other provinces where it is native along railways and then subsequently disappeared as more hardy weeds took over the habitat.  As the seeds of these species are quite long lived and tolerant of burial, Pallas Bugseed may still be here in the province, hiding in the soil and waiting for the right conditions to germinate.