Taxonomists: The Curious George’s of Science

At the heart of every taxonomist is a curious little monkey who just can’t stop exploring the world around him or her, sometimes to their detriment.  I was reading a great book called “The Plant Hunters” by Tyler Whittle and was amazed at the trials and tribulations that early botanists like William Dampier (1651-1715), Philibert Commerson (1727-1773) and David Douglas (1799-1834) went through.  Curiosity drove them to explore the remote areas of the world under extremely difficult circumstances in the hopes of finding plant species unknown to Western scientists.  Many of the specimens that these men collected can still be found in European herbaria, providing us with a valuable snapshot of the past. 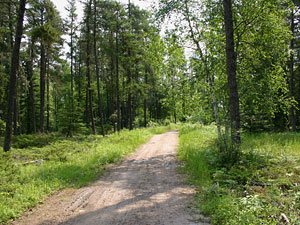 What exciting plants and fungi are lurking along this trail?

I sympathize with these men every time I gaze at a grassland or remote forest and feel the urge to explore.  There’s nothing like rounding the corner of a trail and seeing an unusual plant or fungus hiding under a bush–very exciting.  Then comes the detective work: trying to figure out exactly what it is you’ve found.  As this part can take a while, it helps to be a patient and observant person.  For this reason many of the best taxonomists are introverts; people who work well alone and possess the uncanny ability to focus on one thing to the exclusion of all others.  Introverts are the ultimate uni-taskers; a skill that is unfortunately undervalued in our society.  Sometimes, despite all my best efforts, I just can’t figure out what something is.  Then I need to show my mystery specimen to someone who has a bit more expertise with the group of plants or fungi I’ve collected. 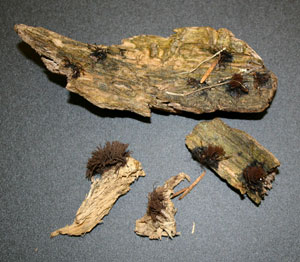 It took me quite a while to determine that this strange thing was a slime mold!

How about you?  Have you ever seen a mysterious plant or fungus that you just couldn’t identify?  If you were in Manitoba, Saskatchewan, eastern Alberta or northern Ontario, I may be able to help you, or if not, I can put you in touch with someone who can.  I can identify some plants and fungi from good photographs but it is usually preferable to have the actual specimen.  Most plants and fungi can be collected without killing them as long as the root system is left intact; orchids are the exception as they typically have only one stem and are sensitive to disturbance.  The Native Orchid Conservation Inc. has a great field guide called “Orchids of Manitoba” if you are interested in identifying these plants. 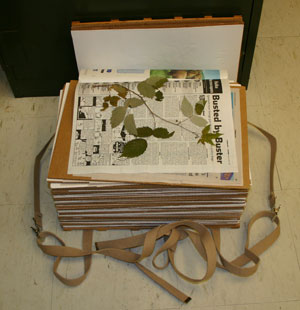 A plant fresh out of the press.

If you wish to bring a specimen in to the Museum for identification, please call first to make an appointment as I am often in the field over the summer.  Vascular plants and mosses can be brought fresh in a plastic bag with some moist paper towel inside, or pressed and dried between two sheets of newspaper.  If you don’t have a plant press, you can use several large books to weigh it down.  Try to collect specimens with leaves and flowers or fruits as you need both to identify some species. 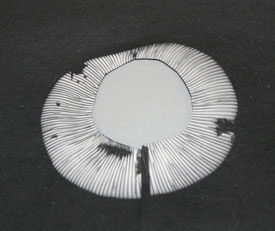 If you wish to bring in a fungus, it should be kept in a paper bag as plastic will make it go slimy.  As some mushrooms get eaten by maggots quickly, they need to be brought in soon after picking or dried using a fan, dehydrator, silica gel dessicant or a warm (140°F/60°C) oven.  Since dried mushrooms change colour quite drastically and shrink in size, photographs and measurements of the cap and stem are useful.  A spore print, made by laying a mushroom cap over a piece of paper and covering it with a glass or bowl for a few hours, is also useful for mushroom identification.  Happy hunting! 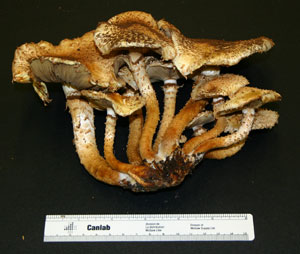 Photographing the fungus while fresh with a ruler can aid greatly in identification.